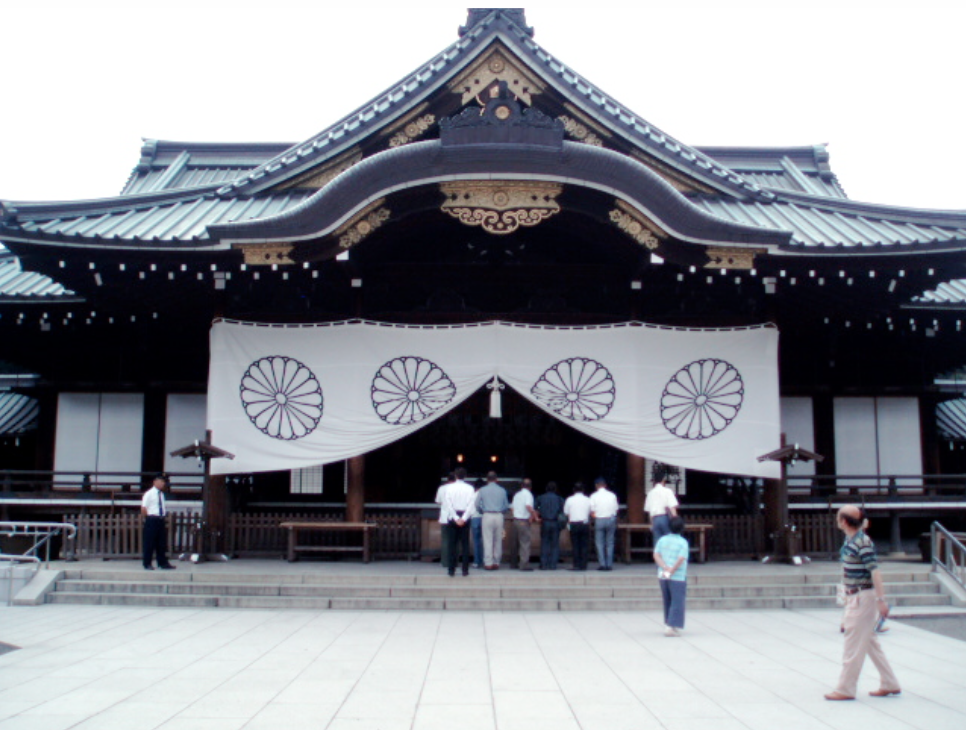 On Boxing Day, Japanese Prime Minister Shinzo Abe paid a provocative visit to the controversial Yasukuni Shrine, which houses the remains of notorious Japanese war criminals. It was the latest episode in a rising tide of Japanese militarism under Abe. (Photo: plebeian regime / Flickr)

It was a Thursday in Tokyo, the day after Christmas — what is known in some countries as Boxing Day. This time of year in late December is associated with the spreading of good cheer and happiness. Though this is not a strongly religious country and certainly not a Christian nation, the Japanese love an excuse to look at sparkling tree lights and become shopaholics as much as anyone.

But on this Boxing Day after Christmas, all that good cheer had dissipated. It gave way not so much to the end-of-year tradition of boxing up as to the feeling of being boxed in.

Boxing Day 2013 turned out to be the release date for Prime Minister Shinzo Abe’s new album, Abe Road. The album contains such singles as “Come Apart,” “He Came in through the War Shrine Gate,” and “Japan Sun King.” The music is a mixture of traditional folk tunes, war chants, and heavy metal with a testosterone-pumping bass. Critical response to Abe Road has been harsh, particularly from traditional Northeast Asia rivals like China and Korea, which recoil at Japan’s aggressive war past, but also from Japanophiles like me who oppose the country’s new mano y mano political posture.

It’s to be expected that regional rivals will take every ideological advantage of Japanese missteps, raising hackles about Japanese militarism. After all, China was the regional bogeyman of November with its announcement of an air defense identification system over the East China Sea, including disputed islands. But on Boxing Day, Abe stole China’s thunder with a visit to Tokyo’s controversial Yasukuni Shrine, which memorializes notorious war criminals alongside Japanese soldiers. Tokyo disingenuously painted the trip as just a domestic visit to pay homage to the war dead, but critics saw it otherwise.

What Abe and his inner circle don’t grasp is that when it comes to the prime minister’s rhetoric and actions, there is no divide between the domestic and international. Global and domestic headlines now scream in unison that Japan is “on a dangerous path,” as a particularly critical staff editorial from The Japan Times put it in late January.

The rallying cry “We’re back!” at one time referred to Japan’s roaring economy from the 1960s through the early 1990s, culminating in the 1991 economic chest beating of Shintaro Ishihara’s The Japan That Can Say No: Why Japan Will Be First Among Equals. Today “We’re back!” is much more likely to conjure up images of surveillance drones and amphibious assault vehicles. As The Japan Times warned:

If the Abe government achieves its goal, it will pave the way for Japan to engage in military operations abroad with other countries, especially the United States. Such a change would completely alter postwar Japan’s basic posture of “defense-only defense,” which is designed to ensure it will not repeat the mistake of walking the path to war as it did in the last century — with tragic results for both the region and Japan. The “defense-only defense” posture helped Japan regain the international community’s trust in the postwar period.

Building trust with major trade partners in the region, much less with the international community, is not a major theme of this administration. Consider NHK, Japan’s version of the BBC, whose board of directors was recently stacked with four new pro-Abe members. Newly installed into his three-year post, NHK Chairman Katsuto Momii gave his first news conference on January 25, and it was nothing short of bizarre in its transparent alliance with Abe’s Liberal Democratic Party positions. “When the government is saying, ‘Right,’ we can’t say, ‘Left.’ International broadcasting has such a (propagandist) nuance,” said Momii.

He downplayed Japan’s role in the World War II-era “comfort women” racket, which he said has been wrongly relabeled “sexual slavery” by human rights activists. Translation: Everyone was doing it, not just the Japanese, and these women had their role to play too in the war. He said there is no point in questioning Japan’s highly controversial state secrets law and even promised that NHK’s international programming, including its NHK World English-language program, would not challenge the government’s position on the disputed Senkaku/Diaoyu islands. It was like seeing Karl Rove head up Voice of America.

Pump Up the Volume

Abe’s hit-making machine conjures an image of a country in search of its T-zone after lost decades of economic stagnation — the political economy equivalent of a low testosterone, or “Low T,” count. Abe’s drive to expand Japan’s military and economic prowess is a reinforcement of masculine politics at work.

The chatter about “Womenomics” that accompanies Abenomics is more show than go. Although Abe is publicly acknowledging the importance of women in Japan’s economic revival, the systemic value of women is not the hill that anyone is willing to die on in Japan.

The World Economic Forum ranks Japan 105th out of 136 nations in its 2013 Global Gender Gap Report, which measures the economic, political, education, and health differences between men and women. Female executives make up just 11 percent of managerial jobs in private business, and nearly two-thirds of Japanese women quit their jobs and careers altogether after giving birth the first time.

Politics in male-focused societies like Japan, and in most cultures today, is all about dominance, competition, and superior performance. Abe, as an old fashioned patriarchal guy, wants to be a Top Dog like Bush, Putin, or most any 11th-grade jock. Women are welcome to come along for the ride as long as they don’t challenge the status quo.

Fighting Back on Boxing Day

Abe chose the day after Christmas to visit the politically incorrect war cemetery at Yasukuni Shrine. Home to two and a half million war dead, the shrine also honors 14 Class A war criminals and mass murderers involved in some of the worst atrocities of World War II, with infamous names like the Rape of Nanking. Former wartime Prime Minister Hideki Tojo’s ashes are there, which should be grounds alone for avoidance. It had been seven years since a sitting prime minister had even visited Yasukuni Shrine. Visiting the shrine was increasingly like exposing oneself to political radiation. Even Vice President Joe Biden spent an hour on the phone trying to convince Abe not to traverse the shrine’s gates, to no avail.

But Abe is traveling to the beat of a different drum: the Ō-daiko (barrel drum) spirit of his ancestor. Abe watchers know that that Shinzo Abe idolizes his maternal grandfather Nobusuke Kishi, with whom the prime minister identifies more than with his own father, Shintaro, a former foreign minister who inspired the Abe Fellowship that sponsors my research. Kishi, who died in 1987 when Shinzo was 33, is as important to his grandson’s legacy as George Martin was to The Beatles. He seems to be a constant silent presence behind every step that Abe takes.

Kishi has an extraordinary biography that overshadows that of the once politically humiliated Shinzo Abe, who left his first term after 12 months in 2007. Characterized as a Class A war criminal, Kishi was held in prison for three years during the U.S. occupation of Japan, but was later released with other accused in an effort by the United States to shape post-war Japan as an ex-Fascist, anti-Communist nation.

As minister of commerce and industry in the cabinet of Hideki Tojo, Kishi was in on the decision to attack Pearl Harbor and incite America’s entry into the war. He is also the postwar godfather of the conservative Liberal Democratic Party that has maintained a stranglehold on Japanese politics for nearly 60 years. Japan’s current prime minister has been fervently committed to rehabilitating his grandfather’s reputation as a man of great patriotism and devotion to the Japanese state.

Ex-prisoner Kishi would miraculously rise from the ashes to serve as prime minister and push the U.S.-Japan Security Treaty through the Diet in May 1960. Kishi originally opposed the security treaty that was forced on Japan, but the 1960 version was seen as a compromise to earn favor with Washington, though it led to mass protests by right-wing nationalists, which would accelerate Kishi’s resignation two months later. It is that same security treaty that grandson Shinzo Abe is now trying to revamp from one that mandates a defense-only Japan protected by the United States to an increasingly independent Japan on the offense.

Abe might have pragmatic side when it comes to the economic reforms that have spurred on the economy over the last year. In his geopolitics, however, there is no nuance or pragmatism—only T-zone flexing.

When The Beatles released Abbey Road in 1969, it turned out to be their last studio album, and arguably one of their best ever. One of the album’s singles was “Come Together.” A year later, the band fell apart, to the music world’s sorrow. The “hits” of Abe Road are like fatal arrows to the back of public restraint, dissent, and participation. Unless the citizen’s voice gets raised in Japan, the hits will keep on coming.

Nancy Snow is an Abe Fellow and Visiting Professor at Keio University. She is completing a book on Japan’s nation image brand since 3/11. She is Professor of Communications at California State University, Fullerton, author/editor of nine books, and currently lives part-time in Tokyo. Reach her at www.nancysnow.com.