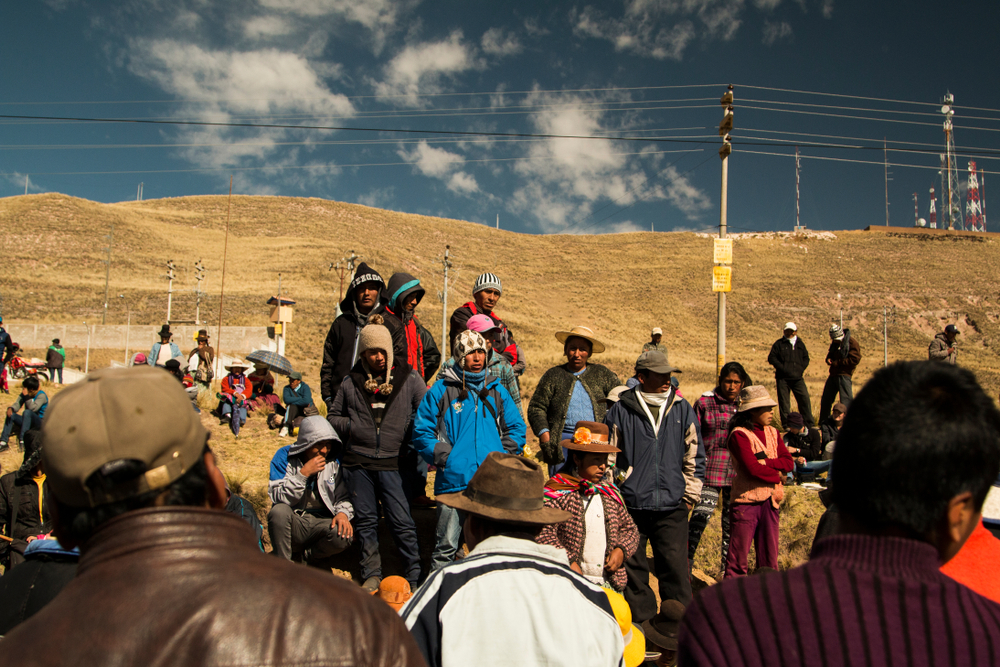 In countries like Peru, extractive industries contract police to suppress Indigenous protesters and detain international observers — including me.
By Jen Moore | October 21, 2019

As we left the Cusco Cultural Center after a Friday evening screening, we were surrounded by 15 to 20 plain clothes police and a handful of immigration officials.

They brought us to the Cusco immigration office, where they detained and interrogated us for four hours — the maximum time permitted by law. We were finally released after midnight, thanks no doubt to pressure from friends and colleagues in Peru, throughout Latin America, and in the U.S. and Canada.

It was political detention, and the Interior Ministry made no secret of it.

Less than 12 hours after our release, the ministry released a communiqué accusing us of violating our tourist visas and posing a threat to public order by talking about the risks of mining, and by “inciting” communities to oppose mining activities. The ministry defended Hudbay’s mining operations — and said we should be expelled.

Concerned for our safety and upon advice from our lawyers, we left Peru that same day. The next day, we were indefinitely banned from re-entry.

Hudbay operates the Constancia open-pit copper mine in southern Peru. John had filmed there in late 2014, when the community of Uchuccarco was protesting the company’s failure to live up to promises related to environmental monitoring, jobs, and social projects. Women were out in particularly strong numbers.

The footage John captured, which appears in the documentary, shows national police firing teargas at men and women during a protest in which at least 17 were injured.

Why would police fire at demonstrators? Because Hudbay, like many mining, oil and gas companies operating in Peru, has a contract with police for its security services. The police, in short, had sold themselves to the company as private security guards.

At the time, human rights observers saw police both inside and outside the company gates, including some dressed in ponchos with company logos holding police riot shields. This is characteristic of police work on private contracts, in which they often use state-issued arms and uniforms while defending company interests.

In 2017, I was working as the Latin America Program Coordinator for MiningWatch Canada and collaborating with the Peruvian organization Human Rights Without Borders — Cusco and Cooperacción. We worked together to organize screenings of John’s film in communities near Hudbay’s mine, as well as in Cusco and Lima.

Even before we arrived, efforts were underway to derail our plans. An anonymous columnist published a defamatory article accusing us and our Peruvian counterparts of organizing “an ambush” against Hudbay.

And in the days leading up to our detention, we were filmed by unknown individuals, while community leaders reported being questioned by police and company representatives about the screenings. At our last community stop, the film screening was suddenly canceled, and police tried to get our personal information from a hotel we had stayed in.

Shortly afterward, we were detained in Cusco.

John and I were convinced that Hudbay was involved. But the company denied any role.

Finally, this fall — two and a half years later — a Lima court ruled in our favor in response to a habeas corpus motion filed on my behalf by the Institute for Legal Defense (IDL), Human Rights Without Borders – Cusco (DHSF), the Association for Life and Human Dignity (APORVIDHA), and Cooperacción.

The decision states that sharing information about the negative impacts of mining does not threaten public order, nor does it violate migratory law in Peru. Rather, it is part of exercising one’s rights. As such, the court found that our detention was a violation of both our individual rights to freedom of expression, as well as local communities’ collective rights to obtain information.

Significantly, these violations occurred as a direct result of the police’s contract with Hudbay, which the judge ruled had caused the police and Interior Ministry to act with bias in the company’s interest.

The ruling is subject to appeal, but it’s a good first step — for us and for other journalists, filmmakers, academics, public interest researchers, or independent technical consultants who might seek to share critical views about the negative impacts of extractive projects with communities in Peru.

The truth is, John and I got off light.

In an area not far from Cusco, police repression against Indigenous communities protesting environmental contamination in 2012 ended with dozens injured and two dead. And Peruvians often face much more punitive legal proceedings than we did.

For instance, the governor of Puno province has been sentenced to six years in jail for allegedly organizing Aymara Indigenous communities to protest mining concessions for the Canadian company Bear Creek Mining in 2011, over very real concerns about the water contamination that results from gold mining.

Laws like the one that allows police contracts with mining companies are just one example of how the law has been turned against Indigenous peoples and mining-affected communities in Peru and elsewhere, making fighting mega-projects an ever more dangerous vocation.

Meanwhile, laws favorable to extractive industries have been entrenched with support from the World Bank and governments in the Global North. These laws typically privatize mineral extraction, make permitting processes easier, and keep taxes and royalty payments to a minimum.

Moreover, thousands of international trade agreements lock in investor interests by letting transnational corporations sue democratically elected governments for public interest regulations or other government decisions that may affect the value of their investments in binding arbitration courts.

Against this backdrop, while the recent court decision is an important moment in the fight against putting police in the pay of corporations, it’s only a small step in a much bigger struggle against the ever greater dangers facing those defending their territories against devastating mega-projects.

Jen Moore is an Associate Fellow with the Global Economy Program at the Institute for Policy Studies.