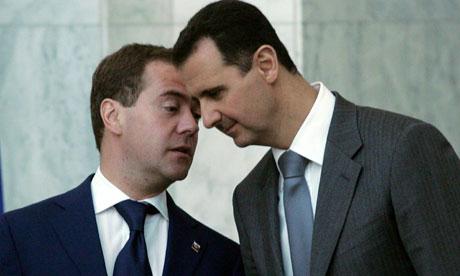 Giving military aid to either side of the Syrian conflict will make civil war more likely and prevent the citizens of Syria from achieving any semblance of justice and freedom.
By Anya Barry | February 13, 2012 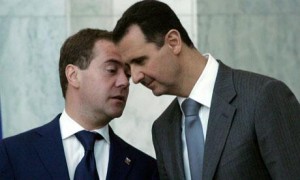 Despite the widespread international denunciation of Syrian President Bashar al-Assad, the government in Damascus continues to crack down hard on the country’s growing domestic opposition. “They are moving in a direction that completely shows that they are absolutely out of touch,” says Yasser Tabbara, the secretary general of the Syrian National Council (SNC), a government opposition group. Other countries in the region have experienced revolutions, but Syria remains in a state of uncertainty. At the UN, China and Russia vetoed a Security Council resolution condemning the Syrian government’s actions, making a coordinated international response even more difficult.

Meanwhile, as the conflict rages on, Syria continues to receive shipments of military supplies—specifically from countries like Iran, Lebanon, and Russia. In January, Russia inked a lucrative deal with the Syrian government to sell approximately $500 million worth of military arms in the form of 36 Yak-130 aircraft combat jets. Russia’s actions have caused significant outcry from the international community. High-ranking officials such as U.S. Ambassador to the United Nations Susan Rice as well as other Western diplomats have stated their strong disapproval of Russia’s move. Over the past 10 months, Syria’s escalating violence has resulted in the deaths of 5,400 civilians. Russia’s combat jets are specifically designed to shoot targets on the ground, which could lead to an increase in the civilian death toll.

In response to the ongoing problems in Syria, the Moroccan delegation to the UN introduced a resolution calling for an arms embargo on Syria and for Assad’s resignation. Russia vetoed the resolution, claiming that it would precipitate regime change and a possible civil war. As Russia’s Deputy Foreign Minister Gennady Gatilov stated, “there is no clear line between arms contraband that some countries engage in to support extremist forces in Syria, and the legal military-technical ties with this country.” Russia has claimed that the violence occurring in Syria is the result of opposition groups rather than Assad’s security forces. One rebel group, the Free Syrian Army, has been trying to smuggle weapons across the border through Lebanon, but the amounts pale in comparison to what the Syrian security forces have been receiving from abroad.

According to Business Insider, Syria is one of Russia’s largest weapons consumers, purchasing around $4 billion total in military supplies. Additionally, Syria’s port of Tartus, where Russia recently sent an aircraft carrier, serves as Russia’s sole naval base in the region. Russia has also invested around $19.4 billion in Syria’s infrastructure and exports about $1.1 billion in goods to the nation. If Assad were to resign, Russian business interests could be seriously put at risk. An additional motive for Russia’s staunch support for the Assad regime is the concern that if Syria’s government were to crumble, it could have a domino effect in the nearby Russian North Caucasus region.

Over the last 20 years, Russian arms exports to Syria have generally outweighed shipments from other countries, according to SIPRI. Since 1992, Russia has sold $525 million in military equipment to Syria. The largest of these sales occurred in 2009 and 2010, consisting of $162 million in exports each year. The only nation to come close to these sales is North Korea, with $306 million in exports, but it hasn’t sent anything since 2004. More recently, records show a significant transfer of weapons from Belarus, totaling out at $196 million between 2003 and 2008. Since 2006, Iran has also sold Assad’s regime $64 million in ammunitions and weaponry—an amount that has almost certainly grown in recent months as Syria’s turmoil escalates.

Another recent development in the conflict in Syria is the shipment of Iranian arms, by trucks disguised as vegetable and fruit produce, across the Iraqi-Syrian border. Iraq’s Prime Minister Nouri al-Maliki granted permission for the arms to be shipped through Iraq, enraging the Syrian opposition. Originally, Iran intended to send the weapons into the country by air, but Turkey demanded that the planes—which were in their airspace—land for inspection. Iran turned to the land route through Iraq instead.

Lebanon has also developed into a lucrative source of black-market arms deals across the porous border it shares with Syria. According to reporter Nicholas Blanford, the consumers of these black market weapons are generally protesters angry at the president and his regime, or those who feel the growing need to protect themselves due to the escalating unstable climate in Syria. These black-market weapons are fueling an increase in violence in several cities along the Lebanese-Syrian border, such as Homs, where Syrian opposition members have established their stronghold. The Lebanese government itself has placed its support in Assad’s government, since stability in Damascus translates into economic security for Lebanese exports.

One nation has voiced particularly strong support for Syrian opposition forces—Libya. In October, the newly formed government in Tripoli was the first to recognize the SNC, the country’s main opposition group. The Libyan government also went so far as to open the nation’s borders to any Syrian refugees who wished to take up residence in Libya.

One month later, Syrian rebels from the SNC met with members of the Libyan government, requesting military assistance. As Wisam Taris, a human rights worker with connections to the SNC explained, “The Libyans are offering money, training and weapons to the Syrian National Council.” Since that time, there have been many rumors that the SNC has negotiated with Libya to secure arms for the more militant Free Syrian Army. The SNC, which has emphasized nonviolent resistance, has denied the rumors. “The Free Army must act in a way suited to the goals and the aims of the SNC,” explains SNC member Khaled Khodja. “The duty of this group is to protect, not to attack.”

Solutions for a Complex Conflict

When asked whether the United States would consider arming the Syrian rebel forces, White House spokesperson Jay Carney responded, “We are not considering that step right now.” Officials in the State Department have hinted, however, that this option is not altogether off the table. In Congress, Senator John McCain (R- AZ) has voiced his own support for arming the opposition: “We should start considering options, arming the opposition…. the bloodletting has got to stop.” But the White House has remained adamant that sanctions and international pressure have gradually weakened Assad’s regime.

At this point, the Obama administration has wisely chosen not to add fuel to the Syrian fire. Giving military aid to either side of the Syrian conflict will make civil war more likely and prevent the citizens of Syria from achieving any semblance of justice and freedom.

Diplomatic solutions, moderated by the Arab League, must continue to be applied to pressure Assad to respect the demands of his people and give up power to an individual of their choosing. Lebanon must discontinue its funneling of black-market arms into Syria, and Russia and Iran must suspend their shipments as well. In a glimmer of hope, Russian officials have hinted that, should the Assad regime show signs of decline, they would back a UN resolution. As one top Russian official stated, ‘“if sanctions could help stop violence and maintain stability… we would be the most decisive supporters.” Convincing Russia to stop the flow of arms to Syria might ultimately have more impact on Assad’s behavior than all the diplomatic efforts of the international community.

Anya BarryAnya Barry is a contributor to Foreign Policy in Focus.