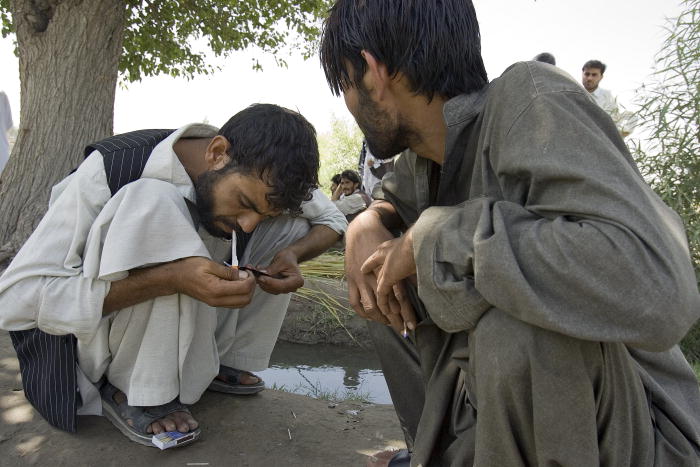 The Afghan Drug War after 2014

If costly drug war strategies in Afghanistan have been unsuccessful even with a strong U.S. military presence, they won’t stand a chance after the U.S. withdraws.
By Alex Pollard-Lipkis | March 12, 2014

As the United States slowly draws down from Afghanistan, the country’s long-term security will hinge on more than just troop numbers and reconciliation talks. Counternarcotics strategy will also play a significant role.

The narcotics trade has been a financial boon for the insurgency in Afghanistan, a country that is responsible for more than 80 percent of the world’s opium supply. The nexus between drug profits and terrorism funding means that opium trafficking is more than just an Afghan problem — it’s an international security threat.

Current indicators are not encouraging. If we keep on the same drug war path, we’ll never get off it.

The United States has played a central role in developing and supporting Afghan counternarcotics strategy for well over a decade. Since 2002, the U.S. government has appropriated $7.5 billion for counternarcotics funding in Afghanistan, which accounts for 7 percent of the $102 billion that Washington has appropriated for relief and reconstruction in the country. Despite this enormous investment, Afghan opium poppy cultivation increased by 36 percent from 2012 to 2013 — a record high, according to the United Nations Office on Drugs and Crime.

If costly interdiction and eradication strategies have been unsuccessful even with a strong U.S. military presence, they won’t stand a chance after 2014. Even if the United States can provide the Afghan government with the necessary training and support to pursue these strategies, no amount of funding can create the political will to aggressively confront all aspects of drug production and trafficking.

But the drug warriors are undeterred. At a recent hearing before the House Subcommittee on the Middle East and North Africa, William Brownfield, Assistant Secretary of State for International Narcotics and Law Enforcement Affairs, conceded that U.S. counternarcotics programs are “works in progress,” but insisted that continued counternarcotics support is essential to success in Afghanistan. But increases in poppy cultivation and the reported decline in poppy eradication by provincial authorities over the past several years indicate that current supply-side strategies just don’t work.

In a repeat of Plan Colombia, eradication has left rural Afghan farmers without a steady income and more vulnerable to the influence of extremist groups and black market traders. And as long as opium remains valuable, the crops that have been eradicated will always be replaced. Successful poppy eradication in one area simply drives opium production to another area — and drives up the price in the process. This phenomenon is called “the balloon effect,” since squeezing a balloon in one spot simply causes it to expand in another.

Interdiction programs — that is, efforts to seize illegal drugs and prosecute traffickers — may seem like an intuitive approach to combating the drug trade. But these programs have failed as spectacularly as crop eradication.

James Capra, Chief of Operations for the U.S. Drug Enforcement Administration (DEA), has attempted to show progress in Afghanistan by pointing to increased narcotics seizure and conviction rates. But in reality these are poor indicators of strategic success. Higher interdiction numbers merely reflect increased production rates, and the drugs seized by interdiction teams are just drops in the bucket compared to what leaves Afghanistan every day undetected.

As the most unskilled and least effective couriers are caught, the most innovative and effective networks raise their prices and carry on. Higher risk premiums mean bigger profits, which are used to buy the loyalty of corrupt law enforcement and government officials who can ensure safe passage for future transports.

High-ranking drug warriors like Brownfield and Capra are naturally reluctant to admit that their costly interdiction and eradication programs have failed, but continued funding for ineffective policies is never going to yield favorable results. Successful counternarcotics strategies are going to require a radically different approach from the status quo — one that replaces the punitive model of drug prohibition with a model that emphasizes public health and socioeconomic development. Prioritizing alternative development programs and demand reduction strategies would be a great place to start.

A common approach is to incentivize poppy farmers to switch to legal crops. But programs to replace opium poppies with legal alternatives won’t succeed unless the authorities pursue a more holistic approach than they have in the past. Simply giving farmers seeds to plant in lieu of poppies won’t impact poppy cultivation unless other Afghan crops have been marketed as a viable option to importers. Efforts to improve Afghanistan’s agricultural export potential can decrease the necessity for Afghan farmers to cultivate opium poppies. Furthermore, these efforts would strengthen the country’s legitimate economy without propping up the illicit drug trade.

Demand reduction is also vital to a successful counternarcotics strategy. Programs must focus on providing accurate drug education and accessible treatment programs, and treat drug addiction as a matter of public health rather than a crime. For example, countries such as Switzerland, Germany, Denmark, the Netherlands, and the United Kingdom have “significantly reduced consumption of illicit heroin and even illicit cocaine” with heroin-assisted treatment programs—also known as “free heroin” programs — that help addicts recover with controlled doses of synthetic heroin. Meaningful demand reduction of heroin and other opiates will devalue opium on the black market, making drug trafficking a less viable source of funding for terrorist organizations operating in Afghanistan.

There is no silver-bullet solution to the narcotics production problem in Afghanistan. Successful counternarcotics operations will rely on comprehensive and sustainable strategies that address the issue from all sides. However, any strategy that does not align with Afghan interests and priorities will fail. As the United States withdraws from Afghanistan, the onus will be on President Ahmed Karzai, his successor, and the Afghan government to break the narco-terrorism nexus.

Alex Pollard-Lipkis is a contributor to Foreign Policy In Focus.