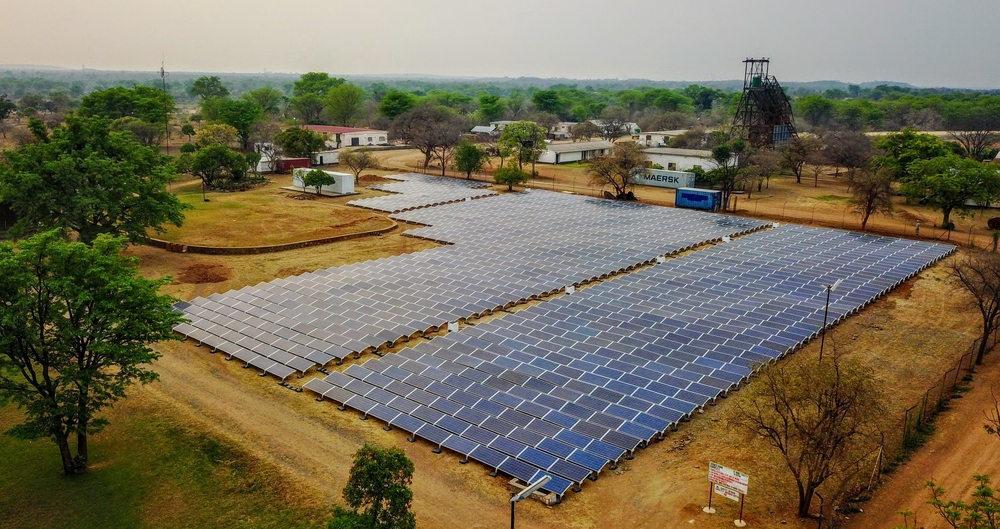 Africa Could Power a Green Revolution

With a thriving off-grid solar market and hundreds of millions of people waiting for electricity, the continent offers huge potential for renewables.
By William Minter | December 5, 2019

Just before this year’s global climate summit opened in Madrid recently, researchers announced that emissions of carbon dioxide from fossil fuels will hit a record high in 2019.

Although the 0.6 percent rate of growth is less than last year’s 2.1 percent, the total which must be cut to prevent the most catastrophic and irreversible scenarios is still increasing. Deeper and faster cuts are needed immediately and over the next 10 years. The primary responsibility to cut fossil-fuel emissions falls to developed countries that bear the greatest historical responsibilities, as well as to countries with large populations such as China and India that are also now among the top in global emissions.

However, from off-grid solar home systems to utility-scale solar and wind, the potential for major advances in the use of renewable energy is also growing rapidly on the African continent.

With stepped-up adoption of these technologies, African countries could contribute significantly to mitigating the global climate crisis. This would also reduce the ongoing damage to the health of their citizens, whether from kerosene lamps in rural areas, gasoline generators to backup unreliable power grids, or massive coal pollution in South Africa.

Driven by technological innovation, steadily falling costs, and the visible effects of the climate crisis, this transition is still hampered by vested interests in fossil fuels and by foot-dragging on the part of government planning agencies. But there is more and more evidence that renewable options are not only better for the climate and for health, but also the least expensive path. There is much untapped potential for replacing kerosene lamps, backup power generators, and coal power plants with cost-effective renewable alternatives. Innovative energy companies and investors are taking note.

East African countries have pioneered off-grid solar, laying out a model that other African countries could follow. While rural areas are still the primary markets for solar home systems, power grids in most African countries are so prone to power outages that many homes and businesses on the grid must rely on gasoline or diesel generators for backup. Solar systems can already begin to replace smaller generators, and further technological progress could make even larger systems cost-effective.

South Africa is still overwhelmingly dependent on expensive and unreliable coal-fired power plants, which supply 77 percent of the country’s electricity. Recent studies show that for new energy installations, renewable energy is already the cheapest. But such a shift faces enormous obstacles, not least the multiple dysfunctions and effective bankruptcy of Eskom, the scandal-ridden state-owned electricity agency.

Rapid expansion in solar home systems has been well documented as feasible.

In September 2019, the Global Off-Grid Lighting Association (GOGLA) reported on research in Kenya, Mozambique, Rwanda, Tanzania, and Uganda with customers of seven off-grid solar companies. Researchers tracked 1,419 customers who bought solar home systems, with interviews at 3 months and 15 months after purchase. Ninety-five percent of respondents reported significant improvement in quality of life, with 95 percent saying they would recommend their product to a friend or relative.

According to Forbes, there are 600 million people without access to electricity in Africa, 71 million of them in Nigeria. “At this point, we are barely scraping the surface” of potential demand, said Alistair Gordon, chief executive of Lumos, the largest provider of off-grid solar in Nigeria and Côte d’Ivoire. The company currently has 100,000 customers and expects to provide solar power to 100 million people in the next 5-7 years.

There is also the potential to replace backup generators, notes the International Finance Corporation.

“With rapid improvement in efficiency, performance, and economies over recent years, distributed solar and storage technologies now offer a superior and effective alternative to the backup generators that are proliferating across much of the developing world.” In Nigeria alone, an estimated 22 million small gasoline generators (excluding larger diesel generators) are reported to have a collective capacity as much as 8 times the capacity of the electric grid. They are essential to many small businesses as well as to households.

According to the Access to Energy Institute, “An effective substitute for small gasoline generators, such as solar systems, can tap into a $12 billion-a-year market in Nigeria alone.” Upfront costs are still high, but savings come from eliminating the need to buy fuel. Further research on more efficient systems, they calculate, has the potential to reduce the break-even period to 5-7 years. And while gasoline generators last approximately 5 years, solar systems have a life span of approximately 20 years.

Trapped in Coal in South Africa

The release of South Africa´s Integrated Resources Plan (IRP) in October 2019 was preceded by considerable optimism among renewable energy advocates. The government promised to “articulate the lowest-cost option for the future energy mix for South Africa, with increased contributions from renewable energy sources.” And President Ramaphosa spoke of an $11 billion green-energy initiative.

But when the IRP was announced, the plan called not only for decommissioning 10,500 MW of aging coal plants, but also for launching 1,500 MW of new coal plants. This was inconsistent with the least-cost path scenario detailed by the government Council for Scientific and Industrial Research in November 2018. And it was vigorously criticized by South African environmental justice organizations.

“There is no reasonable basis for building new coal plants when the technology and costs are clearly in favour of renewables and flexible generation,” says Makoma Lekalakala of Earthlife Africa. Coal plants built in the 2020s are likely to be abandoned long before they are paid off, the coalition of environmental groups noted.

The South African Parliament has approved a $4 billion bailout for Eskom’s debt, much of it due to cost overruns of $20 billion on the giant Medupi and Kusile coal plants.

And a devastating report by an outside corporate consulting firm concluded that Eskom has become ”an operationally dysfunctional, financially insolvent, unreliable, and corrupt entity,” arguing that urgent attention to fixing these basic problems must take priority over renewable energy. Renewable energy advocates agree that implementation of any plans, including integration of renewables into the grid, requires fundamental reform in Eskom’s management. But, they say, doubling down on coal will worsen rather than improve the situation.

Unless South Africa’s policies change, therefore, the potential for advance in renewable energy is likely to be realized more rapidly by hundreds of thousands of off-grid consumers around the continent than by entrenched power companies such as South Africa’s Eskom.

William Minter is the editor of AfricaFocus Bulletin.