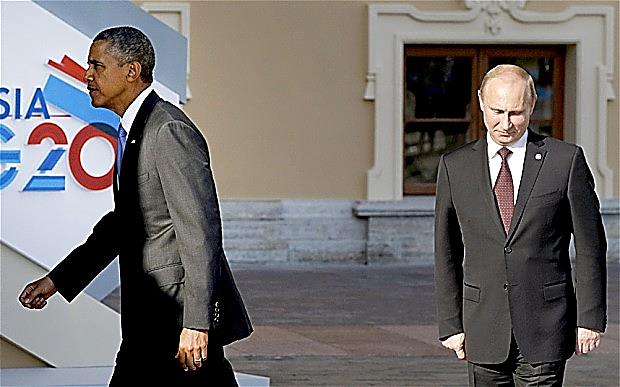 An African-American Perspective on U.S. Exceptionalism*

We did not need Russian President Vladimir Putin to remind us of the fiction that America’s commitment to values and social practices makes it exceptional in the community of nations.
By Ajamu Baraka | September 19, 2013

In his recent op-ed in the New York Times, Vladimir Putin raised hackles among the talking-heads across the U.S. when he questioned the wisdom of President Obama’s evocation of the narcissistic idea of “American exceptionalism.” After all, the exceptionalism of the U.S. has never been a subject for reasoned discussion or debate in the media or elsewhere. Everyone knows that the U.S. is the greatest nation in the world and, therefore, has special privileges and responsibilities! Those privileges and responsibilities include not bothering with international law or processes when the government decides that the “world” (meaning itself and a few European nations and a couple of their client states) will take responsibility to enforce global order according to its own interpretations, values and needs.

The fact that many in the U.S. believe that those views, values and needs are neutral, impartial representations of the global community is on full display every night on the cable news channels where the state propagandists posing as journalists and the coterie of paid ex-military and U.S. intelligence consultants make impassioned arguments in favor of the U.S. waging war on Syria as a “punishment” for its alleged use of chemical weapons.

But for many of us the story of American exceptionalism is an alien story, a children’s fairy tale spun from the fertile imagination of story tellers where in their story indigenous people were side-kicks to lone rangers, the African slave-trade was an unfortunate aberration that was corrected by Lincoln, children did not work in factories, women were not slaves to men, socialist and communists were not harassed and jailed, U.S. citizens of Japanese descent were not placed in concentration camps and Dr. King would have approved of Barack Obama’s warmongering.

Yet it is precisely this childlike story of American that informs the thinking and world-view of President Obama when he declares that for “for nearly seven decades, the United States has been the anchor of global security” and the indispensable nation. However, the lived reality of many African Americans, specifically the poor and working class, tell a tale of the America experience quite different from Barack Obama’s American story.

In our communities where we are experiencing depression-level economic conditions, our sons being murdered by agents of the state at a rate of one every 28 hours, our children locked away for life without the possibility of parole and more than a million of our sons and daughters entombed in the dungeons of this nation’s prisons, we did not need Vladimir Putin to remind us of the fiction of “America’s” commitment to values and social practices that make it “exceptional” in the community of nations. That reminder was also not necessary for our indigenous brothers and sisters who still struggle for sovereignty, dignity and self-determination in the aftermath of their American holocaust and America’s God-given manifest destiny.

Because for those of us who have been invaded, enslaved, murdered, subjected to systematic racist dehumanization and colonized, we don’t harbor any illusions about America and its real intentions when it professes humanitarian concerns. Through our own painful experiences, we know and understand that the ideological foundation of U.S. exceptionalism and the equally odious notion of “humanitarian intervention” is white supremacy. We can name that in a way that Putin couldn’t because he does not stand outside of the white supremacist framework.

Those of us who operate outside of that oppressive and distorting world-view can clearly see the assumptions of Euro-American racial and cultural superiority hidden in the discourse of the “responsibility to protect.” And we are not surprised that others are unable to see the same because the assumptions of white privilege and prerogatives are so normalized and deeply inculcated in the collective consciousness of Americans of all races, nationalities, gender and class that the cultural and institutional processes and expressions of white supremacy have been rendered largely invisible.

That is why so many Americans and growing numbers of “people of color” continue to believe that the U.S. government has the right to contravene international law in order to uphold international law, to kill at will, to decide what nation has the right to sovereignty and to determine that the value of lives of human beings in Syria are worth more than the lives of the more than 2,000 murdered by the Egyptian military, or the 1,400 Palestinians murdered by the government of Israel a couple of years ago. And that is why it is absolutely critical that we relegate the dangerous myth of American exceptionalism to the ash-heap of history.

What is needed in the U.S. today is more humility and what Dr. King called a “revolution of values” that moves us away from the insane war mongering being pushed by President Obama and the elites in the U.S.

If we are able to achieve the goal of forcing the elites to respect the voice of the people who have rejected this latest move toward war and redirect U.S. policies toward peace, real global cooperation and solving the pressing problems of poverty, systemic oppression, violence and cultural deterioration in the U.S. that would be a truly exceptional development.

*An excerpt from a longer article titled “The only thing exceptional about the U.S. is its moral hypocrisy: An African American Perspective on U.S. Exceptionalism.”

Ajamu Baraka was the founding Director of the US Human Rights Network. Baraka is currently an Associate Fellow at the Institute for Policy Studies and is editing a new book on human rights in the U.S. entitled “The Struggle for a People-Centered Human Rights: Voices from the Field.” He can be reached at AjamuBaraka.com.