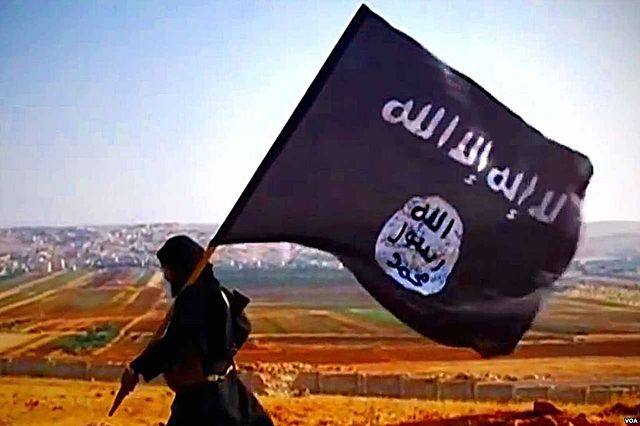 The flag of jihad provides cover for a multitude of sins. (Photo: Wikimedia Commons)

After the Paris Attacks, What Happens Here?

In the wake of the Paris attacks, Americans can’t let the hawks stampede us back into panic and illusions that US military supremacy can remake the world.
By Leon Wofsy | November 18, 2015

ISIL’s crusade is reaching out to inflict the horrors of war on civilian populations wherever possible. It has to be defeated — in the Middle East and anywhere it tries to strike.

That can only happen if there is a major shift in policies that contributed much to the horrendous chaos that opened up Iraq and Syria to ISIL. But as we have seen before, acts of terrorism can be exploited to fuel fear, nativist hatreds, and a clamor to unleash US military might. That is exactly what we’re getting from the GOP presidential aspirants. The Democratic candidates have said little so far. Bernie Sanders properly points out he’s “no fan of  ‘regime change’” and cites his vote against the disastrous Iraq war. Hillary Clinton hasn’t said much beyond asserting her toughness.

Obama and Kerry seem to be considering a shift away from stubborn policies that have failed. Obama’s press conference after the G20 Summit in Turkey is essential reading. With patience and clarity, he repeatedly counters the gang-up of hawkish reporters. There’s a departure from the long-standing ultimatum that Assad must go before any negotiated effort to end the Syrian civil war; he pulls back from the refusal to have anything to do with Russia and Iran in negotiations concerning the Syrian tragedy or the fight against ISIL. Obama insists that there must not be a return to a US invasion and war that misfired in Iraq with such devastating consequences. He suggests the need for collective strategies involving the UN, recognizing the primacy of the people and nations of the Middle East both on the relatively short-run challenges and the long-range progress of the region.

Culling the positives out of Obama’s press conference and summarizing them here may make the outlook seem brighter than it is. There are enormous obstacles, some of them based on the reality of extensive US military intervention and imperial interests that continue to drive our foreign policy. For that matter, competing economic interests and power rivalries characterize all the “players” in the drama. Progress and peace require a degree of cooperation among nations that have selfishly wrought havoc in the Middle East since the First World War. Even harder, it requires encouragement and faith that the people of the Middle East can overcome the legacy of imperialism, tyranny and religious fanaticism. That outlook flickered briefly, but brilliantly, in the Arab Spring.

My focus is on the extreme importance of what happens in the United States in the wake of the ISIL assaults in Paris and the likelihood of more to come. Obama’s apparent opening toward a new approach deserves support. Its model is the recently negotiated P+1 agreement with Iran. This situation is more difficult because it requires not only a collaborative agreement to end the Syrian war, but developing a common strategy to defeat ISIL. Beyond that, any degree of success depends on serious efforts to cope with the appalling human misery overwhelming millions throughout the Middle East.

Americans can’t let the hawks stampede us back into panic and illusions that US military supremacy can remake the world. Obama’s effort to change course (at least to some degree) is still fragile, far from an accomplished fact. It demands support from the majority of Americans who have had enough of endless wars. We should insist that the Democratic candidates support inclusive diplomacy and the United Nations. Hillary might benefit from reading Obama’s press conference comment on  “no fly zones”, a proposal with which she continues to curry favor among the neocons.

There is a nightmare, I must admit, that haunts me. It is that Obama’s tentative move away from a divisive, war-oriented foreign policy gets aborted. An America headed by Cruz or Rubio or Fiorina (or even by a Democrat who doesn’t commit to a new vision in foreign policy) would be inviting again the worst catastrophes of the 20th century. The nightmare gets worse if Netanyahu is our closest ally.

But, in today’s very complicated and dangerous world, I like a lot of what Obama had to say in his Ankara press conference. I believe it reflects the better judgment of the majority of Americans. If we organize and speak out, the nightmare may fade.