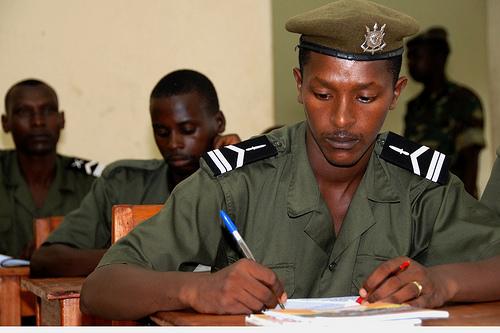 After the World Cup bombing by the militant group al-Shabaab, it's time for a strong regional response to the crisis in Somalia.
By Francis Njubi Nesbitt | July 26, 2010 The international terrorist attack on Kampala, Uganda, by Somalia’s al-Shabaab militants is clearly a wakeup call for the U.S. and its allies in the Eastern Africa region. The militants claimed responsibility for bombs planted in two Kampala venues showing the World Cup final on July 11. The attack killed over 76 people.

Al-Shabaab claimed that the bombings were in retaliation for the deployment of Ugandan troops in the African Union’s peacekeeping mission in Somalia (AMISOM). The peacekeeping troops are preventing al-Shabaab from deposing the U.S.-backed government in Mogadishu. On July 4, the group’s spiritual leader, Sheikh Abu Zubayr, warned Uganda and Burundi that they would pay for providing troops to the peacekeeping force. Both Zubayr and al-Shabaab spokesman Ali Mahmoud Rahge warned other countries contemplating sending troops that they would suffer the same fate.

President Yoweri Museveni of Uganda vowed revenge. “They have invited us to deal with them and we shall deal with them,” he told journalists last week. “We will go for them and we will get them.” Museveni reiterated his support for the peacekeeping mission in Somalia. He promised to increase the peacekeeping force and expand its mandate to allow offensive action against the militants.

Likewise, the regional security organization the Intergovernmental Authority on Development (IGAD) condemned the attack and vowed to increase troops in Somalia from 6,000 to 8,000 next month. The group — made up of Ethiopia, Kenya, Uganda, Sudan, Somalia, and Djibouti — argues, however, that 20,000 African and UN troops are needed to stabilize Somalia. Kenya also warned that the terrorists would not deter it from participating in the peacekeeping mission. Foreign Minister Moses Wetangula, however, ruled out unilateral military intervention to root out the insurgents. The minister accused the international community of failing to deliver the funds pledged to help stabilize Somalia. “Somalia hasn’t gotten the attention it deserves from the international community,” he said. A week before the bombing, Wetangula warned that the United States had not done enough to recognize and deal with the threat posed by al-Shabaab in the East African region.

The Kenyan minister warned that over 200 foreign fighters had arrived in Somalia from the Arabian Peninsula and Afghanistan over the last two years. Their influence is evident in the latest attack, which deliberately targeted venues frequented by expatriates. The successful attack shows that there has been a transfer of terrorism techniques from Pakistan, Iraq, and Afghanistan. This transfer of terrorist technology also demonstrates the influence of foreign fighters in the growing regional conflict.

The attack also signals a shift in the philosophy and agenda of al-Shabaab. The foreign fighters from the United States and Europe are interested in internationalizing the conflict to target expatriates in neighboring countries. Their first priority is attacking Europeans and Americans, not fighting local battles over political control in Mogadishu. The agenda is based on their radicalization outside Somalia. The international jihadi community is much more impressed with those that can kill Europeans and Americans. As President Obama pointed out, Somalis, Ugandans, and Kenyans are collateral damage. Some of these jihadis are of Somali descent, but no longer speak the language or understand the culture. They’re motivated, instead, by hatred of the United States and what they see as its anti-Muslim policies both at home and abroad.

This radicalization in the United States became clear in 2009, when the FBI announced that 20 Somali-American youth had left Minnesota to join al-Shabaab in Somalia. These young men were particularly incensed by Ethiopia’s invasion of Somalia in 2006. The Ethiopians deposed the Islamic Courts Union government and proceeded to install a surrogate state. Many Somalis in the diaspora felt an obligation to contribute to the struggle in Somalia monetarily if possible, but with their lives if necessary. They were also angered by the growing discrimination against Muslims and Somalis in the United States. Since 2001, the FBI has questioned thousands of Somali men, the authorities have jailed hundreds on minor immigration charges, and Washington has deported hundreds more back to Somalia. These experiences, combined with U.S. support for Ethiopia’s invasion of Somalia, led some to join al-Shabaab.

The July 11 attack in Uganda shows that the internationalists have won some support for their cause among the leaders of al-Shabaab. The group has regularly warned neighbors that it has the capacity to strike soft targets like restaurants with suicide bombers. They have already deployed suicide bombers, roadside bombs, and IEDs within Somalia. With this latest attack, they have now demonstrated that they can export their dastardly deeds deep into Eastern Africa. With a large disaffected Somali diaspora in the region, Europe, and the United States, it’s only a matter of time before other countries are targeted.

U.S and EU policies in the region have been counterproductive, and have failed to prevent this internationalization of Somalia’s terrorists. These policies included the disastrous U.S. intervention of 1992, followed by an ignominious withdrawal in 1994; the equally ineffective Ethiopian invasion of 2006; and the current U.S. and EU support for the weak transitional federal government in Mogadishu. Each of these interventions has escalated the conflict and further radicalized the Somali population. Al-Shabaab itself emerged in the context of the occupation of Somalia by Ethiopia, a close ally of the United States. The Ethiopians helped install a shaky U.S.-backed government, but withdrew their troops in late 2008. They were replaced by the African Union’s peacekeeping force in Somalia (AMISOM). The new government’s survival is completely dependant on foreign support and a small contingent of about 6,000 AMISOM troops from Uganda and Burundi.

Like other stakeholders in the region, including Kenya and IGAD, Museveni argued that the international community should mobilize and fund the 20,000 African and U.N. troops needed to stabilize Somalia. Officials in the region have repeatedly argued that Somalia hasn’t received the attention it deserves. The regional consensus seems to be that funding and delivering 20,000 troops can stabilize the country. Museveni’s suggestion that AMISOM be allowed to take offensive action against al-Shabaab should also be taken seriously. Museveni argued that 20,000 troops were enough to remove the insurgents from the major towns, ports, and airports and push them back into the countryside. The Somali troops under training would then be deployed to maintain long-term security.

This current intervention must be careful not to repeat the mistakes of the Ethiopian invasion of 2006. The Ethiopian troops successfully deposed the nascent Islamic Courts Union government but withdrew before containing the subsequent insurgency by al-Shabaab and other groups. The key difference is that the Ethiopians invaded to depose a popular sitting government while AMISOM was invited by the current government in Mogadishu. The Somalis also consider the Ethiopian state a traditional enemy at home, in Ethiopia, and abroad.

AMISOM can avoid stirring up negative Somali nationalism by involving regional players such as Puntland, Somaliland, and the large Somali diaspora in East Africa, Europe, and the United States. Reaching out to the larger Somali diaspora and involving them in the process (particularly diplomatic and developmental) would deny the insurgents a significant source of revenue and credibility. The diaspora recognizes that attacks on surrounding countries will only delay any prospects for peace. They also know that the agenda of the foreign fighters is not their agenda. At the same time, the small minority of local and foreign jihadis not interested in negotiation must be contained.

In the final analysis, however, there is no military solution to the endemic violence in Somalia. The secret is proper sequencing of military, diplomatic, and development initiatives. A perfect example is Sierra Leone beginning in 2002, when an effective international peacekeeping/peace-enforcement force was able to stabilize the country before supervising widely acclaimed democratic elections. Although its situation was as bad as Somalia, if not worse, Sierra Leone is currently well on the way to consolidating its democracy.

On the political front, the international community should support an adaptation of indigenous conflict resolution mechanisms to fit current circumstances. There is ample precedence in Somaliland, a region in the northwest that broke away from the former Somalia in 1991. Somaliland used a hybrid political system that brought together traditional clan leaders and elected officials in a bicameral parliament. The system is based on traditional legal codes enforced by a council of elders. This system has made Somaliland the most stable region in the former Somalia. The Somaliland model of local hybrid solutions, based on an indigenous model of conflict resolution that emphasizes community involvement, can be modified and reproduced across the other regions.