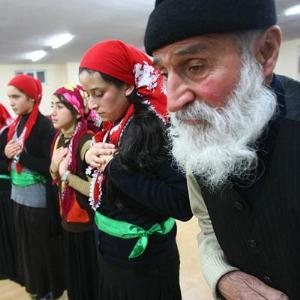 A new group of opposition Alawites is complicating the increasingly sectarian character of Syria's civil war.
By Daniel DePetris | October 24, 2012

The otherwise bloody revolt taking place in Syria experienced an unexpected positive development when a new group of anti-regime activists was formed in early October. Unlike the dozens of rebel brigades proliferating across the country, the new organization is trying to resurrect the nonviolent tactics that the Syrian opposition used during the first few months of the rebellion last year, when demonstrations and calls for civic activism filled the squares of towns across Syria.

But more important is who formed the group: Syrian Alawites.

When the protests against President Bashar al-Assad’s regime began in March 2011, virtually every ethnic and sectarian sect in Syria participated. Sunni, Shia, and Christian families alike all complained about their country’s poor human rights record and their bleak economic prospects, all the while lambasting Assad for promises of political reform that were broken. But a year and a half later, what was once an anti-Assad opposition movement that used words as weapons is now a full-fledged armed insurgency. Some of Syria’s most historically rich cities are being burned to the ground in active combat, while a capital that was once a quiet tourist destination is now an open warzone.

The composition of the anti-Assad rebellion has changed as well. The vast majority of the rebel brigades targeting the Syrian army and security forces are Sunni Muslims. The most powerful of the battalions, such as the Farouq Brigades, originally sprung up in areas of the country that are predominately Sunni—and which have been leveled by the Syrian army and air force. U.S., European, and Arab intelligence officials are increasingly concerned that Sunni extremists and jihadists affiliated with the al-Qaeda brand are forming their own groups or influencing the direction of others. The Syrian army’s active suppression of cities such as Homs, Deir el-Zor, Dara’a, and now Aleppo has drawn the anger and resentment of millions of Sunni Muslims against a regime that is formed around a core of Alawites loyal to the Assad family.

Yet this is precisely why the formation of the “Free Alawites” is so significant. Although there are plenty of Alawites who oppose Bashar al-Assad’s repression of the opposition, there is a popular perception that the entire Alawite community is actively supporting the ruling system and actively aiding in Assad’s security crackdown. The fact that not a single major Alawite official or military officer has deserted Assad adds to the misconception.

Assad himself is more than willing to do his part to keep the belief alive; there are a number of reports in the media speculating that the Syrian army is beginning to hand out weapons to Alawite villages in the hopes that they will do the government’s work. All of this has generated an enormous amount of consternation from Syria’s Sunnis, some of whom have threatened to take revenge on the Alawite community once Assad is removed from power.

The establishment of the “Free Alawites”—and their message to others in the community to “rise in unity against (Assad’s) corrupt family”—is a welcome break from what many now consider a Sunni-Alawite civil war.

Of course, just because a small collection of Alawites is making its opposition to Assad known does not mean that Syria’s 2 million Alawites will defect to the opposition entirely. Some Alawites may not like Assad, but they are equally opposed to a disorganized and fractious Free Syrian Army that at times kills civilians, executes Syrian soldiers, and frames the struggle in purely sectarian terms.

The bad blood will not dissipate immediately, but the establishment of the “Free Alawites” is nonetheless a ray of hope for some in the opposition who have assumed that the entire Alawite sect is with Assad to the very end. It is also a demonstration that the nature of the revolt in Syria today is not strictly black and white, but rather more nuanced and complicated than some have believed.

Daniel DePetrisDaniel R. DePetris is an independent researcher and a contributor to FPIF.