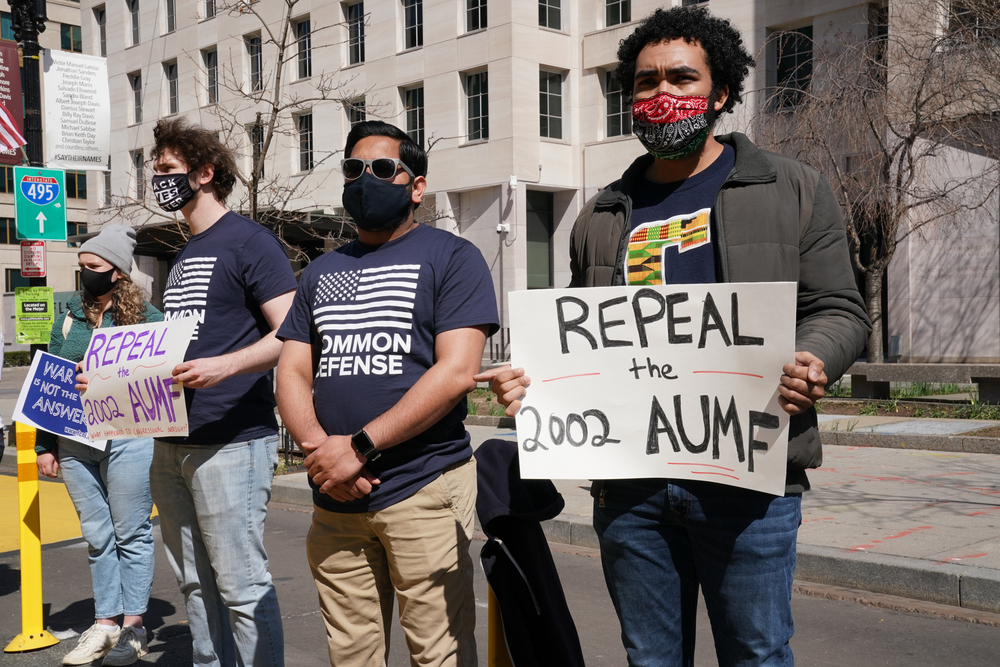 Demonstrators in Washington, D.C. call on the Biden administration to repeal the Authorization for Use of Military Force to stop the war in Iraq. (Shutterstock)

America’s Afghan War Is Ending. What About Iraq — and Iran?

Even as Biden sticks to the Afghanistan withdrawal, he's launching strikes in Iraq and delaying a return to the Iran deal.
By Medea Benjamin, Nicolas J.S. Davies | July 14, 2021

At Bagram air base, Afghan scrap merchants are already picking through the graveyard of U.S. military equipment that was, until recently, the headquarters of America’s 20-year occupation of their country. Afghan officials say the last U.S. forces slipped away from Bagram in the dead of night, without notice or coordination.

The Taliban are rapidly expanding their control over hundreds of districts, usually through negotiations between local elders, but also by force when troops loyal to the Kabul government refuse to give up their outposts and weapons.

A few weeks ago, the Taliban controlled a quarter of the country. Now it’s a third. They are taking control of border posts and large swathes of territory in the north of the country. These include areas that were once strongholds of the Northern Alliance, a militia that prevented the Taliban from unifying the country under their rule in the late 1990s.

People of good will all over the world hope for a peaceful future for the people of Afghanistan, but the only legitimate role the United States can play there now is to pay reparations, in whatever form, for the damage it has done and the pain and deaths it has caused. Speculation in the U.S. political class and corporate media that the U.S. can keep bombing and killing Afghans from “over the horizon” should cease.

The U.S. and its corrupt puppet government lost this war. Now it’s up to the Afghans to forge their future.

So what about America’s other endless crime scene, Iraq? 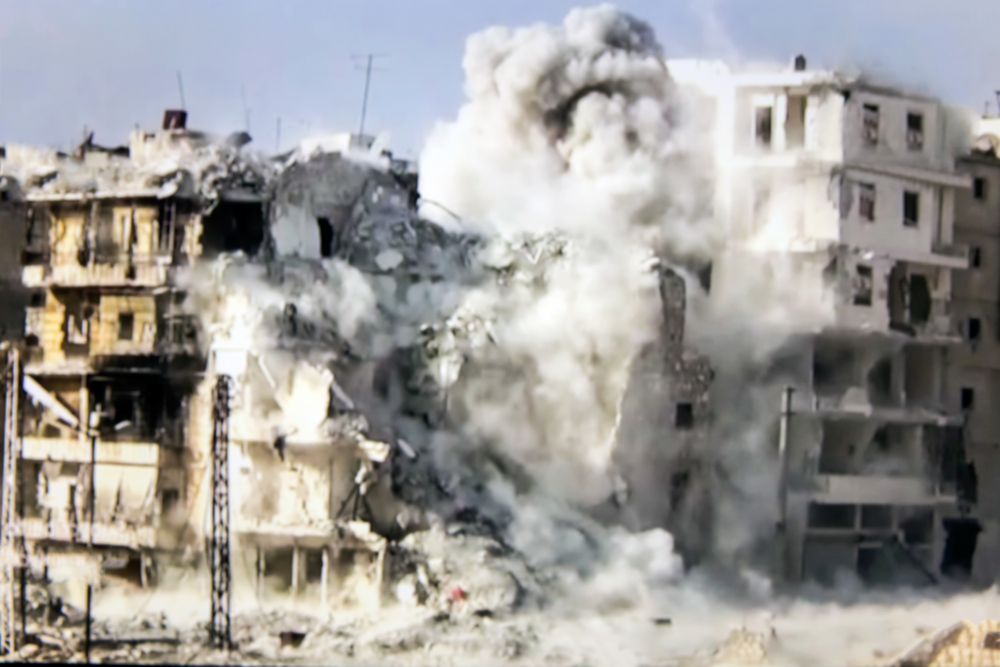 The U.S. corporate media only mention Iraq when our leaders suddenly decide that the over 150,000 bombs and missiles they have dropped on Iraq and Syria since 2001 were not enough — and reason that dropping a few more on Iranian allies there will appease some hawks in Washington without starting a full-scale war with Iran.

But for 40 million Iraqis, as for 40 million Afghans, America’s most stupidly chosen battlefield is their country, not just an occasional news story. They are living their entire lives under the enduring impacts of the neocons’ war of mass destruction.

Young Iraqis took to the streets in 2019 to protest 16 years of corrupt government by the former exiles to whom the United States handed over their country and its oil revenues.

The 2019 protests were directed at the Iraqi government’s corruption and failure to provide jobs and basic services to its people, but also at the underlying, self-serving foreign influences of the United States and Iran over every Iraqi government since the 2003 invasion.

A new government was formed in May 2020, headed by British-Iraqi Prime Minister Mustafa al-Kadhimi, previously the head of Iraq’s Intelligence Service and, before that, a journalist and editor for the U.S.-based Al-Monitor Arab news website.

Despite his Western background, al-Kadhimi has initiated investigations into the embezzlement of $150 billion in Iraqi oil revenues by officials of previous governments, who were mostly former Western-based exiles like himself. And he is walking a fine line to try to save his country, after all it has been through, from becoming the front line in a new U.S. war on Iran.

Recent U.S. airstrikes have targeted Iraqi security forces called Popular Mobilization Forces (PMF), which were formed in 2014 to fight the Islamic State (IS), the twisted religious force spawned by the U.S. decision, only 10 years after 9/11, to unleash and arm al-Qaeda in a Western proxy war against Syria.

The PMFs now comprise about 130,000 troops in 40 or more different units. Most were recruited by pro-Iranian Iraqi political parties and groups, but they are an integral part of Iraq’s armed forces and are credited with playing a critical role in the war against IS.

Western media represent the PMFs as militias that Iran can turn on and off as a weapon against the United States, but these units have their own interests and decision-making structures. When Iran has tried to calm tensions with the United States, it has not always been able to control the PMFs. General Haider al-Afghani, the Iranian Revolutionary Guard officer in charge of coordinating with the PMF, recently requested a transfer out of Iraq, complaining that the PMFs are paying no attention to him.

Ever since the U.S. assassination of Iranian General Qassem Soleimani and PMF commander Abu Mahdi al-Muhandis in January 2020, the PMFs have been determined to force the last remaining U.S. occupation forces out of Iraq. After the assassination, the Iraqi National Assembly passed a resolution calling for U.S. forces to leave Iraq. Following U.S. airstrikes against PMF units in February, Iraq and the United States agreed in early April that U.S. combat troops would leave soon.

No Iraq Withdrawal in Sight 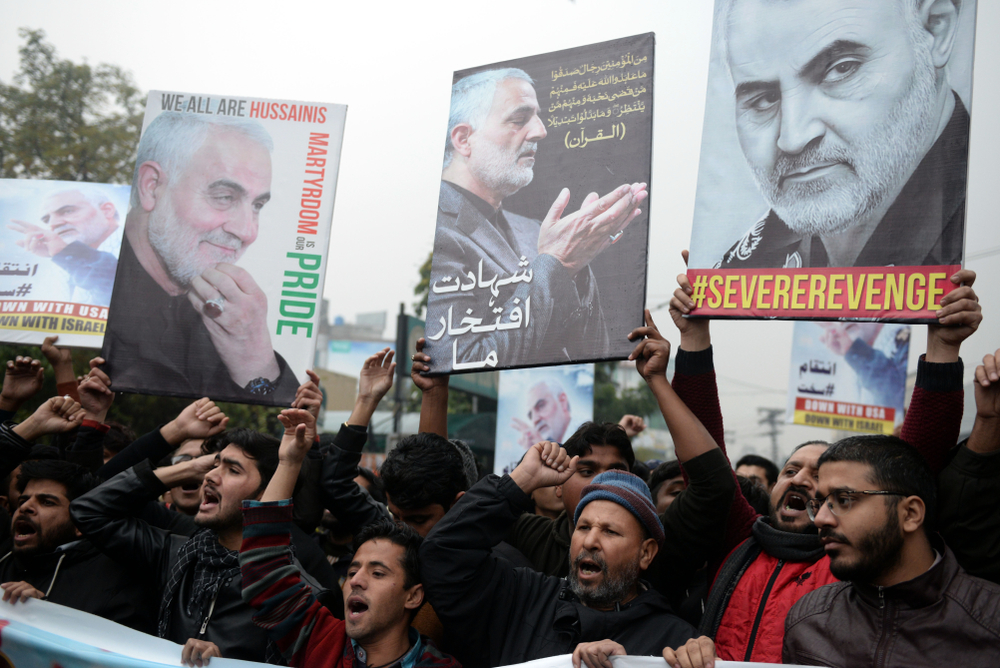 But no date has been set and no detailed agreement has been signed. Many Iraqis do not believe U.S. forces will leave, nor do they trust the Kadhimi government to ensure their departure. As time has gone by without a formal agreement, some PMF forces have resisted calls for calm from their own government and Iran, and stepped up attacks on U.S. forces.

At the same time, the Vienna talks over the JCPOA nuclear agreement have raised fears among PMF commanders that Iran may sacrifice them as a bargaining chip in a renegotiated nuclear agreement with the United States.

So, in the interest of survival, PMF commanders have become more independent of Iran, and have cultivated a closer relationship with Prime Minister Kadhimi. This was evidenced in Kadhimi’s attendance at a huge military parade in June 2021 to celebrate the seventh anniversary of the PMF’s founding.

The very next day, the U.S. bombed PMF forces in Iraq and Syria, drawing public condemnation from Kadhimi and his cabinet as a violation of Iraqi sovereignty. After conducting retaliatory strikes, the PMF declared a new ceasefire on June 29th, apparently to give Kadhimi more time to finalize a withdrawal agreement. But six days later, some of them resumed rocket and drone attacks on U.S. targets.

Whereas Trump only retaliated when rocket attacks in Iraq killed Americans, a senior U.S. official has revealed that Biden has lowered the bar, threatening to respond with airstrikes even when Iraqi militia attacks don’t cause U.S. casualties.

But U.S. air strikes have only led to rising tensions and further escalations by Iraqi militia forces. If U.S. forces respond with more or heavier airstrikes, the PMF and Iran’s allies throughout the region can respond with more widespread attacks on U.S. bases. The further this escalates and the longer it takes to negotiate a genuine withdrawal agreement, the more pressure Kadhimi will get from the PMF, and other sectors of Iraqi society, to show U.S. forces the door.

The U.S. Troop Presence in Iraq and the Iran Deal 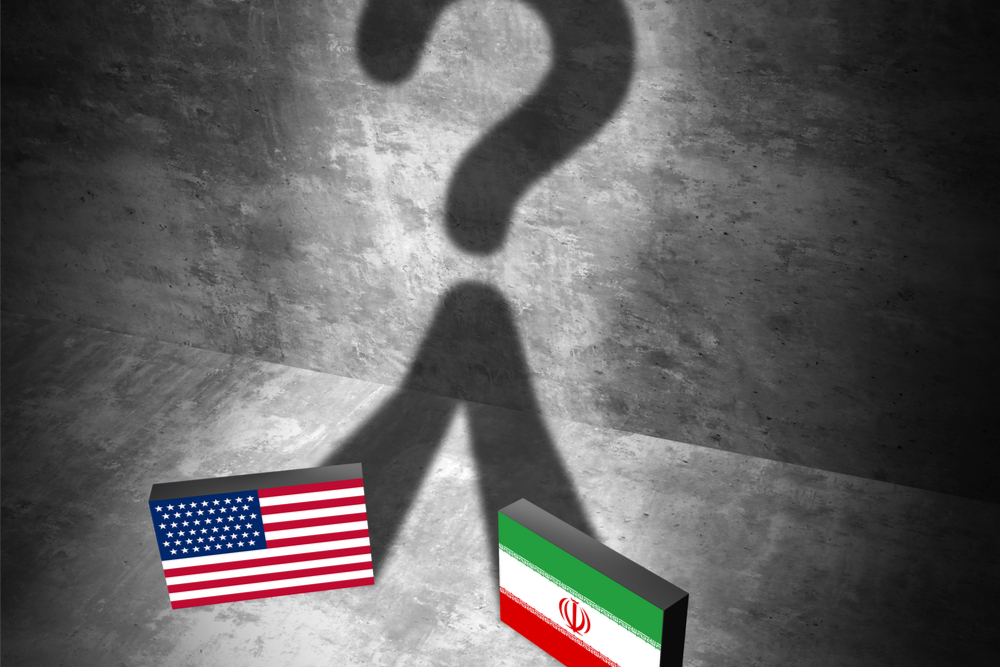 The official rationale for the U.S. presence, as well as that of NATO training forces in Iraqi Kurdistan, is that the Islamic State is still active. A suicide bomber killed 32 people in Baghdad in January, and IS still has a strong appeal to oppressed young people across the region and the Muslim world. The failures, corruption and repression of successive post-2003 governments in Iraq have provided fertile soil.

But the United States clearly has another reason for keeping forces in Iraq: as a forward base in its simmering war on Iran. That is exactly what Kadhimi is trying to avoid by replacing U.S. forces with the Danish-led NATO training mission in Iraqi Kurdistan. This mission is being expanded from 500 to at least 4,000 forces, made up of Danish, British, and Turkish troops.

If Biden had quickly rejoined the JCPOA nuclear agreement with Iran on taking office, tensions would be lower by now, and the U.S. troops in Iraq might well be home already. Instead, Biden obliviously swallowed the poison pill of Trump’s Iran policy by using “maximum pressure” as a form of “leverage,” escalating an endless game of chicken the United States cannot win — a tactic that Obama began to wind down six years ago by signing the JCPOA.

The U.S. withdrawal from Iraq and the JCPOA are interconnected, two essential parts of a policy to improve U.S.-Iranian relations and end the U.S.’s antagonistic and destabilizing interventionist role in the Middle East. The third element for a more stable and peaceful region is the diplomatic engagement between Iran and Saudi Arabia, in which Kadhimi’s Iraq is playing a critical role as the principal mediator.

The fate of the Iran nuclear deal is still uncertain. The sixth round of shuttle diplomacy in Vienna ended on June 20th, and no date has been set for a seventh round yet. President Biden’s commitment to rejoining the agreement seems shakier than ever, and President-elect Raisi of Iran has declared he will not let the Americans keep drawing out the negotiations.

In an interview on June 25th, U.S. Secretary of State Blinken upped the ante by threatening to pull out of the talks altogether. He said that if Iran continued to spin more sophisticated centrifuges at higher and higher levels, it will become very difficult for the United States to return to the original deal. Asked whether or when the United States might walk away from negotiations, he said, “I can’t put a date on it, (but) it’s getting closer.”

What should really be “getting closer” is the U.S. withdrawal of troops from Iraq. While Afghanistan is portrayed as the “longest war” the United States has fought, the U.S. military has been bombing Iraq for 26 of the last 30 years. The fact that the U.S. military is still conducting “defensive airstrikes” 18 years after the 2003 invasion and nearly 10 years since the official end of the war, proves just how ineffective and disastrous this U.S. military intervention has been. 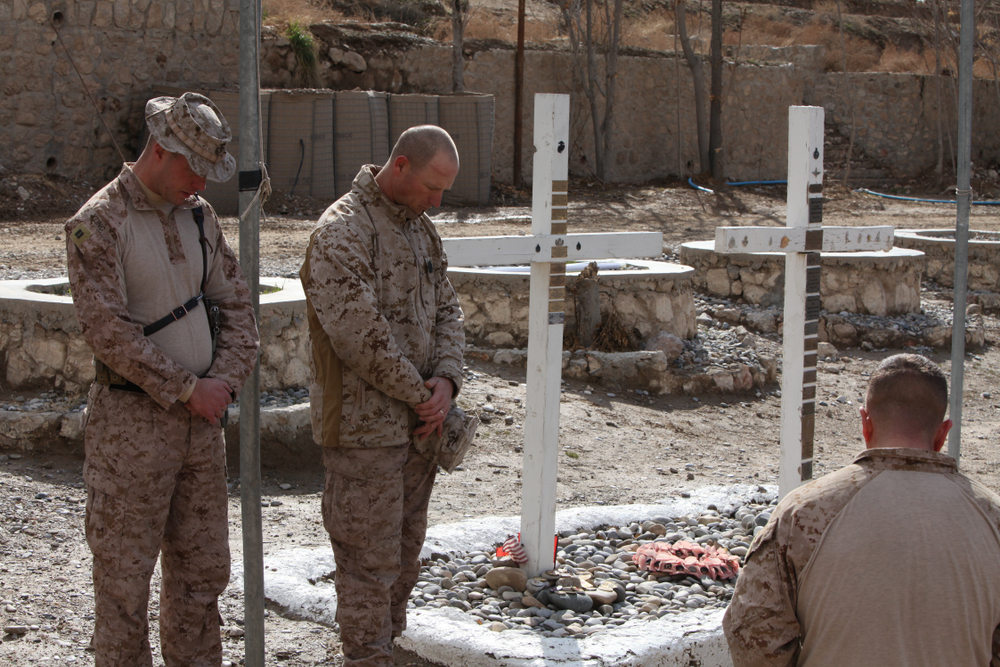 Biden certainly seems to have learned the lesson in Afghanistan that the U.S. can neither bomb its way to peace nor install U.S. puppet governments at will. When pilloried by the press about the Taliban gaining control as U.S. troops withdraw, Biden answered:

“For those who have argued that we should stay just six more months or just one more year, I ask them to consider the lessons of recent history… Nearly 20 years of experience has shown us, and  the current security situation only confirms, that ‘just one more year’ of fighting in Afghanistan is not a solution but a recipe for being there indefinitely. It’s the right and the responsibility of the Afghan people alone to decide their future and how they want to run their country.”

The same lessons of history apply to Iraq. The U.S. has already inflicted so much death and misery on the Iraqi people, destroyed so many of its beautiful cities, and unleashed so much sectarian violence and IS fanaticism. Just like the shuttering of the massive Bagram base in Afghanistan, Biden should dismantle the remaining imperial bases in Iraq and bring the troops home.

The Iraqi people have the same right to decide their own future as the people of Afghanistan, and all the countries of the Middle East have the right and the responsibility to live in peace, without the threat of American bombs and missiles always hanging over their and their children’s heads.

Let’s hope Biden has learned another history lesson: that the United States should stop invading and attacking other countries.