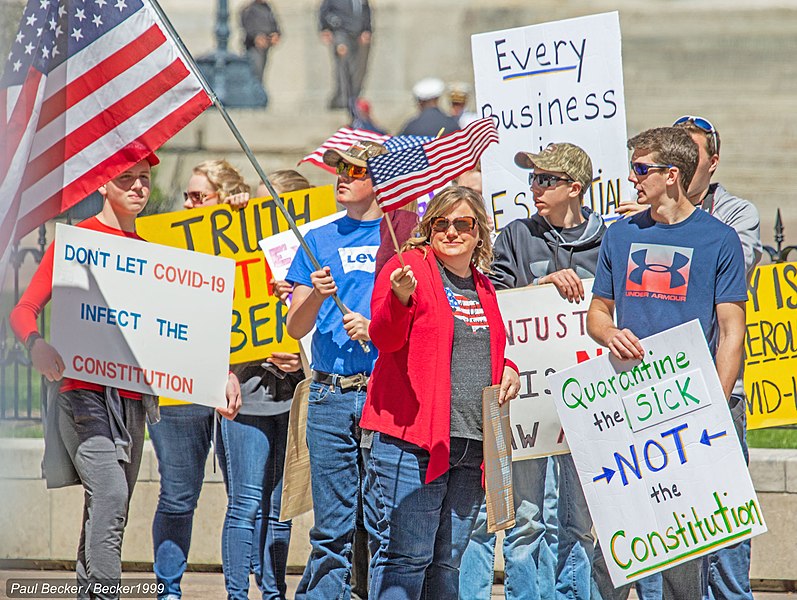 Too many Americans belong to the cult of selfish individualism. In the COVID era, this has become a death cult.
By John Feffer | August 3, 2020

On a per capita basis, Belgium has been the European country hardest hit by the coronavirus. With a population of 11.5 million, it registered over 66,000 infections and nearly 10,000 deaths. In fact, Belgium’s level of mortality of 860 deaths per million inhabitants is the highest in the world.

Belgium suppressed the first wave of the coronavirus by imposing a strict lockdown. By the beginning of the summer, it had radically reduced its infection rate. It restarted its economy. It reopened its borders to tourists in the middle of June.

In July, however, the infection rate began to rise again, with a pocket of new infections around the city of Antwerp. New cases began to reach several hundred a day.

The Belgian government swiftly instituted new restrictions on the number of people who could gather in public spaces and for private events like weddings. It limited the number of contacts for each household to the same five people for the next four weeks. It made the use of face masks mandatory in crowded public spaces.

In this way, the government wants to avoid another lockdown. “However, the most important approach is the individual one,” Belgian Prime Minister Sophie Wilmes has said. “If we cannot contain the coronavirus, it will be a collective failure.” In other words, the Belgian government knows that it can institute as many restrictions as it wants, but they won’t be effective unless individual Belgians comply with the rules.

The U.S. population is about 30 times larger than Belgium’s. During its recent surge of infections, Belgium experienced an average increase of 279 new cases per day. If the United States were to experience a comparable rise, that would translate to 8,370 new cases per day.

In reality, since the middle of July, the United States has been hit by an average of more than 60,000 new cases per day, which is already seven times the size of the crisis that Belgium is experiencing.

But instead of introducing new restrictions, as Belgium has done, President Donald Trump has been insisting on the opposite. He has urged states to reopen their economies. He is insisting that students return to school. Until very recently, he refused even to wear a face mask.

On July 21, Donald Trump declared that his administration was “in the process of developing a strategy” to address the coronavirus. Frankly, it’s criminal that he didn’t develop such a strategy half a year ago.

The federal government has proven to be incapable of coordinating an effective response to the pandemic. Even six months into this crisis, the United States does not have a fully functioning testing and contact tracing system. According to the Centers for Disease Control, the actual infection numbers might be as much as 10 times higher in certain parts of the country. As it is, the pandemic is currently overwhelming the southern tier of the country, from Florida to Louisiana and from Texas to California.

The problem is not just Donald Trump, though he bears a lion’s share of the responsibility. And it’s not just the members of his Republican party who serve in Congress and as governors of some of the hardest-hit states who are at fault.

The problem also lies with Americans.

Even though the United States is the epicenter of the current pandemic, many Americans remain coronavirus skeptics. One in three, according to a July poll from Axios-Ipsos, believe that statistics on COVID deaths have been exaggerated. Large numbers of Americans refuse to wear masks in public. These refuseniks go to bars, congregate at public beaches, and even hold big house parties, like the one that police recently broke up in New Jersey that attracted 700 people. If their state doesn’t allow them to eat inside a restaurant or get a haircut, then they’ll drive long distances to a state that does.

Yes, these Americans are brainwashed by their president, by the Republican Party and anti-liberal news sources like Fox. But the problem goes deeper.

Americans have long been infected by the disease of selfish individualism.

This is the country that elected a president who refuses to take any individual responsibility for his actions (or lack of action). “I don’t take responsibility at all,” Trump declared in mid-March in reference to the coronavirus. Instead, he has blamed everyone and everything from his predecessor Barack Obama to a Democratic Party determined to unseat him in November to America’s chief rival, China. Donald Trump’s narcissism is a particularly virulent strain of his country’s selfish individualism.

America suffers from a number of life-threatening infections: racial inequality, gender inequality, economic inequality. But the infection that will ultimately prove most harmful for the country will be its selfishness. Too many Americans belong to the cult of the individual. As the coronavirus is exposing very rapidly, this religion is in fact a death cult.