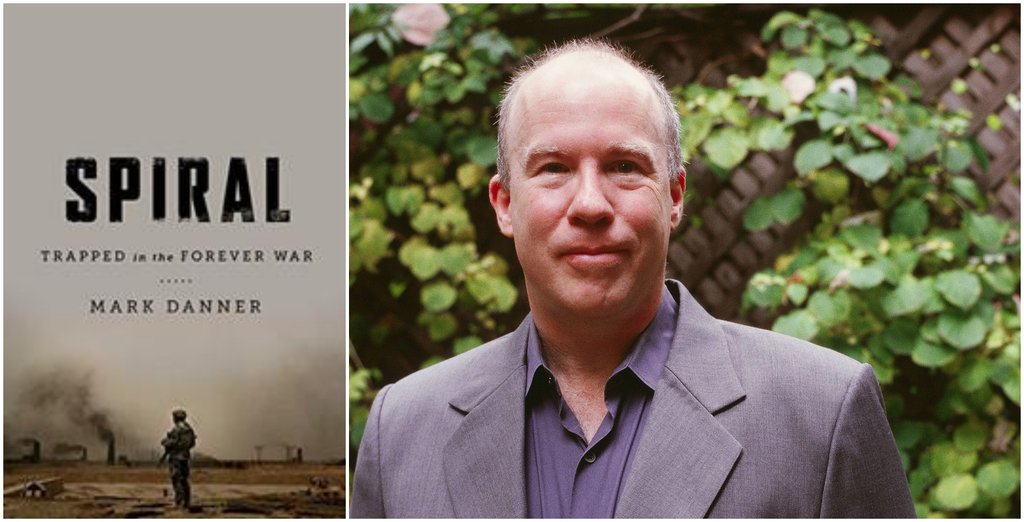 America’s Spiral Into Permanent War Seems More Foolish Than Ever

“We have fallen into a self-defeating spiral of reaction and counterterror,” writes Mark Danner in his new book Spiral: Trapped in the Forever War. “Our policies, meant to extirpate our enemies, have strengthened and perpetuated them.”

Danner — an award winning journalist, professor, and member of the Council on Foreign Relations who has covered war and revolutions on three continents — begins Spiral with the aftermath of a 2003 ambush of U.S. troops outside of Fallujah, Iraq.

The insurgents had set off a roadside bomb, killing a paratrooper and wounding several others. “The Americans promptly dismounted and with their M-16s and M-4s began pouring lead into everything they could see,” including a passing truck, he writes. “By week’s end scores of family and close friends of those killed would join the insurgents, for honor demanded they kill Americans to wipe away family shame.”

The incident encapsulates the fundamental contradiction at the heart of George W. Bush’s — and with variations, Barack Obama’s — “war on terror”: The means used to fight it is the most effective recruiting device that organizations like Al Qaeda, the Taliban, the Shabab, and the Islamic State have.

Targeted assassinations by drones, the use of torture, extra-legal renditions, and the invasions of several Muslim countries have combined to yield an unmitigated disaster, destabilizing several states, killing hundreds of thousands of people, and generating millions of refugees.

Putting War Crimes on the Menu

Danner’s contention is hardly breaking news, nor is he the first journalist to point out that responding to the tactic of terrorism with military force generates yet more enemies and instability. But Spiral argues that what was once unusual has now become standard operating procedure, and the Obama administration bears some of the blame for this by its refusal to prosecute violations of international law.

Torture is a case in point.

In the aftermath of the 2001 attacks on New York and Washington, the Bush administration introduced so-called “enhanced interrogation” techniques that were, in fact, torture under both U.S. and international law. Danner demonstrates that the White House, and a small cluster of advisers around Vice President Dick Cheney, knew they could be prosecuted under existing laws, so they carefully erected a “golden shield” of policy memos that would protect them from prosecution for war crimes.

In his Nobel Peace Prize acceptance speech, Obama announced that he had “prohibited torture.” But, as Danner points out, “torture violates international and domestic law and the notion that our president has the power to prohibit it follows insidiously from the pretense that his predecessor had the power to order it. Before the war on terror official torture was illegal and an anathema; today it is a policy choice.”

And president-elect Donald Trump has already announced that he intends to bring it back.

There is no doubt that enhanced interrogation was torture. The International Committee of the Red Cross found the techniques “amounted to torture and/or cruel, inhuman and degrading treatment.” How anyone could conclude anything else is hard to fathom. Besides the waterboarding — for which several Japanese soldiers were executed for using on Allied prisoners during World War II — interrogators used sleep deprivation, extreme confinement, and “walling.” Abu Zubaydah, who was waterboarded 83 times, describes having a towel wrapped around his neck that his questioners used “to swing me around and smash repeatedly against the wall of the [interrogation] room.”

According to a 2004 CIA memo, “An HVD [high value detainee] may be walled one time (one impact with the wall) to make a point, or twenty to thirty times consecutively when the interrogator requires a more significant response to a question.” There were, of course, some restraints. For instance, the Justice Department refused to approve a CIA proposal to bury people alive.

And, as Danner points out, none of these grotesque methods produced any important information. The claim that torture saved “thousands of lives” is simply a lie.

There was a certain Alice in Wonderland quality about the whole thing. Zubaydah was designated a “high official” in Al Qaeda, the number three or four man in the organization. In reality he wasn’t even a member, as the Justice Department finally admitted in 2009. However, because he was considered a higher up in the group, it was assumed he must know about future attacks. If he professed that he didn’t know anything, this was proof that he did, and so he had to be tortured more. “It is a closed circle, self-sufficient, impervious to disobedient facts,” says Danner.

The logic of the Red Queen.

Through the Looking Glass

The Obama administration has also conjured up some interpretations of language that seem straight out of Lewis Carroll.

In defending his use of drone strikes in a 2014 speech at West Point, the president said he only uses them “when we face a continuing, imminent threat.” But “imminent” means “likely to occur at any moment” and is the opposite of “continuing.” A leaked Justice Department memo addresses the incongruity by arguing, “Imminent does not require the U.S. to have clear evidence that a specific attack on U.S. persons and interests will take place in the immediate future.”

Apparently the administration has now added “elongated” to “imminent,” so that “a president doesn’t have to deem the country under immediate threat to attack before acting on his or her own.” As Humpty Dumpty says to Alice in Through the Looking Glass, “When I use a word, it means just what I choose it to mean.”

Danner turns the phrase “American exceptionalism” on its head. The U.S. is not “exceptional” because of its democratic institutions and moral codes, but because it has exempted itself from international law. “Americans, believing themselves to stand proudly for the rule of law and human rights, have become for the rest of the world a symbol of something quite opposite: a society that imprisons people indefinitely without trial, kills thousands without due process, and leaves unpunished lawbreaking approved by its highest officials.”

The war has also undermined basic constitutional restrictions on the ability of intelligence agencies and law enforcement to vacuum up emails and cell phone calls, and has created an extra-legal court system to try insurgents whose oversight and appeal process in shrouded in secrecy.

Failure by Any Measure

The war on terror — the Obama administration has re-titled it a war on extremism — hasn’t been just an illegal and moral catastrophe. It’s a failure by any measure. From 2002 to 2014, the number of deaths from terrorism grew 4,000 percent, the number of jihadist groups increased by 58 percent, and the membership in those organizations more than doubled.

The war has also generated a massive counterterrorism bureaucracy that has every reason to amp up the politics of fear. And yet with all the alarm this has created, a total of 24 Americans were killed by terrorism in 2014, fewer than were done in by lighting.

Terrorism, says Danner, is “la politique du pire,” the “politics of the worst” or the use of provocation to get your enemy to overreact. “If you are weak, if you have no army of your own, borrow you enemy’s. Provoke your adversary to do your political work for you,” he says. “And in launching the war on terror, eventually occupying two Muslim countries and producing Guantanamo and Abu Ghraib celebrating images of repression and torture, the United States proved all too happy to oblige.”

Danner argues that idea you can defeat terrorism — which is really just a tactic used by the less powerful against the more powerful — with military force is an illusion. It can and does, however, make everything worse.

Even the Department of Defense knows this. In 2004, the Pentagon’s Defense Science Board found that:

Increasingly the war on terrorism (or “extremism,” if you prefer) is a secret war fought by drones whose targets are never revealed, or by Special Operations Forces whose deployments and missions are wrapped in the silence of national security.

And as long as Obama calls for Americans “to look forward as opposed to looking backward,” the spiral will continue.