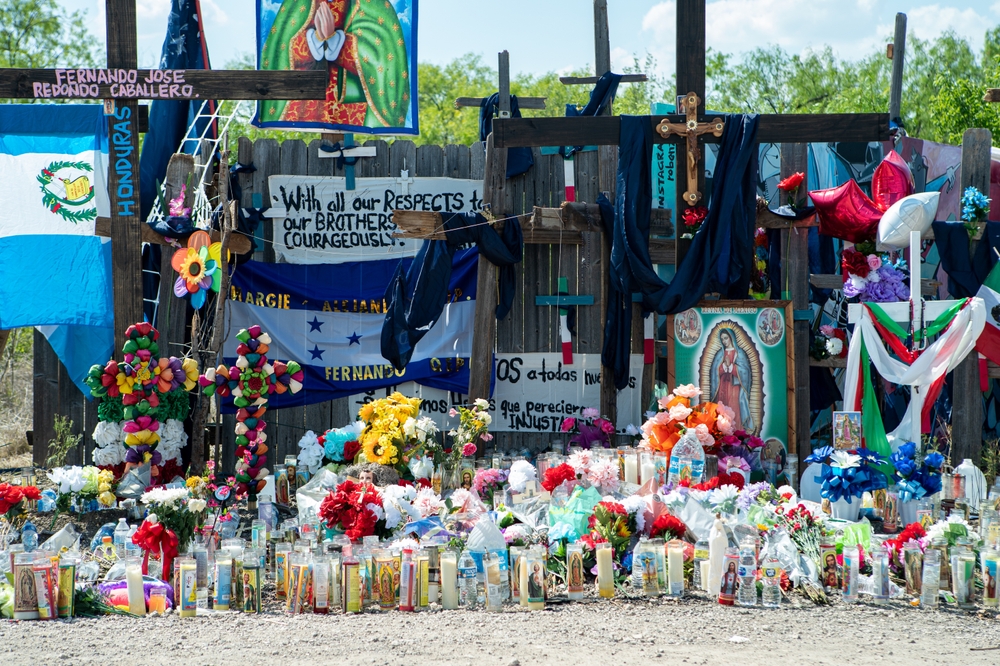 America’s War on Immigrants Hurts Its Poorest Citizens, Too

Playing politics with a humanitarian catastrophe eats up resources and erodes the civil rights of everyone, regardless of status.
By Shailly Gupta Barnes | October 19, 2022

In states across the country, cynical politicians are turning a humanitarian crisis into political theater.

New Hampshire Governor John Sununu recently announced that he was deploying the state National Guard to the U.S.-Mexico border, joining around two-dozen mostly GOP-led states. Meanwhile Florida, Texas, and Arizona have been busing migrants to blue states and cities, often under fraudulent circumstances.

Immigration is not a crisis — but the political, economic, and environmental factors that push people out of their homes are. So is the inhumane treatment these displaced people receive.

Republicans are most brazenly exploiting these conditions, but its origins cross party lines.

When President Clinton enacted the 1996 Illegal Immigration Reform and Immigrant Responsibility Act, he made more people eligible for deportation and made it easier to deport them. This drove up the undocumented population by making it riskier to seek documentation. And it laid the groundwork for a massive infrastructure to detain people.

Every administration since has expanded that infrastructure.

Under President George W. Bush, immigration enforcement moved to the new Department of Homeland Security, transforming a justice and labor issue into one of national security. Deportations started climbing, reaching more than 5 million under President Obama, despite his introduction of DACA to protect undocumented children.

President Trump escalated this trend, spreading dangerous lies about immigrants as violent criminals and invoking emergency powers to fund a southern border wall. Although President Biden reversed that move, our immigration system has not fundamentally changed.

Hundreds of thousands of immigrants live under constant surveillance, and nearly 60,000 were deported in 2021. Last year alone, 250,000 people were detained in unsafe and overcrowded immigration detention facilities where over 200 have died, including children. Every year, hundreds more die along the border itself.

Texas is a flashpoint in this crisis.

In May 2021, Texas Governor Greg Abbot issued a disaster declaration giving himself expanded powers and funding to crack down on migrants. Under “Operation Lone Star,” or OLS, he deployed thousands of state troopers and national guard troops to the border to arrest and detain migrating children, families, and refugees.

According to Fernando Garcia, director of the Border Network for Human Rights, OLS has not stemmed immigration flows. It’s simply redirected them to more dangerous and isolated areas.  It’s also stoking antagonism against people crossing the border. In September, two men shot at a group of migrants, killing a man and wounding a woman.

I recently joined a gathering in Texas convened by RITA, a statewide alliance to reform immigration in Texas. They said it was no accident that the crackdown comes despite a host of more pressing emergencies in the state, from widespread poverty to the large number of Texans without health care.

All told, OLS hurts migrants, poor people, and low-income people of every background. But for Texans, ending it could be as simple as turning out in the next election. There are 7.1 million eligible poor and low-income voters in Texas. That includes 2.4 million Hispanic people, many of them potential targets of Abbott’s crackdown.

They will need to overcome rampant voter suppression. But as Fernando says, “if border communities voted by just a few percentage points more, they could change everything.”

If poor and low-income Black, white, and Hispanic Texans turn out and stand together, they could change the outcome of Texas’s gubernatorial race. And from there, they could shift the entire political terrain — in Texas and every other state that’s playing politics with people’s lives.

Shailly Gupta Barnes is the Policy Director for the Poor People’s Campaign: A National Call for Moral Revival and the Kairos Center.