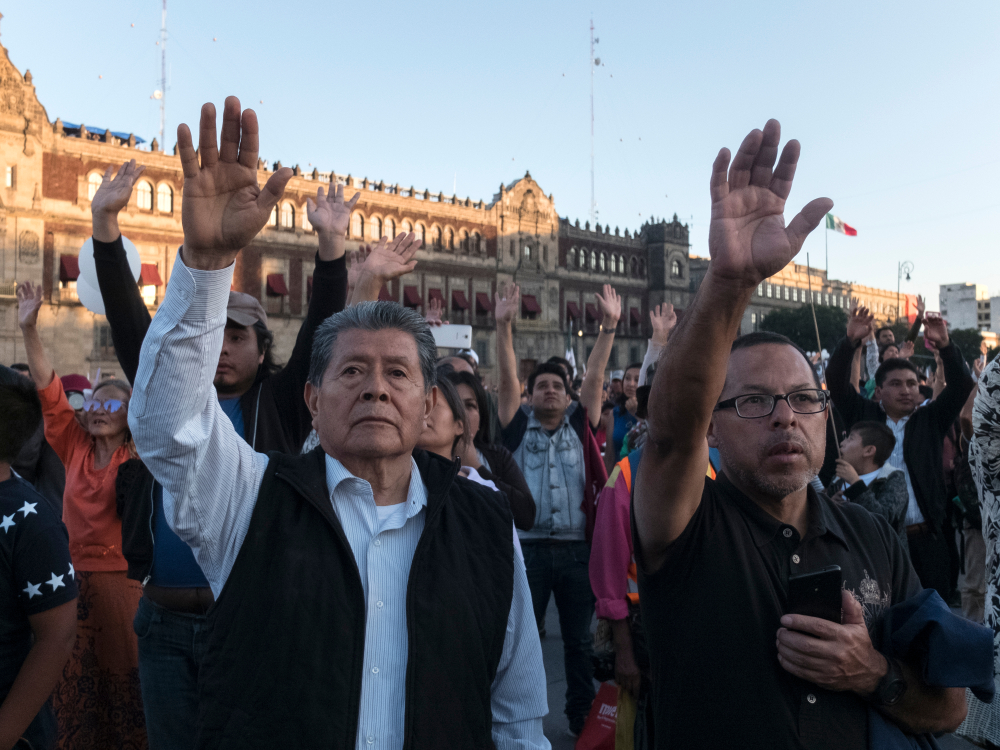 AMLO Goes Full Throttle Against Neoliberalism — But What About NAFTA?

I had the great fortune to attend the inauguration of Andres Manuel Lopez Obrador (or AMLO, as he is known) as the 58th Mexican president on December 1. The atmosphere at the Legislative Palace was electric with the knowledge that Mexico would be beginning its “Fourth Transformation” — following its 1810 independence, the 1855 reformation, and the 1910 revolution — with the first left-wing presidency in its history.

It was AMLO’s third attempt at the office. In 2006 Felipe Calderón orchestrated a cyber fraud that gave him a slim advantage over AMLO. And in order to win in 2012, outgoing president Enrique Peña Nieto engaged in tricks like giving away cash-loaded bank cards.

When AMLO arrives following his 2018 victory, his supporters chanted Si se pudo: “Yes we could!”

AMLO started his speech off by going full throttle against neoliberalism and corruption in Mexico, both of which he’s fought for decades. He said the crisis in Mexico originated not only because of the failure of the neoliberal economic model, but also because of the “deep predominance during this period of the dirtiest display of public and private corruption.”

The new president explained how Mexico’s economy grew from the end of the revolution in 1917 to the end of the 1970s at rates of 5 to 6 percent a year. With the neoliberal period starting in the 1980s came the debacle. It was marked by low growth, inflation, and indebtedness. Even after endless privatization schemes, the national debt reached 10 trillion pesos — the equivalent of over $500 billion, more than 42 percent of Mexico’s GDP — under Peña Nieto who sank down further in his chair when the subject came up.

AMLO rambled on against neoliberalism for quite a while. He said that another “pearl” of this model is the “privatizations and the corruption, the former being synonymous with the latter.” He explained how neoliberal policies have made Mexico a net importer of basic food staples like corn, how Mexican salaries have lost 60 percent of their purchasing power, and how Mexico became the one of the leading sources of out-migration in the world — such that 24 million Mexicans live in the United States, according to him.

“Political and economic power have fed and nurtured each other,” he concluded, “which has led to the robbery of the people’s property as well as the wealth of the nation.” Peña Nieto undoubtedly felt that at that moment all eyes were on him.

This was AMLO at his best. The script was completely his. Despite having created a mixed cabinet — one that includes pro-business people such as cabinet chief Alfonso Romo — for the purpose of helping him keep the trust of “the markets” during the exceedingly long six-month transition period, AMLO took the bull by its horns and made it clear what he has stood for all his political life.

As far back as 1991, he led rallies in his home state of Tabasco denouncing electoral fraud by the ruling party. Later he fought the privatization of Mexico’s oil state company PEMEX, denounced the Savings Protection Banking Fund (FOBAPROA) scheme that bailed out bankers at the expense of the Mexican people, and left the Institutional Revolution Party (that monopolized political power for decades) to form with Cuauhtémoc Cardenas the Democratic Revolution Party (that has now almost disappeared).

As mayor of Mexico City from 2000 to 2005, he initiated social programs to help the elderly and the handicapped, improved access to free medicines and schools, and ensured the construction of new preparatory schools — and even a new university — for Mexico City’s most disadvantaged sectors of society. He even had a new hospital built after decades of inaction from previous governments.

Eventually AMLO’s own PRD became corrupted, complicit with privatization schemes and anti-union reforms. So AMLO left it and formed the MORENA (Movement of National Regeneration) party, which now has a majority in both houses of the national legislature.

Moreover, MORENA won four states (out of eight that had elections this year), and several municipalities and big cities — including the biggest local prize, Mexico City, which elected a woman for the first time: Claudia Sheinbaum. MORENA offers the most gender-balanced governments and legislatures, and AMLO’s cabinet does as well.

But What About NAFTA?

With such political favorable scenario, I have no doubt that AMLO can deliver on promises to help Mexico overcome decades of increasing inequality, rampant poverty, and forced migration.

But one thing gives me pause.

In his acceptance speech against neoliberalism, he mentioned NAFTA only once. He said he, president Trump, and Canadian prime minister Justin Trudeau were talking about how to go beyond NAFTA and “reach an investment agreement among companies and governments of the three countries to foster development of Central American countries and also ours,” which he pitched as a “non-forcible” way to address “the migratory phenomenon.”

However, AMLO didn’t mention the recently concluded U.S.-Mexico-Canada Agreement (USMCA), aka NAFTA 2.0. Why would AMLO not tackle NAFTA more forcefully when this agreement has been the backbone of neoliberalism, and the cause of migration of millions of Mexicans to the United States?

Now that President Trump threatens to cancel NAFTA if legislators in the United States don’t immediately ratify the “new” version, AMLO and his MORENA party have a golden opportunity to get rid of it once and for all.

That’s exactly what Mexican civil society coalitions like Mexico Better off Without FTAs have been calling for.

It wouldn’t be a disaster for Mexico. Our trade with the United States would revert to WTO rules, which are similar to NAFTA’s. But withdrawing would effectively eliminate many other rules found in NAFTA (and apparently in the USCMA) that go well beyond trade. Those rules have handcuffed the Mexican government’s capacity to promote the Mexican economy, particularly in the countryside; support the livelihoods of indigenous people; expand the provision of affordable medicines; and protect the environment.

The MORENA party and AMLO should be very vigilant. They must wait until the Mexican Senate receives the official text of the USMCA in Spanish (Peña Nieto’s government pretended to “inform” the public with a propagandistic summary while the unfinished text remained only in English), and then should carry out an official consultation with all social and economic sectors.

AMLO has promised a series of consultations for development and infrastructure projects in Mexico. Good. He also consulted about the name of the new NAFTA — Trump’s “USMCA,” rebranding that consciously put the United States first — and rechristened it T-MEC (Tratado Mexico, Estados Unidos, Canada). Not so good, because it looks more like Trump-MEC. And it was Trump who pushed this new agreement on everyone.

More importantly, consulting people merely about the name of the renewed NAFTA is a serious shortcoming. What’s needed is a much broader consultation about all aspects of Mexico’s economy and society that have been, and will be, impacted by such an agreement.

In sum, there should be no ratification of the USMCA until the public has had an opportunity to read and discuss the official text already signed by Trump, Peña Nieto, and Trudeau — on Peña Nieto’s last day in office.

AMLO and MORENA represent a great hope for Mexicans. Opening the new NAFTA, before it’s ratified, to broad and binding consultation with the Mexican people would be a bold first step. Not doing so — and ratifying with haste — would be giving in to neoliberalism and its corrupt practice of passing these agreements behind peoples’ backs.

Manuel Perez-Rocha is an associate fellow on the Global Economy Project at the Institute for Policy Studies.