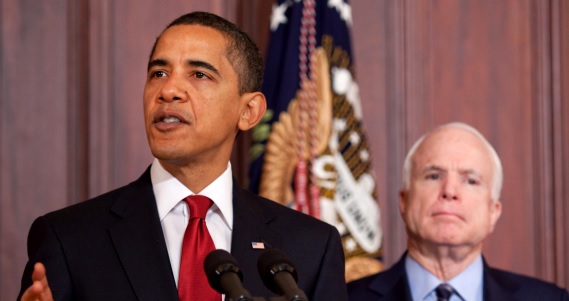 An Obama Attack on Syria Will Backfire (Part 1)

As the pretext for attacking Syria becomes shakier, the need for Washington to strike sooner increases.
By Ibrahim Kazerooni , Rob Prince | August 29, 2013

“Now we sit and wait while the Washington regime makes its next lethal move. Let us lift our voices in unison to prevent it.”

“Before another rush to judgment and ‘punishment’ based on a presumption of guilt, as in Iraq, this time, let the UN inspectors do their job: We still don’t know who used chemical weapons in Syria — regime or rebels. Without UN Security Council’s approval, any military action by US and its NATO or even Arab allies will itself be illegal, an international war crime itself. Such an attack will not protect innocent civilians, but hurt them. US attacks will backfire, trigger a retaliatory response, escalate the civil war into region or world war.”

This is the second time in six months that the United States has accused the Syrian government of using chemical weapons. The first time, Washington was forced to eat its words as international organizations, including Human Rights Watch, claimed that it was the rebels and not the government forces which had employed them.

Despite calls from all over the world, not to proceed, it appears that the Obama Administration is heading towards a major air attack on Syria. France, UK and Israel will be involved in some measure, either in preparing targets or in the actual bombing. Syria has both insisted that it was not the Assad government which used nerve gas in a Damascus suburb that might have killed as many as 1,300 people but U.S. and Saudi backed Islamic militants who have hijacked the opposition movement, much in the same way similar elements did likewise in both Libya and Mali.

The claim that it was the Syrian government that gassed its own people is wearing thin. Although the Obama Administration continues to again accuse the Assad regime of using sarin gas on its opponents, to date there is no evidence – none whatsoever – that the Assad government has used chemical weapons. The Obama Administration appears to be racing against time. The longer the attack is delayed the more its justification is undermined by both the facts and worldwide opposition to it.

In fact, the pretext for attacking Syria is unraveling, almost daily and as it does, the justification for launching the air war. As the pretext becomes shakier, the need for Washington to strike sooner increases. The parallels with the March 2003 U.S. led invasion of Iraq are striking. Then, Washington first fabricated the danger of Iraqi weapons of mass destruction and a supposed link between Saddam Hussein and Al Qaeda’s Osama Bin Laden as the main reasons for launching the war that destroyed a country. When later, both claims proved to be bogus, the then Bush Administration blithely argued, again with no substantial arguments to back up the claim, that the invasion was worth it all the same.

The world is watching as a similar bogus pretext for military intervention unfolds before our very eyes, with, once again, the full participation of the mainstream American media. The Obama Administration in fact now no longer wants the UN inspectors to investigate the Syrian chemical attack for fear the results could easily contradict administration claims. U.S. Secretary of State John Kerry, who has made a smooth transition from a 1960s anti-Vietnam War veteran to a post-millennial U.S. Senator in support of the attack on Iran, called UN Secretary General Ban Ki Moon, asking that the United Nations call off its investigation of the chemical attack. Washington worries that the results could undermine its war plans. Although having proven himself, time and again, ‘pliable’ to U.S. strategic interests, Moon has shown a bit of backbone this time, and despite Kerry’s protests, Moon has ordered the investigation to continue.

Actually there is one strand of logic which suggests that the results of a UN inspection in Syria are academic – the Obama Administration is preparing to go to war again. Although they adamantly deny that the goal of a cruise missile strike is ‘regime change’, this is of course, nonsense. The strike might not have this immediate effect, but it is meant to weaken the Assad government’s military capabilities and strengthen the position of the Syrian rebels, now dominated by Wahabbist/Salafist elements, in their efforts to overthrow the government.

A conflict that could spill over beyond Syria’s borders

The war talk is not just coming from Washington.

The militaries of virtually the entire region are on alert. It might not take much to set a war in motion that extends far beyond Syria’s borders. What makes matters worse is that many of the parties are itching for a fight. Indeed, a scenario not unlike that which existed in Europe in the summer of 1914 appears to be shaping up. Both France and Great Britain appear to be anxious not to be left out of the fighting. There is both a French and British submarine in the Eastern Mediterranean joining. The French President Francois Hollande says France is “ready to punish Syria.” On the other side of the coin, Syria and its allies in the region (and beyond) have vowed to defend themselves, whatever that might mean. Iran has threatened to attack Israel if Syria is attacked. According to the European Times, Russia has threatened to attack Saudi Arabia. The article describes a grim “urgent action memorandum” issued today from the office of President Putin to the Armed Forces of the Russian Federation  ordering a “massive military strike”  against Saudi Arabia in the event that the West attacks Syria.

But if the war talk is not just coming from Washington, it is the Obama Administration that is in the lead in this respect.

All this comes at a most curious time, just after the Syrian rebels had been soundly defeated, so much so that Washington was forced to grudgingly agree to negotiations in Geneva, the so-called Geneva II talks. The prospect of the talks gave a ray of hope that some kind of political settlement might be shaped that could end the bloodshed that has now taken somewhere in the region of 100,000 lives and left more than a million refugees. Another related development was the relative withdrawal of Qatar as a major political player in Middle East politics, at U.S. and Saudi request, and the re-emergence of Saudi Arabia as a substantial regional power broker, always, in the end, in the service of Washington. The Egyptian events have also had their effect as, once again, Washington sees the regional situation moving out of its control, its efforts at crisis management – its essential approach to the Arab Spring – falling flat once again.

Finding that none of its regional allies – not the Saudis, Qataris, Egyptians, Turks, nor Israelis  –  have been able to control the situation to Washington’s liking, the Obama Administration has decided to intervene itself – along with its usual subsidiary partners – UK, France (with Israel playing a role too in all this). The initial U.S.-orchestrated (whom else?) attempt to overthrow Syria has failed; and now it is starting to backfire. If Assad’s Syria survives it will become a center of radical nationalism throughout the region. Washington cannot tolerate its failure to have brought down Assad and they fear the consequences. Thus the need to go once more into the breech – this time with U.S. cruise missiles rather than with Wahabbist/Salafist proxies. Since the Saudis and the Turks have failed to “do the job” the Obama Administration finds it necessary to step in. This proposed strike (it might have happened already by the time this is published) is essentially a warning shot – not just to Syria but to the whole region. The message, whether it is a one, two, three day attack is the same: look at the damage the U.S. and friends can do in a few days! And this is just a preview of what is to come  if you (you = the Syrians, Iranians, Hezbollah, the Palestinians) don’t fall in line with U.S. regional prerogatives.

The Neo-cons back in the driver’s seat of U.S. Middle East policy: the feast of the hawks

After a short time ‘in the wilderness’ but not very far out there at that, the recent hardening of U.S. policy towards Syria represents a shift to the right. The neo-cons are back in the driver’s seat, driving the country once again towards the only foreign policy agenda they seem to understand: war. There are a number of turning points in this policy but the most blatant one was Obama’s bizarre selection of two Republican hawks to represent the administration in the Middle East. Sending John McCain and Lindsay Graham to the Middle East in early August was akin to sending the fox into the hen house. What else would they recommend other than military action. Had Obama hoped to send a different, more conciliatory message to the peoples of the region he could have sent representatives of another persuasion – Jimmy Carter, Jesse Jackson – even Madeleine Albright – there are others. But McCain and Graham? Who pressed the president for this choice whose goal was to unleash this feast of the hawks.

John McCain has long been associated with the most hawkish wing of U.S. foreign policy. He maintains a close association with a number of ultra-conservative think tanks, among them the Foundation for Defense of Democracies (FDD). Among its funders is Bernard Marcus (founder of Home Depot), Paul Singer (a major fundraiser for Romney’s presidential campaign) and Sheldon Adelson of the Las Vegas Sands. FDD’s president is Clifford May who once upon a time was an ace reporter and Bush supporter for the now defunct Rocky Mountain News before he moved on national prominence. Colorado’s gain (his leaving Denver) was Washington’s loss. In one year, 2011, FDD received $19 million in contributions from Marcus, Singer and Adelson alone. One of their main goals is the overthrow of the Iranian government but most over the past year they have worked assiduously for regime change in Syria. There are other neo-con think tanks like this that are active in Washington. Why Obama decided to listen to these voices now is a question that still needs addressing. But it is the McCains and Clifford Mays of the world that have gotten Obama’s ear – not the likes of Andrew Bacevich, former U.S. military officer, who has counseled caution in the aftermath of the U.S. failures in Iraq, Afghanistan.

McCain’s visit to Egypt and Syria marked a shift, a hardening in the Obama Administration’s policy, so much so that it seems certain that shortly thereafter – that is almost a month ago – the dynamics were put in motion for an air war against Syria. Everything since then has entailed providing the pretext and getting the media on board, neither particularly difficult to do these days. Concerning the pretext, the evidence is fast shaping up that it is little more than a classic false flag operation. We’ve seen all of this before. Let’s act now – what is needed is a pre-emptive peace strike. Let’s stop this war before it begins. The crisis in Syria will not be resolved militarily; only a political solution can end the violence. Time to get back to Geneva.