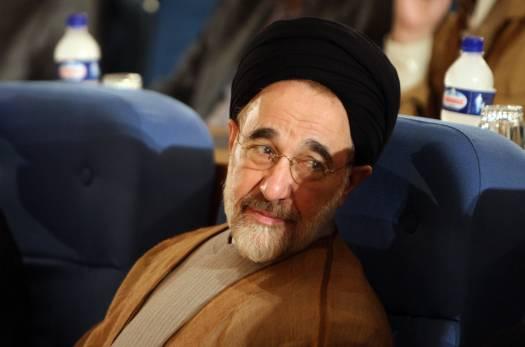 Former Iranian President Mohammad Khatami and the road not taken.

An Alternative to War with Iran

With diplomacy getting short shrift, Western containment of a nuclear Iran may be the only alternative to war in an increasingly militaristic climate.
By Richard Silverstein | January 25, 2012 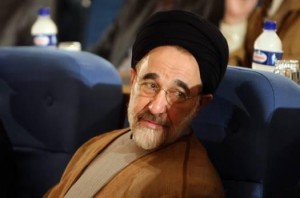 Former Iranian President Mohammad Khatami and the road not taken.

Relations between Iran and the West, fraught with tension and conflict for decades, have in the past few months reached a fever pitch. There is talk of war on a daily basis from both sides. Hundreds of millions, if not billions, have been spent both to fuel the Iranian missile and nuclear program and the counter-measures taken by the West to frustrate it. Leaders on both sides have worked themselves into paroxysms of rage regarding the alleged homicidal intensions of the other side.

The situation is volatile and the danger of war real. But the premise of the Western approach to Iran has dangerous shortcomings.

There is a common conception of Western policy as based on a two-pronged, carrot and stick approach: one a diplomatic track and the other a military threat. There is certainly the guise of a real diplomatic track. Both sides have talked at various times of the need for negotiations, and for very short periods there have been talks. Recently, Iran expressed willingness to begin a new round of talks with its opponents about its nuclear program.

But by all appearances, the Western approach is solely designed to achieve Iranian capitulation to Western demands that it dismantle its nuclear research program. It is not designed as an open-ended negotiation in which both sides are open to compromise to achieve a mutually agreed-on objective. The United States and Israel are little interested in acknowledging Iran’s perceived interests or compromising over its nuclear program so that each side will end up with some of its key interests satisfied.

To study the efficacy of the diplomatic track, let’s look at its history. In 2003, Iranian President Mohammad Khatami made his famous offer to discontinue Iran’s nuclear program in return for the full normalization of its relations with the United States, including an end to sanctions. In the run-up to the Iraq War and in the context of the Bush-Cheney “stand tough” approach to the Islamist militancy of that era, the United States not only spurned the offer, it soundly berated the Swiss diplomat representing U.S. interests in Iran for having the temerity to pass the proposal along.

Barack Obama came into office with some vague notions of pursuing talks with Iran, criticizing the unhelpful threats of the previous administration. Western powers, however, only held talks with Iran for a mere three weeks. At those talks, the West again presented demands on a more or less take-it-or-leave-it basis; this was again not a negotiation of equals. It was one side communicating to the other what it expected of them to end the impasse. That’s why the talks ended almost before they began.

In recent years, Brazil and Turkey successfully negotiated a compromise with Iran involving the transfer of the country’s enriched uranium to a third country. But the Obama administration dismissed the plan and wasn’t even willing to pursue further negotiations about it.

If the diplomatic track was truly what Western officials have claimed it to be, there would be a more flexible and less destructive sanctions regime in place. Even officials in the U.S. government told The Washington Post that U.S. policy toward Iran, including the sanctions plan, is designed to achieve regime change, rather than policy change. The administration later attempted to deny that its officials had made such a claim, but it’s no wonder that Iran understands the U.S. approach as unilateral and categorical, rather than open-ended.

So there is not a two-track policy regarding Iran. There is instead a one-track policy with two facets. On the one hand, there is a program of sanctions and covert war designed to intimidate and bloody Iran into capitulation. But if that doesn’t work (and it surely cannot), there is a military option designed to destroy Iran’s nuclear program. It’s no surprise, then, that the Iranians see their enemies closing in on them like a vise. An enemy who believes he has no options left is very dangerous. He is likely to lash out in unforeseen ways. Such desperation is precisely what could fuel not just a bilateral military conflict, but a full-scale regional war.

There is another misconception about Western policy. The liberals among us talk about a “military strike” as an option of last resort. The more clear-eyed, like the Brookings Institution’s Bruce Riedel, talk of a potential war against Iran. Neither is precisely right. As Israeli journalists have pointed out, there already is a war under way against Iran. It is bought and paid for by a $400 million allocation by the Bush administration in 2007. It has funded all the tools in the Mossad arsenal that were used to sabotage Iran’s nuclear program and foment general unrest inside the country.

Former Mossad chief Meir Dagan outlined Israel’s thinking in a Wikileaks cable in which he told the State Department’s Nicholas Burns that Israel planned to sow general discord inside Iran by acts of sabotage perpetrated by domestic minority groups like the Sunnis and Kurds:

Dagan said that more should be done to foment regime change in Iran, possibly with the support of student democracy movements, and ethnic groups (e.g., Azeris, Kurds, Baluchs) opposed to the ruling regime…Iran’s minorities are “raising their heads, and are tempted to resort to violence.”

Dagan urged more attention on regime change, asserting that more could be done to develop the identities of ethnic minorities in Iran. He said he was sure that Israel and the U.S. could “change the ruling regime in Iran, and its attitude towards backing terror regimes.” He added, “We could also get them to delay their nuclear project. Iran could become a normal state.”

Though the cable doesn’t mention the Mujahedeen-e Khalq (MEK), the Mossad clearly views it as a potent force with an extensive internal network within the country, whose muscle could be exploited to further Israeli interests.

Mark Perry recently published an expose of one particular Mossad project, a false flag operation in which it recruited the leader of Jundallah, a Sunni terrorist group operating in Iran, by posing as NATO and CIA agents. When the Bush administration discovered the nature of the program, it was furious. But ultimately it decided it had other fish to fry and would not make a major stink about the danger the duplicitous operation posed to U.S. agents in the region.

Such Israeli tactics suggest that Israel pursues its own interests with little or no regard for how its behavior will impact friend or foe. For example, it utilizes the MEK as a partner in many of its terror operations inside Iran, even though U.S. State Department officially designates the MEK as a terror group.

This, of course, doesn’t stop the MEK and its well-paid domestic allies in the United States from pursuing an aggressive campaign to delist it as a terror group. Millions of dollars have been spent to further this goal, including enlisting prominent figures on both the Democratic and Republican sides to shill for delisting. The MEK appears to believe that terrorist activities in which it may be engaged inside Iran will not have an impact on its delisting by the United States. This is all the more reason for journalists in Israel and outside to make known its cooperation with the Mossad, so that the U.S. government can make an informed judgment about whether or not the MEK has renounced terrorism as it claims.

Some analysts have called this a black ops campaign or covert war. Whatever we call it, it is war by another means. If the United States is serious about seeking a diplomatic solution with Iran, then why would it both encourage and fund such a powerful campaign of terror inside Iran?

The campaign has included the Stuxnet computer worm, most certainly developed by the Israel Defense Force’s cyber warfare Unit 8200 with some U.S. assistance. Israeli security correspondents and a former Israeli minister reported to me that the Mossad and the MEK have jointly engaged in numerous terror operations that have killed five nuclear scientists and resulted in an almost fatal attack on a sixth. There have been crashes of Revolutionary Guard military planes and two more recent explosions: one that wiped out a missile base and killed the Iranian Revolutionary Guard general directing the entire national missile program, and another that sabotaged an Isfahan uranium enrichment facility.

So how much credence should Iran’s leaders put in the claim that the West is pursuing a diplomatic track? If there is no such real option for negotiation to resolve this conflict, is there any other prospect than war?

An Alternative to War

After following Iranian-Western relations for years, I believe the diplomatic track is a mirage and that the sanctions regime, which the West has pursued without success for 30 years, will not gain Iran’s capitulation. That leaves only two options: war, or Western impotence in the face of Iran’s implacable determination to pursue a nuclear option. Either option is bad, but the first is far worse than the second.

The fallout from a war with Iran has been widely discussed. Iran might mine the Straits of Hormuz and activate its shore-based defenses to repel U.S. naval forces. The price of oil would skyrocket, imperiling a global economy already teetering on the brink of recession or worse. Iranian allies in Lebanon, Gaza, and Syria could make mayhem for Israel and the United States alike. Iran could activate elements inside Afghanistan and Iraq to make life even more miserable there than it already is.

Since the United States doesn’t appear prepared for a real negotiation with Iran regarding its nuclear program, there is only one real approach short of war: containment. The United States adopted this approach during the Cold War against the Soviet Union. Though it was never optimal, considering the dysfunction in the relationship between the superpowers, containment worked reasonably well until the Soviet collapse in 1989.

As former Defense Department Undersecretary Colin Kahl argues in his latest Foreign Affairs article, the United States already has the assets in place in the region to pursue a policy of containment: 40,000 troops are stationed in the Gulf, with 90,000 more in Afghanistan. There are two carrier task forces deployed in the Gulf, and various allies view Iran with deep suspicion. They could be a local bulwark against any possible Iranian aspirations that threaten the regional status quo.

Containment still isn’t an optimal approach, but it’s the least bad one considering the current dysfunction characterizing relations between Iran and the West. In the future, Iran may turn to a reformist, more democratic government that might approach these issues differently. Or the climate in the West may change so that it would be willing to seriously engage with Iran on a similar basis to the Khatami 2003 proposals. But given the almost lunatic tone of the Republican presidential debates concerning Iran, and the fact that Barack Obama appears convinced that he must maintain impeccable national security credentials to protect his right flank, the United States is unlikely to adopt a more reasonable, pragmatic approach to Iran.

Under the circumstances, containment is the only remaining option that doesn’t lead to regional war, stalemate, and deeper dysfunction.