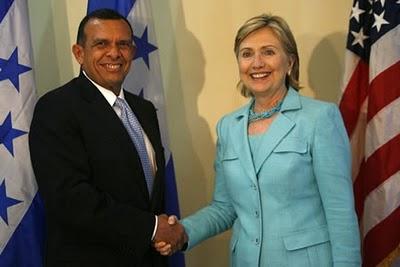 An Inconvenient Truth in Honduras

At the same time that the United States is praising democracy in the Middle East, it is helping to suppress it in Honduras.
By Rodolfo Pastor Campos | April 7, 2011 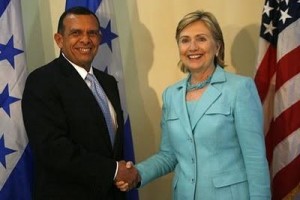 At the same time that the police and the Honduran army were brutally repressing popular protests of teachers, students, and resistance members for the sixth day in a row, Julissa Reynoso was greeting Honduran President Porfirio Lobo at the presidential palace. According to the press release issued by the U.S. Embassy in Tegucigalpa, Assistant Secretary of State for Western Hemisphere Affairs Reynoso was there to recognize President Lobo’s achievements regarding national reconciliation, human rights, and the return to democracy in Honduras.

That same day, in Washington DC, the Inter-American Human Rights Commission of the Organization of American States held a series of three hearings regarding the ongoing crisis in Honduras. National and international human rights organizations, renowned human rights activists, and the direct victims of the repression and political persecution presented the cases one after the other. Representatives of the Honduran government were also present to receive the reports and answer the accusations.

Documents, pictures, videos, and statistics of the beaten, the arbitrarily detained, the tortured, and the executed were all presented to the commission. The commissioners then listened to the Honduran government’s presentation before reaching their initial conclusions. By the end of each of the three sessions, the commission clearly and severely condemned the government’s violent abuse of human rights activists, peasants, teachers, students, journalists, and other members and supporters of the popular resistance movement.

President Lobo’s representatives provided no credible response or convincing argument backed up by facts for any of the evidence presented to the commissioners. As they scrambled to justify a state policy of repression and persecution, the government representatives ended up contradicting themselves. When the commissioners inquired about the total number of police officers charged with human rights abuses since the coup, the Honduran government representatives could not provide one. When the commission asked about the number of public prosecutors appointed to defend human rights, the government claimed “around 18,” but the commission subsequently determined on a visit to the country that only two had been appointed. The commissioners contrasted the explanations given by the Honduran government’s officials with the results of the commission’s own recent findings while in Honduras, making it obvious that the official presentation was at best deceiving if not outright fictitious.

Furthermore, the commissioners also observed that although one member of the Honduran government delegation was an army officer, no one represented the police. This troubled Commissioner Felipe Gonzalez, as an indication of the nature of the regime and the ensuing militarization of Honduras. The commissioners also noted their concern that the Honduran government increased funding for both the police and the army while significantly decreasing funds for health and education.

The Supreme Court’s dismissal of a number of judges for having publicly criticized and denounced the 2009 coup underscored the serious corruption of the judicial system, its lack of independence, and the resulting absence of the rule of law in Honduras. The Commission encouraged a profound and extensive reform of the justice system and demanded, at the end of the sessions, that the Honduran government immediately halt the repression and political persecution, show restraint in its use of force, and commit to the promotion and respect of human rights.

Throughout that day and all through Deputy Assistant Secretary Reynoso’s three-day visit, violent repression continued in Honduras. The police and the army once again beat the teachers and the students, as the Autonomous National University came under tear-gas attack with canisters made in the USA along with water cannons, rubber bullets and repeated blows of the batons.

A few days earlier, Ilse Velasquez, a teacher and one of the founders of the Committee of the Families of the Detained and the Disappeared in Honduras (COFADEH), died when a tear gas canister hit her head during a protest. At the hearings, COFADEH representatives documented over 120 murders of members of the Honduran resistance, including union leaders and members of the LGBT community.

And then, just last week, the police burned and beat Miriam Miranda of the National Fraternal Black Organization of Honduras before detaining her on charges of sedition for participating in a popular resistance protest in solidarity with the teachers.

As Marcia Aguiluz from the Center for Justice and International Law in Washington, who has testified before the U.S. Congress and the IHRC about the crisis in Honduras pointed out, “President Lobo and his government have continued a state policy of repression against human rights activists and any kind of political dissent, a policy inherited directly from the de facto regime that came to power through the 2009 coup.” Attorney Anjana Samant from the Center for Constitutional Rights, also said at the hearings that “this crisis is far from over. Many have died and more lives are still at risk given the worsening human rights situation in Honduras. To pretend that all is well and that the country is on the road to reconciliation after controversial elections that were neither free nor fair is to enable the continuation of repressive tactics and human rights violations.”

Impunity still abounds in Honduras, and the perpetrators of the abuse are not only free but also thoroughly empowered to continue their activities. In Honduras human rights and justice are nonexistent. Democracy is no more than a disguise for a regime that, lacking any kind of legitimacy or the minimum consent necessary to govern, has relied on the selective and systematic use of violence to crush popular dissent and resistance to its abuse.

Despite this inconvenient truth of continued repression, the Honduran government and its U.S. backers claim that the “free and fair” election of Lobo reestablished the constitutional order – political repression and censorship during the elections notwithstanding – as they praise him for his “democratic achievements” and advocate for the country’s prompt readmission to the Organization of American States (OAS).

“Honduras has taken important and necessary steps that deserve the recognition and the normalization of relations,” said Secretary of State Hillary Clinton at the OAS annual meeting in Peru last June. “We saw the free and fair election of President Lobo, and we have watched President Lobo fulfill his obligations… including forming a government of national reconciliation and a truth commission. This has demonstrated a strong and consistent commitment to democratic governance and constitutional order.”

President Obama has been standing up for human rights and democracy in the Middle East and other parts of the world, supporting popular revolutions against tyrants. “Born, as we are, out of a revolution by those who longed to be free, we welcome the fact that history is on the move,” said President Obama in his recent address to the nation regarding the bombing of Libya, “because wherever people long to be free, they will find a friend in the United States.” Yet, over the same period, the United States has significantly increased the funding of the same police and army that executed the coup d’etat in Honduras in 2009.

The repression will likely continue as long as the United States turns a blind eye to the crisis and keeps funding the regime. President Obama should act promptly and in accordance with the principles he publicly stands for. The U.S. should immediately stop funding the police and the army of Honduras and demand that President Lobo halt the repression. Any genuine reconciliation and normalization in Honduras will demand profound reforms, a full commitment to human rights and an inclusive and transparent process that brings real justice and true democracy to the people.

Rodolfo Pastor CamposRodolfo Pastor Campos served as chargé d’affaires of the embassy of Honduras in Washington DC during the coup. He is a founding member of Hondurans for Democracy, a contributor to Foreign Policy In Focus, and currently a student at the Center for Latin American Studies at Georgetown University.