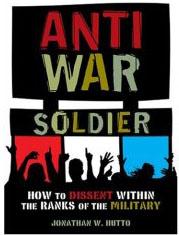 Hutto talks about the founding of the Appeal for Redress and how the GI movement during the Vietnam War paved the way for the current movement.
By Erik Leaver | June 6, 2008

After five years of war and little end in sight, much of the anti-war movement has acquired a case of “war fatigue.” Over the last two years, some of the most energized movements opposing the war have not been those made up of civilians but those who have served on the front lines.

Iraq Veterans Against the War, with their Winter Soldier hearings, have brought their stories to the public. Along with IVAW, the Appeal for Redress is organizing where no one else is–inside the military itself. What began on October 23, 2006 with 65 active-duty soldiers has now swelled to over 2,000. Documenting the history of this movement as well as telling his own personal story of how he became an “Anti-War Soldier” is one of the leaders of the movement, Jonathan Hutto.

In an interview with Erik Leaver, Hutto talks about the founding of the Appeal for Redress, how the GI movement during the Vietnam War paved the way for the current movement, and what impact the Appeal is having both inside and outside of the military.

Erik Leaver: As an active-duty soldier, the risk of forming the Appeal for Redress as well as writing this book must have been quite high. What motivated you to start the movement and then also write this book?

Jonathan Hutto: The risk was quite high. I vividly remember the day before we went public on October 23rd 2006 being on the phone with David Cortright and representatives from the Center on Conscience and War along with active duty members Liam Madden (Marines, Quantico in Virginia) and Linsay Burnett (Army, Fort Campbell in Kentucky). Although we knew DOD directives protected our actions, we still understood we were going against an institutional culture which did not support activism among active duty.

My motivation to begin the Appeal was multi-fold. Discovering and learning the history of the Vietnam GI Movement emboldened my desire to bond with others in the enlisted ranks in expressing my opposition to the Iraq War. Writing the book was an opportunity to publicize to a larger audience and hopefully to motivate other active duty to get engaged in the Appeal and the movement for social justice as a whole.

Leaver: Is there a place for anti-war soldiers in the military?

Hutto: Yes, I am a witness! All military members take an oath to defend the Constitution. Taking this oath does not mean we have sacrificed our rights under that constitution. The practice of building democracy and equality should not end with one’s induction into the armed forces.

Leaver: David Cortright’s book, Soldiers in Revolt, about the active-duty soldiers’ movement back during Vietnam clearly had a powerful effect on you and your colleagues. What’s different about the movement now as opposed to the movement then?

Hutto: First, the birth of the GI Movement took place within a broader social justice movement throughout America and the entire world. The GI Movement is recorded to have started in the mid-1960’s with the refusal of individual soldiers to report to Vietnam beginning with the individual resistance of Howard Levy, Larry Duncan, and a few others. This was at the height of the civil rights movement and the anti-war movement. It was also on the cusp of the climatic year of 1968 (anti-war protestors getting their heads bashed at the Democratic Convention in Chicago, workers and students shutting down France ). The contrast is we don’t have a broader movement today through which the masses are educated on how to view the wars in Iraq and Afghanistan. The masses of Americans in 1967 watched a world heavyweight champion, Muhammad Ali, refuse induction into the Armed Services. The next year the world witnessed Tommie Lee Smith and John Carlos putting their fists in the air in solidarity with the people’s struggle taking place back home in America while receiving their gold medals in Mexico City. Acts such as these have a profound effect upon the masses. We lack this broad base movement in the current context.

Second, you had a draft which politicized an entire generation. While the base of the GI Movement was comprised of volunteers and not draftees, the draft politicized the population in a way the current volunteer Army does not. The current volunteer Army is an economic draft mostly of those on the margins of society. And the volunteer Army does not politicize the entire populace. My mother, a 1969 graduate of Clark College in Atlanta, Georgia had classmates from her college that went to Vietnam and never returned. The overwhelming majority of college students in America today do not face this prospect. Our last two presidents, Bill Clinton and George Bush, were both affected by the prospect of serving in Vietnam. That will not be the case for those of my generation running for the Presidency in the next decade or so; the Iraq War would not have affected them in such a way.

Third, the GI Movement of the Vietnam era used both traditional and untraditional tactics and strategies to make their voices heard. They used the media and they lobbied the government but they also dared to build a mass movement. In 1971, you had over 500 active-duty GI’s marching in “Armed Farces Day” against the Vietnam War. The Appeal for Redress has yet to build beyond reliance on governmental institutions and to grip the masses of GI’s. The GI Movement touched the lives of the masses of GI’s as evident by the military establishment admitting the breakdown of the Army in 1971.

Leaver: Why is this movement important now?

Hutto: It’s important now because ultimately it’s going to take the soldiers, sailors, and marines themselves allied with the anti-war and social justice movements to end this war. It’s evident that ending the war will not come from the politicians in Washington. The Democratic Congress, led by House Speaker Nancy Pelosi, has not stood firm against continued occupation of Iraq. Historically, it is not the politicians but the people and soldiers within the military who ended the war in Vietnam. The power of the soldier’s movement within was evident with the admission of Colonel Robert Heinl that the Army had collapsed and soldiers were mutinous and refusing combat. It will take the anti-war movement allied with citizen-soldiers within the ranks to bring this war to an end and build a more just and humane society.

Leaver: How has the military been affected by the efforts of the Appeal and IVAW?

Hutto: The military has been affected by Pentagon officials having to speak publicly on our constitutional rights to speak out when we are off-base and off-duty. This is unprecedented in the current context and gives us leverage in our recruitment. IVAW forced the brass in the spring of 2007 to back down from lowering the discharge status of Adam Kokesh below a general discharge. Overall, I believe both of these movements have provided an outlet for active-duty soldiers to raise their voices as evident by IVAW building of active-duty chapters on military bases.

Leaver: What are the biggest hurdles the movement both inside and outside the military faces today?

Hutto: The biggest hurdle for the anti-war movement as a whole is to build a culture of operational unity. This is what the National Assembly to End the Iraq War is working to do the weekend of June 27th-29th in Cleveland, Ohio. The sectarianism must be subordinated to the overall needs of the masses and the soldiers dying and coming back mangled from Iraq. The anti-war movement must move away from total/sole reliance on liberal politicians and celebrities with more of a focus on organizing the masses from within the unions, religious institutions, campuses, mass organizations, and just everyday people unaffiliated with groups but in solidarity with the movement and its demands. From within the military, the challenge is to move military members from fear of the brass towards challenging the brass on the question of war and the basic grievances active-duty endure daily.

Leaver: Besides trying to end the war, are there other issues the Appeal is trying to confront?

Hutto: The legal basis for the Appeal is DOD directive 7050.6 (The Military Whistle-blower Protection Act). This gives military members the right, without prior command approval, to speak with a member of Congress on any issue. That being stated, we have pushed for military members to not only address issues of war and occupation but basic grievances they endure on the job. Before initiating the Appeal, I personally was the victim of racial harassment/hate crime when I had a hangman’s noose put in my face by other Non-Commissioned Officers. I appealed to Congressman John Lewis of Atlanta, Georgia to advocate on my behalf. The Appeal stands against all forms of oppression in the ranks including but not limited to racism, sexism, homophobia, and all forms of intolerance. The Appeal advocates for military members to address any and all concerns extending from stop-loss, Individual Warrior program, Individual Augmentee, extended tours, the failure of don’t ask don’t tell and the failure of the VA to address the enormous health needs of our returning vets.

Leaver: If you could talk to someone contemplating joining the armed services, what would you say to them?

Hutto: I would tell them to research carefully all of their options before joining and to understand fully the sacrifice on all levels they are about to endure. They must be clear that their life could be sacrificed on a battlefield for Imperialist aggression. I would tell them that all the educational benefits being promised to them by their recruiter is secondary to them performing and serving the mission. If it’s education they desire, I would strongly urge them to look at other options such as community college. I joined based on economic compulsion and I find myself to be lucky in comparison to those coming back from Iraq with mangled minds, bodies and those simply not coming back. Those believing they can join the Navy to avoid Iraq are mistaken. Last, year the Navy augmented over 10,000 Sailors to support the “global war on terror,” many being sent to Iraq especially Hospital Corpsman and Religious Personnelman. I give my life within the ranks to them in hopes that we can end this conflict towards building a world where no one is sacrificed to enhance the lives and power of a few.