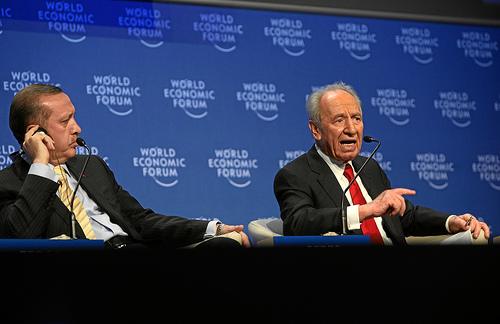 As the greatest beneficiary of the Arab Spring, Turkey is going head to head with both Syria and Israel.
By Richard Javad Heydarian | September 22, 2011 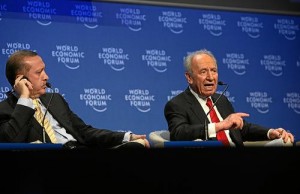 After consolidating its domestic political position with an impressive third straight victory in the 2011 parliamentary elections, the Justice and Development Party (AKP) is poised to cement Turkey’s status as the prime indigenous power in the Middle East. As mass protests rock most of the region, including Israel, Turkey is increasingly holding itself up as an example of economic dynamism and democratic stability.

The Arab Spring’s greatest beneficiary is neither Iran nor the United States nor Israel. Thanks to its creative foreign policy, burnished international image, and assertive political rhetoric, Turkey is arguably the biggest winner coming out of the Arab uprisings.

Turkey is not only a source of ideational inspiration for Arab revolts, but it is also becoming a concrete source of political support and socio-economic assistance. The United States and its European allies should acknowledge this as an encouraging sign of an emerging post-American order in the Middle East. After all, Turkey is proving to be both a responsible and effective status-quo power.

The greatest asset of Turkish foreign policy is its flexibility and consistency of message. Beneath this elaborate policy architecture, Ankara benefits from a very deep and incisive understanding of regional politics.

Turkey is known for its quasi-mercantilist foreign economic policy, using its positive political relations as a springboard for expanding its export-and-investment markets in the region. Turkey is also credited for having the region’s best private sector and most diversified economy. No wonder, then, that Turkish companies – with tacit and pro-active state support – have deepened their market penetration across the Middle East.

Yet, despite growing economic relations with Arab autocrats in the region, Ankara judiciously and meticulously re-calibrated its political approach once mass protests electrified the Arab street from Benghazi to Cairo. Among all major powers, regional and international, Turkey stands out for its ability to develop a coherent and nuanced policy approach in light of rapidly changing facts on the ground.

Starting with the Jasmine Revolution, Turkey began to condemn violent crackdowns and encourage leaders to listen to the voice of the people. When Turkish Prime Minister RecepTayyip Erdogan called for Tunisian and Egyptian autocrats to stepdown and pave the way for democratic politics, he buttressed Turkey’s moral ascendancy and regional popularity. Ankara explicitly welcomed the strongly secular, populist, and even liberal character of the popular uprisings, setting itself apart from other regional powers. This, coupled with favorable domestic conditions, boosted Turkey’s position in the Arab world.

The true test of Ankara’s resolve came with Libyan and Syrian uprisings. Given Turkey’s significant economic stakes and deep political engagement with those countries, the Arab street carefully watched Ankara’s moves. In Libya, despite huge investments of around $17 billion, mainly in the construction sector, Turkey gradually tilted in the direction of opposition forces. Despite its initial reluctance, Turkey eventually supported NATO-backed intervention in Libya, which sought to uphold the principles of Responsibility to Protect (R2P) and Protection of Civilians (PoC) by imposing a no-fly zone as Ghadhafi forces approached the doors of Benghazi. Over succeeding months, Turkey laid the foundation for the recognition of the Transitional National Council (TNC), while providing crucial humanitarian assistance to rebel forces.

When protests hit Syria, Turkey played a crucial role on two levels. Itprovidedmuch-needed humanitarian assistance to Syrian refugees, who flocked to southern Turkish towns. And it vigorously employedall diplomatic channels and political means to encourage a peaceful settlement to the ongoing Syrian political crisis. Turkey was arguably the only NATO member with leverage over Syria. Given the intimate and affectionate relationship between Prime Minister Erdogan and President Assad, Ankara sought to utilize its influence to pressure the Syrian regime to move in the direction of genuine reform, reconciliation, and dialogue.

Even while negotiating with the Syrian government, Turkey opened channels of communication with opposition forces,. Turkish cities served as the sites for events that gathered Syrian opposition forces across the ideological spectrum. This two-track approach revealed Turkish attempts to hedge its bets, preparing Ankara for any eventuality.

When Assad refused to de-escalate tensions, institute much-needed reform, and put an end to the crackdown, Turkish leaders began harshly to criticize the Syrian regime and join the international chorus of condemnation. By turning against an erstwhile ally, Turkey was able to project an image that underscored its consistent commitment to political reform in the Arab world. This was in stark contradiction to the inconsistencies that plagued the policy approach of other major powers, both inside and outsidethe region.

Turkey’s momentous resurgence is also a function of how it has managed its relations with other regional powers: Iran, Israel, and the Saudi-led Gulf Cooperation Council (GCC).

With respect to Iran, Turkey has adopted a very sophisticated and multi-layered approach. On the one hand, Ankarahas exponentially increased its commercial and economic interaction with Tehran, serving as a major energy market and source of investments. Turkey has also acted as a mediator in the stand-off with the West over Tehran’s nuclear program. In addition, Ankara has also served as a financial intermediary when sanctions affected Iran’s oil deal with countries such as India. Recently, Turkey and Iran have also coordinated their joint operations against Kurdish separatist groups in Iraq.

On the other hand, Turkey has shown little reticence in pushing its own political agenda, even if it negatively affected bilateral relations with Iran. For instance, Turkey has agreed to the installation of a NATO missile defense shield system on its soil. In response, Tehran has protested this move, arguing that the shield potentially minimizes Iran’s ‘ballistic-missile deterrence capability’in light of ongoing military threats against the Islamic regime. Moreover, Turkey ‘s much more critical and aggressive stance toward Syria did not sit well with Iranians, who treat the Syrian regime as a vital ally.

Interestingly, Turkey has cautiously approached the ongoing popular protests in the Persian Gulf and the Arabian Peninsula. While Tehran further risked its relations with GCC members by its tacit support of democratic protests in Bahrain and Yemen, Ankara has been largely silent on the issue. Given the sensitivity of the situation, forboth Saudi Arabia and the United States, Turkey has seemingly accepted the GCC’s jurisdiction and strategic prerogative over protests in the Persian Gulf sub-region. As a result, Turkey has maintained good relations with both the GCC and theUnited States, avoiding a strategic overstretch that could potentially backfire. This seeming inconsistency has so far escaped the public opinion, given how major media installation – including AlJazeera – have adopted a very cautious and low-key coverage of protests in countries such as Bahrain.

Turkey’s secular background has also helped it circumvent sectarian issues, which have colored ongoing protests. Since it has strong relations with both Shia and Sunni countries, Turkeycan credibly claim that its foreign policy lacks sectarian biases.

Beyond Turkey’s overall political resurgence, what made Erdogan an immensely popular figure in the Arab world is his uncompromising confrontation with Israeli leaders over the Palestinian issue. The murder of nine Turkish citizens during the Mavi Marmara incident set off a chain of reactions that has transformed Turkey into a major critic of Israel. Turkey has not only criticized Israel for its siege of Gaza, but it has also demanded a clear statement of apology for the death of Turkish citizens.

In response to Israel’s refusal to apologize, Turkey, recently, downgraded its bilateral diplomatic relations and threatened to cancel all military and trade relations. Moreover, Turkey has expressed its support for Palestinian Authority’s bid for statehood at the UN. As a member of the NATO, a candidate for European Union membership, and a long-term strategic partner of Israel, Turkey has executed an about-face that has boosted its reputation in the Arab world.

The Turkish government has instructed its navy to “escort” future humanitarian flotilla to Gaza, setting up the possibility for a small-scale military confrontation with Israel. In an interview with Al Jazeera Television, Prime Minister Erdogan said, “From now on, we will not let these ships be attacked by Israel, as happened with the Freedom Flotilla.” Moreover, Turkey has indicated its plan to take Israel to the International Court of Justice over the Gaza blockade.

All Roads Lead to Ankara

Recent polls conducted among Arab countries have indicated very positive views vis-à-vis Turkey. According to surveys conducted by the Turkish Economic and Social Studies Foundation (TESEV) and the Arab American Institute in Washington, Arabs do not only consider Turkey a model nation, both in economic and political terms, but they also see Turkey as a genuine regional power committed to democratic values and political reform across the Arab world. Moreover, Ankara is also deepening its regional influence by establishing strong ties with post-autocratic emergent regimes in Egypt, Libya, and Tunisia.

Perhaps the greatest indication of Turkey’s rise as the region’s preeminent power is Prime Minister Erdogan’s planned trip to Arab countries, which have experienced democratic upheavals in recent months. The Turkish leader is expected to underscore his country’s support for democratic movements across the Arab world, while encouraging Arab regimes to engage in democratic reform. Accompanied by an army of top businessmen and commercial dealers, Erdogan is also expected to cement Turkey’s economic presence in the post-revolutionary reconstruction and recovery phase. Blessed with ideational charm and a potent commercial muscle, Turkey is in a strong position to carve out aplace at the center of Middle Eastern affairs.

Turkey’s renewed resurgence, in light of the Arab spring, should not alarm the United States and other great powers. Although Turkey’s growing independence is beginning to rattle some Western policy-makers, who are critical of AKP’s Islamist credentials and anti-Zionist rhetoric, Washington should recognize that Ankara is indispensable to regional peace and security.

Turkey is already a mediator in the Iran-West nuclear standoff even as it supported the installation of the missile defense shield by its NATO allies. Turkey has played a crucial role in NATO operations in Libya and it provided necessary assistance to the TNC and other post-autocratic regimes. Given Turkey’s growing influence and burgeoning commercial-technological capabilities, the country could play a crucial role in reconstructing post-revolutionary Arab states, while pressuring other Arab countries to institute necessary reforms.

Turkey’s own democratic credentials, despite some serious lingering concerns, makes the country a beacon of inspiration for a more stable and democratic Arab political landscape. The United States has every reason to support Turkey’s rise as the region’s preeminent power. In this way, Washington could inspire other regional powers to follow suit and act responsibly in accordance with international norms and the spirit of the times.