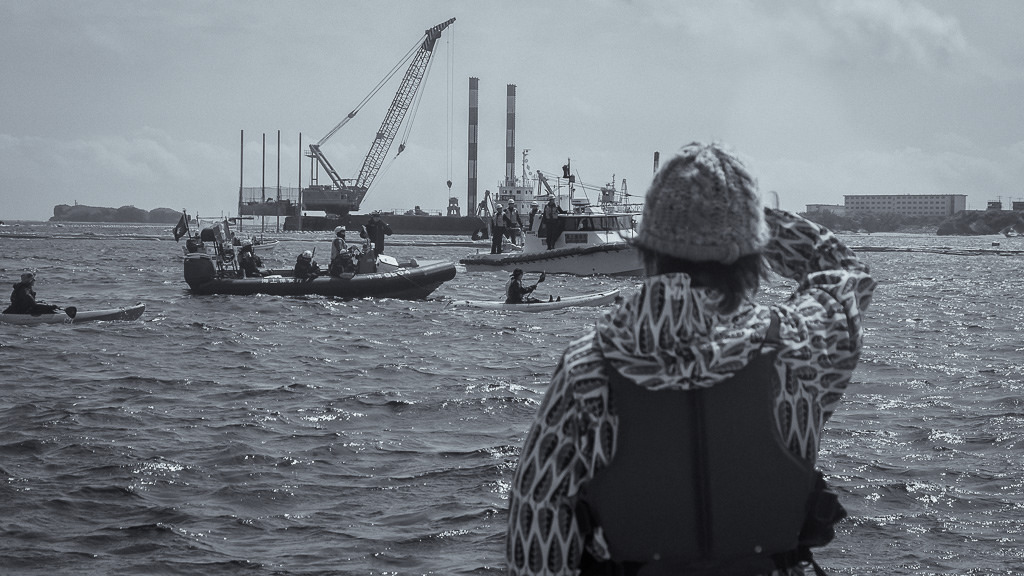 As the Standoff in Okinawa Continues, the U.S. Should Be Embarrassed

Washington and Tokyo remain committed to growing the U.S. military footprint on the island of Okinawa — whether Okinawans like it or not.
By John Aleksandr Melendez | October 12, 2015

This summer, Okinawans took to the water in kayaks to face down warships in their protest over the construction of a new U.S. military base in Henoko.

This image perfectly illustrates the ongoing struggle over the base, which involves the Okinawan provincial authorities, the Japanese mainland government, and the United States. It’s a David-and-Goliath struggle so darkly absurd it could have been lifted from a Haruki Murakami novel.

On the face of it, this conflict seems like just another local face of aggressive American foreign policy — which it is, in part. But it’s also the result of tensions already present between Okinawa and mainland Japan, as well as a personality clash between Okinawa governor Takeshi Onaga and Japanese president Shinzo Abe.

Onaga, who’s promised to “stop that new base construction using every possible and (legitimate) means,” is expected to issue an order to stop its construction. But he hasn’t yet reversed his predecessor Hirokazu Nakaima’s decision — issued in a final gesture after being voted out of office — to sign off on a permit allowing construction on the bay.

Abe, meanwhile, is pushing full speed ahead on his larger goal of creating a more muscular foreign and military policy for Japan. The Japanese Diet recently flew into an uproar as a small bloc attempted to delay the enactment of two bills that expanded the offensive missions that the country’s Self-Defense Forces can conduct. The bills did pass, but the backlash is potent. The bills face low approval ratings from Japanese citizens at home, while abroad the bills are regarded as a decided shift away from Japan’s postwar pacifism.

Reshaping the U.S. military footprint in Okinawa — over the objections of the Okinawans — is another important part of Abe’s plan.

Elected in a landslide on an aggressively anti-base platform, Governor Takeshi Onaga has fought for what he calls “all-Okinawa” politics, consistently putting the good of the island first.

He’s stood strongly against the Henoko base, seeking support abroad and actively locking horns with the mainland authorities, including with Abe himself. Abe’s response has been disheartening though unsurprising: He admonishes Onaga and ignores his decrees. In recent months Abe has taken the preliminary steps of dropping cement pillars on the seafloor and destroying rare ocean coral.

Yet some of Onaga’s supporters have been disheartened by the slow pace of Onaga’s resistance, even while the mainland government is exerting enormous political pressure. According to Satoko Norimatsu, director of the Peace Philosophy Center in Vancouver and coauthor of the book Resistant Islands: Okinawa Confronts Japan and the U.S., “There was an expectation that he would nullify or revoke Nakaima’s permit as soon as he became governor,” but almost a year has passed since then.

Still, Onaga carries the mantle of Okinawa’s anti-base movement. He’s recently reaffirmed his permit plans and recently addressed the UN human rights panel in Geneva on the subject. “Our right to self-determination and human rights have been neglected,” he declared passionately. “Can a country serve values such as freedom, equality, human rights, and democracy with other nations when that country cannot guarantee those values for its own people?”

The new base construction has moved forward over the last year largely because of the efforts of Shinzo Abe.

A member of the Liberal Democratic Party, Japan’s conservative party, Abe is a strong-arm, right-wing figure who has a broad “vision” for Japan’s future that combines elements of its traditional past with a massive uptick in its military strength. To achieve this, Abe has aligned with the United States, believing that Washington’s support will help Tokyo push past the limits imposed on the size of its military in the aftermath World War II and help face down a growing China.

Abe didn’t come up with the Henoko base option himself. Rather, it’s the result of years of negotiations between Tokyo and the United States. But the base, Norimatsu points out, will “fit nicely into Abe’s plan to remove all Article 9 restrictions to be engaged in U.S. wars around the world anytime and anywhere.” Furthermore, it underscores Abe’s plans for a military revival of Japan: “Exercise of Japan’s collective self-defense right,” she explains — that is, to allow Japan’s troops to participate in “collective” military operations in supposed defense of its allies — “will allow the U.S. to fully utilize the Japanese military as their own (at Japan’s expense) and allow Abe to achieve his life-long dream of making Japan ‘depart from the post-war regime.’”

With the passage of these security bills, which allow Japan to send its troops abroad for the first time since World War II, the pieces of Abe’s jigsaw puzzle seem to be coming together neatly.

The United States has its own reasons to build the new base in Okinawa.

The U.S. military considers its controversial Marine Air Force Base at Futenma obsolete, in part because it’s uncomfortably nestled in the metropolitan heart of Ginowan, one of Okinawa’s larger cities — a fact that’s made the base a subject of considerable local protest. The proposed facility at Henoko is intended as a replacement. The Henoko base would be larger and located on a biodiverse stretch of water known as Oura Bay.

The plan for Okinawa is a smaller part of the vaguely defined and ill-conceived “Pacific Pivot,” which involves a gradual shift of U.S. military power from the Middle East into the Pacific.

Washington’s reaction to Okinawan resistance has been mixed. Senator John McCain (R-AZ) has reversed his formerly anti-base stance and now supports the new base construction. U.S. Ambassador to Japan Caroline Kennedy, according to a U.S. State Department statement, offered a standard U.S. government line in a meeting with Governor Onaga. She “reiterated that the plan to expand Camp Schwab avoids the continued use of Marine Corps Air Station (MCAS) Futenma and is the only solution that addressed operational, political, financial, and strategic concerns.”

Onaga tried to remain upbeat about the meeting. According to one account, he told reporters “that he felt the ambassador was willing to work with him, but added that she spoke like she was reading a memo about the U.S. government’s stance on the relocation plan.”

President Obama has been rather cagey about the whole affair, throwing his weight behind Abe but making little public comment on the matter. The range of U.S. commentary in the mainstream media runs from tentative support of the base to being vaguely apologetic about it.

The history of U.S. base activities in Japan is complicated. The United States actually offered to pull out of Futenma after a U.S. soldier raped a Japanese schoolgirl in 1997. But the Japanese refused the offer at the time, still wanting the U.S. military presence for the same reasons Abe wants it now. Although the mainland benefits from the U.S. support gained in exchange for base operation and Okinawa receives some economic subsidies from Tokyo to sweeten the pill, the Okinawans must live with the bases and their risks. Tiny Okinawa hosts 74 percent of the U.S. military bases in Japan.

From Okinawa’s reversion to mainland rule in 1972 to 2011, 522 safety incidents have occurred — including plane and helicopter crashes, emergency landings, and otherwise — resulting in 34 casualties and 24 missing persons. One particularly grisly incident occurred before reversion in 1959, when a U.S. military aircraft crash at Miyamori Elementary School in Ishikawa resulted in the deaths of 18 students.

This fear is not purely historical: Another crash occurred on August 12, injuring seven people just as talks began between the politicians of the mainland and Okinawa prefecture.

The proposed construction of V22 Osprey launching pads at Henoko is akin to rubbing salt in an already tender wound. The Osprey aircraft, nicknamed the “the Widowmaker,” is part helicopter, part airplane, and notorious for its poor construction and tendency to crash. Since 2006, 31 Osprey crash incidents have taken place, and Okinawans worry about what will happen if more of these accident-prone aircraft come to the island.

Meanwhile, anti-base protests have been met with active suppression and violence. Those kayakers and canoeists were intimidated by police, and local reporters for the Okinawa news organization Ryukyu Shimpo were “manhandled, abused, and forcibly removed” from the site of the protest. In addition, other protesters camping out on the bay have reported that the Japanese government moved their tents and (even more disturbingly) that they were dragged away by U.S. army personnel.

Another rallying point for the Okinawans’ anti-base sentiments is environmentalism. The projected base plans have potentially disastrous consequences for Oura Bay’s ecosystem. Home to rare coral and other endangered marine life, Oura Bay is the natural habitat of the dugong, a manatee-like saltwater mammal that is critically endangered. According to a wide range of scientists, conservationists, and politicians, the current Futenma replacement plan would put the dugong in further peril.

American politicians have insisted that the Henoko base is the “only solution” and the “best option.” Refusing to hear otherwise has been their strategy thus far, even in the face of a visiting Okinawan delegation. It doesn’t look good that Washington, which supposedly promotes democracy throughout the world, is actively trying to silence the genuine, unified voice of a people who are practicing self-determination by resisting unwanted interference from outside and above.