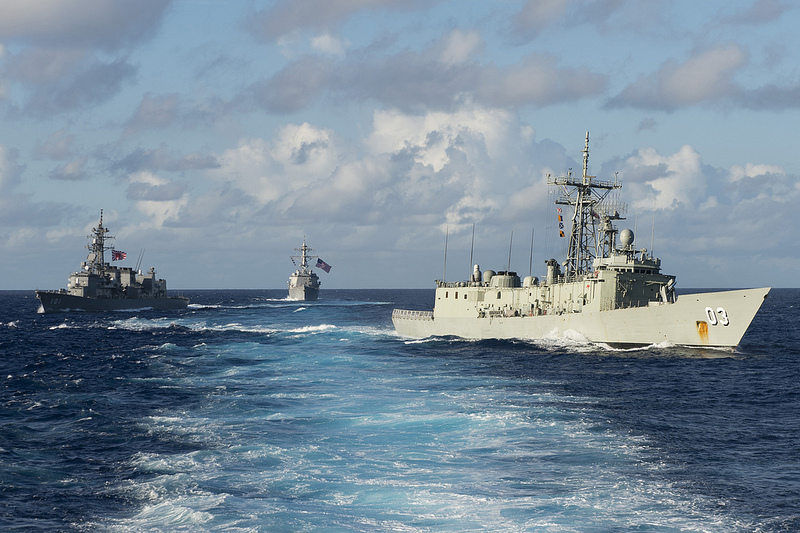 The Obama administration's "Pacific Pivot" will make it more difficult than ever for countries of the region to stay neutral in an emerging rivalry between the United States and China. (Photo: U.S. Navy / Flickr)

Asia: The Elephant vs. the Shark

The Obama administration's nebulous "Pacific Pivot" is setting the stage for a superpower conflict in East Asia.
By Lawrence Wilkerson | March 20, 2014

To pivot, according to the venerable Oxford English Dictionary, means “to turn as on a pivot.” Which takes us to the noun, which seems more appropriate for describing the Obama administration’s Pacific policy: “That on which anything turns; a cardinal or central point.”

The problem, however, is that finding a cardinal or a central point in the administration’s Pacific policy is extremely difficult. What is clear is only a verb tense. The United States is turning from more than a decade of war—ineffective and costly—in western Asia to a more important and strategic region, eastern Asia, plus the waters that approach it. Perhaps the central point of the pivot is Asia, and the United States is switching from one end to the other. The “Pacific,” however, suggests a broader turn, although new allies and commitments in the Indian Ocean seem to balance if not outweigh those in the Pacific Ocean. India is the most potent example, a country located more or less at a central point.

If geographical and policy clarity is lacking, so is clarity around security, and in particular military security. Muddling matters more, U.S. Secretary of Defense Chuck Hagel on February 25 outlined a resource approach that implied that China is the number one challenge for the United States, therefore land forces will subsidize sea and air forces. Yet the budget shares for each service so far do not deviate greatly from historical norms. What Hagel really seemed to be saying to Congress was: “Sequestration is bad; I am telling you how bad; now back off, or I might do it.” As to what all this would mean to “the Pivot”—noun or verb—remains a mystery other than the focus on China. That same focus on China appears to be the point of the Trans-Pacific Partnership Pact, a free trade pact designed to exclude Beijing. But it is stuck in congressional limbo, like everything else these days.

Meanwhile, in the region, Japan is being led by a Liberal Democratic Party Luddite, South Korea is holding Japan at arm’s length, North Korea is acting its usual pugnacious self with its nukes, China’s military is asserting its influence in Beijing, all of Southeast Asia is mystified by the “Pivot” with Thailand looking increasingly like Nigeria, Australia is puzzled, and New Zealand is hanging on. Not even an individual as profit-motivated as Richard Armitage can convince the players that they should just “trust the United States.” The implication, as always with Armitage Associates, is that when the Republicans get back in the White House, all will change for the better. But of course it won’t, and increasingly the Pacific countries know it.

So, where is U.S. Pacific policy headed? If we are not careful the trajectory heads straight back to 1935. It won’t be isolationism—a nebulous term in any event that is often used to cover lazy analysis—but a set-up for catastrophic events to come. A short exercise illustrates the point.

At the top of a letter-sized piece of paper, write “China” and “United States” and beneath those words the allies of each country. Next, put down all the other countries of the region, using India as the pivot point and including all countries to its east. Most countries will fall into this non-aligned group. Even several countries bound by security treaty to the United States, such as the Philippines, will want to be there. Also list Russia, Turkey, and Iran because they too are in Asia, are important to Asia’s future, and are discounted only by fools.

If we are schooled in the military arts, we immediately see from this exercise the prospect of conflict on a massive scale. Countries will side with the great power most able to compel them to do so or risk being swallowed up. At the climax of this awesome conflict, the massive land power will confront the formidable sea power. It will be an epic contest between the elephant and the shark. The shark cannot come ashore, and the elephant cannot go to sea. Their attempt to grapple with one another will create a sheer hell for everyone within proximity.

Ultimately, as in every war game in which I have participated that played this scenario, each side will turn to nuclear weapons as the only potentially decisive device left in its arsenal. This resort to the nuclear option will occur after all the economic and cyber warfare, satellite-killer missions, area denial, air-sea battle, and other tools of power have been utterly exhausted.

Is there an alternative future? Yes. Come to the Asia Institute and FPIF’s panel on Asia security on March 26, and I will describe at least one.

Lawrence Wilkerson was Secretary of State Colin Powell’s chief of staff as well as associate director of the State Department’s Policy Planning staff, where he was responsible for East Asia and the Pacific. Before serving at the State Department, Wilkerson served 31 years in the U.S. Army. He is a contributor to Foreign Policy In Focus.