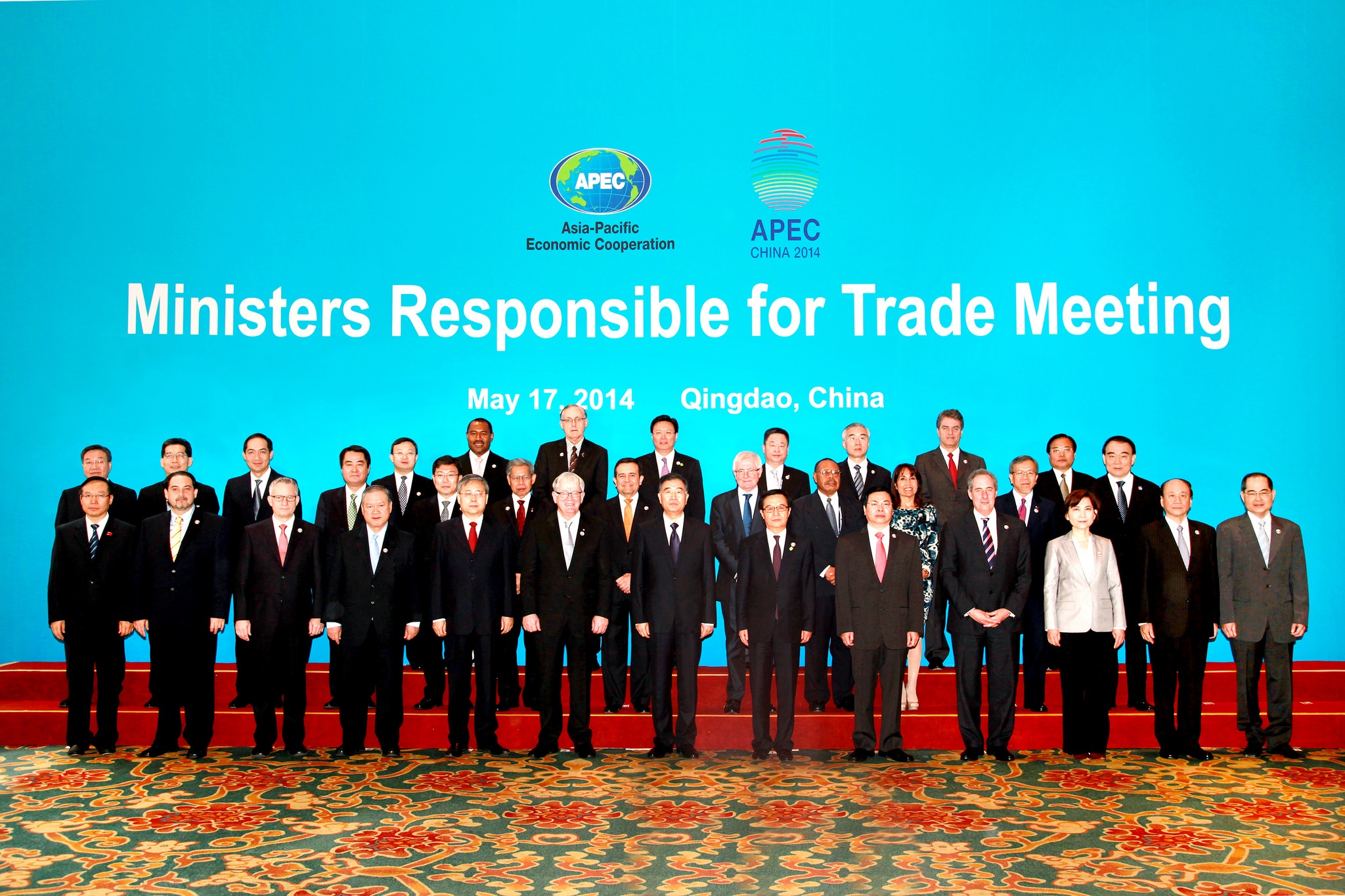 Asia Smiles for the Cameras

Today, Asia is like the Kardashian clan: wealthy, contentious, and all up in the public’s face.
By John Feffer | November 19, 2014

It wasn’t long ago that certain pundits were predicting war in Asia.

Back in the spring, the conflict over the South China Sea was heating up as China sparred with Vietnam over an oil exploration rig and with the Philippines over disputed reefs. Japan and China, meanwhile, were butting heads over a string of uninhabited rocks in the ocean between them. South Korea and Japan, both U.S. allies, were refusing to talk to one another over a range of issues that stretched back into the past. And the United States was pushing its “Pacific pivot,” which Beijing translated into Chinese as “containment with American characteristics.”

The Pacific was anything but pacific. Everyone was preparing for war by jacking up their military spending. It looked as though Asia was heading toward its own version of 1914, which even Japanese Prime Minister Shinzo Abe worried about publicly.

But the guns of August, at least this time around, failed to fire. And last week, at the Asia-Pacific Economic Cooperation (APEC) meeting in Beijing, everyone was suddenly making nice. The leaders of Japan and China shook hands. China offered to build up the infrastructure of its neighbors through a huge new “Silk Road” initiative. Shinzo Abe and South Korean President Park Geun-Hye broke bread at dinner and promised to push forward bilateral talks. The United States and China agreed to notify each other of military exercises in the Asia-Pacific region.

Oh, yes, and Washington and Beijing hammered out a climate deal that received all the headlines. But as I write in The Dance of the Superpowers, global cooperation between the United States and China has been forthcoming on a range of issues. It’s the regional standoff between the two superpowers that is so worrisome. This isn’t your grandfather’s Cold War. Although the United States and Soviet Union managed very little in the way of global cooperation, they largely respected each other’s sphere of influence. The United States and China, by contrast, are squabbling over who gets to call the shots in Asia. As a result, the region has become like the Kardashian clan: wealthy, contentious, and all up in the public’s face.

Wealthy is the operative word here. APEC, after all, is all about the money, and it seemed as though capital acted like smelling salts to bring the Asia-Pacific leaders to their senses. The meeting brings together the world’s top three economies (China, the United States, and Japan) along with six more from the top 20 (Russia, Canada, Mexico, Australia, South Korea, Indonesia). Altogether, APEC represents more than half of the world’s GDP and nearly half of its trade. All of that economic power in one place no doubt motivated the participating leaders to focus on their interests rather than passions, just as global trade under capitalism is supposed to operate.

Economic warning signs no doubt also stimulated the pheromones that produced the APEC lovefest. Japan is officially in recession mode as its economy has shrunk in two successive quarters. Growth is slowing in Indonesia, Australia, and Thailand. The economies in Taiwan and South Korea are growing modestly, but both countries are worried about regional stagnation. Although most countries would envy China’s current economic growth – over 7 percent – the days of double-digit expansion are in the past. The EU offers a gloomy scenario of a region in stagnation. So it’s not surprising that the APEC countries decided to get down to business.

At the meeting in Beijing, South Korea and China signed a free-trade agreement. The United States tried to gin up enthusiasm for its Trans Pacific Partnership, and China countered with its own Free Trade Area of the Asia Pacific. In their eagerness to promote free trade, you might forget that all of the countries in the region – including the United States – have their own sectors that they desperately want to protect (Japan’s agriculture, America’s car industry, China’s underperforming state enterprises). But with stimulus spending still in the ideological doghouse in most parts of the world, battering down other countries’ trade barriers remains the go-to option for economic revival.

So, do the make-nice efforts at APEC mean that peace has broken out in Asia? Before you book your cruise around the South China Sea, let’s step back and see if the promise of economic growth has truly done away with all the conflicts in the region.

First off, despite a climate deal, an early-warning agreement, and some friendly exchanges in Beijing, Xi Jinping and Barack Obama have not put aside their disputes in Asia. Both sides are bolstering their military positions in the region. Although the “Pacific pivot” does not translate into significant U.S. force increases in the region, Washington is upgrading the capabilities of its friends and allies. In the latest deal, the United States will be selling South Korea more than a billion dollars worth of PAC-3 interceptor missiles. Japan, with the strong support of the United States, is stepping away from its “peace constitution.” At the recent G-20 meeting in Brisbane, Obama pushed harder for closer cooperation with Japan and Australia. Even Malaysia, which has enjoyed relatively good relations with China, recently invited the United States to fly surveillance planes out of the country’s eastern region.

Not everything about Washington’s pivot, however, is going as planned. The winner of the gubernatorial elections in Okinawa this week, Takeshi Onaga, opposes the construction of a new U.S. Marine Air Force base to replace the aging Futenma facility. Although Tokyo forced his predecessor to change his position and grant a permit for new construction, it will be considerably more difficult to proceed with the plan now that the Okinawan political establishment at all levels opposes it. Since the Futenma relocation is the centerpiece of the Obama administration’s force restructuring in the region, the pivot may soon no longer have a leg to stand on.

China, though it continues to push ahead with double-digit military expenditure increases, has witnessed the tarnishing of its “Peaceful Rise” brand through its more aggressive actions. It’s no surprise, then, that it has decided to focus more on economic incentives. Its Silk Road plan to upgrade the regional infrastructure includes countries like the Philippines, which is currently challenging China’s South China Sea claims in international court. Its regional free trade scheme has already won the endorsement of South Korea.

China’s biggest gambit may well be the new bank it’s putting together with its BRICS partners in Brazil, Russia, India, and South Africa. China has been pushing its own version of development – a “Beijing consensus” heavy on state involvement in the economy and light on democracy or transparency – and now it has an international financial institution to back it up. Here is China’s most deliberate challenge of U.S. authority. A frontal assault on the Pentagon would be suicidal. The attempt to get more voting power in the IMF and World Bank is currently stalled in Congress. But an end run around U.S. economic hegemony – and the status of the dollar as global currency – is a long-term strategy torn from the pages of Sun Tzu.

Still, money won’t make the security problems in East Asia disappear. The region seems to have a high tolerance for both trade and tribulation. The heads of the region – Abe, Xi, Park – have all stimulated nationalist passions in their countries, and they believe that they ignore these passions at their political peril. South Koreans, however much they like sushi or Tokyo boy bands, treat Japan with as much fear and loathing as they do North Korea. Japanese views of China have reached the worst levels in ten years, and Chinese views of Japan are not much better. These views have worsened even as trade among the countries has increased. As the country that subjugated the region for much of the 20th century, Japan must take the lead in reconciliation. The region awaits a truly visionary Japanese leader who can, once and for all, solve the “history problem” – as Willy Brandt did in Germany – and leverage the resulting regional good will to pull Japan out of its long economic slumber.

But Washington, too, has a major role to play. The United States has traditionally presented itself as the guarantor of peace and stability in the Asia-Pacific region. The island disputes, history spats, and clashing nationalisms would all be a great deal worse, the Pentagon asserts, without the presence of U.S. military bases, the Pacific fleet, and close security alliances. It’s certainly true that the animosities in the region have roots that precede U.S. military presence (though the United States didn’t help matters, for instance, when it seized the Philippines and gave the seal of approval to Japan’s colonization of Korea way back in 1905).

But Washington needs to recognize that its Pacific pivot is adding insecurity to the region, not stability. With its arms sales and encouragement of ally assertiveness, the United States is bringing peace to the region just like the Colt .45 “Peacemaker” brought peace to the Wild West.

The APEC summit offered an important respite from the brewing conflicts in the region. The Okinawan election delivered an important message that, despite all manner of carrots and sticks from Washington and Tokyo, the people in Japan’s southernmost prefecture don’t want any part of the Pentagon’s rebalancing. The lesson should be clear. Peace doesn’t come from the barrel of a gun. China is offering Silk Road 2.0. What is Washington’s counter-offer?