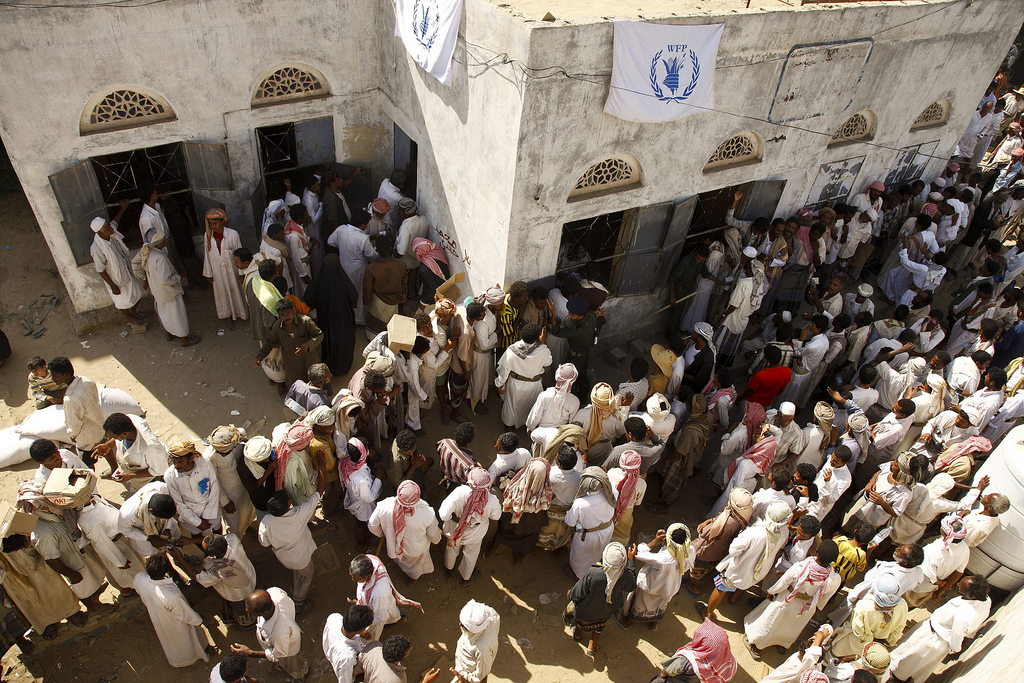 The Yemen war is a variation on an old theme, where despotic regimes in the Middle East call on the United States to do their dirty work.
By Adil E. Shamoo | April 7, 2015

The latest war in the Middle East is now well underway in Yemen, where airstrikes by a Saudi-led coalition have killed hundreds and plunged the Arab world’s poorest country into a deepening humanitarian crisis.

The target of the strikes are Yemen’s Houthi rebels, Zaydi Shiite resistance fighters that seized the capital Sanaa last January and have made inroads in southern Yemen since. Other members of the 10-country coalition include Egypt, Sudan, Pakistan, and most of the Gulf Cooperation Council of Sunni monarchies.

Washington has confirmed that it’s providing logistical support on the ground.

It’s a variation on an old theme, where autocratic and despotic regimes in the Middle East call on the United States to do their dirty work. The result for the United States helping these regimes to stay in power has been the prevalence of anti-Americanism among Arabs and Muslims.

Nonetheless, in addition to providing intelligence to the Saudis for their bombings in Yemen, the U.S. also just removed its partial weapons freeze on Egypt’s military regime — a signal of approval of Cairo’s leadership in the anti-Houthi fight.

The members of the coalition allege that the Houthis are proxies for Tehran. By roping in Washington, the Saudis (like the Israelis) may be trying to forestall the U.S. rapprochement with Iran after the recent breakthrough in nuclear talks and tacit cooperation between the two countries against the Islamic State in Iraq.

Media reports have largely echoed the charge that the Houthis are Iranian proxies. Yet this misleading cliché serves no other interest than to demonize Iran.

Though it’s likely that Tehran is helping the Houthis in some capacity, scholars on Yemen have been unable to gather much credible evidence of Iran’s military involvement. Even Katherine Zimmerman, a policy wonk at the right-wing American Enterprise Institute, told Foreign Policy there was “nothing that’s seen as hard evidence” to indicate Iranian involvement.

More likely, the driving forces of the rebellion are local, as a Chatham House report by Peter Salisbury recently indicated, concluding that the influence of external forces is exaggerated. “The Houthi are not Iranian proxies in the sense that Hezbollah is an Iranian proxy,” adds British foreign secretary Philip Hammond. Even if Iran is supplying help, Tehran “can’t actually control what the Houthis do.”

Of course, the U.S. is over 7,000 miles away, yet it flies drones, runs special ops, and facilitates Saudi bombing raids in Yemen. Can it really treat alleged Iranian involvement from next door with much disdain?

Despite some of their more strident rhetoric, the Houthis appear much more moderate in their aims — namely, representation and resources for their Zaydi Shiite constituency — than they’re credited with by the West. They’re also staunch opponents of al-Qaeda in the Arabian Peninsula (AQAP), the al-Qaeda franchise most feared by Western intelligence agencies, and of the Islamic State, which has allegedly established a foothold in Yemen.

But outside these Sunni extremist forces, the conflict in Yemen isn’t so much about sectarian affiliation as it is access to resources.

Home to 25 million people, Yemen is one of the poorest countries in the world despite the recent discovery of oil there. Resources have historically been scarce and wealth is concentrated among the few in power.

In the late 1960s, Yemen went through two simultaneous revolutions — one in the north and one in the south. A new Yemen Arab Republic was declared in the north along the Saudi border and enjoyed good relations with the Saudis. In the south, a new Peoples Democratic Republic of Yemen was declared. A socialist country, it enjoyed the patronage of the Soviet Union and favorable relations with Tehran.

In 1990, the two countries merged into a unified country under the leadership of Ali Abdullah Saleh as a president. Yes, that’s the same Saleh who became a cooperative client of the United States.

Saleh became increasingly corrupt and autocratic, concentrating power in the hands of his family before he was finally deposed in 2012. In the meantime, AQAP thrived in Yemen, opening the door to later inroads by ISIS. Both AQAP and ISIS are sworn enemies of the Shiite Houthis. Recently, suicide bombers allegedly linked to ISIS killed and wounded hundreds of Shiite worshipers.

The Houthis backed the uprising that overthrew Saleh from the presidency in 2012. But in the current Houthi revolt, Saleh — a secular Zaydi Shiite who retains some supporters in the Yemeni army — has supported them in the hope of re-installing himself or his son to power. He’s calling for new elections, since the pact that ousted him and installed his

vice president, Abdu Rabbu Mansour Hadi, as the country’s leader was only intended to be transitional.

With the Houthis continuing to make gains around the southern port city of Aden despite the airstrikes, the Saudis’ bombing alone will not likely not be enough to tip the battle. More ominous is the prospect of a ground intervention, particularly as Sunni Arab countries contemplate forming an “Arab NATO” alliance to enforce the region’s status quo.

However, the Houthis and their allies are battle-hardened and know the terrain — this is their mountainous country, after all. The war could then degrade into guerilla warfare with no end in sight. With their chief rival for power tied up, al-Qaeda and ISIS will thrive further. Even now, AQAP is exploiting the chaos.

The Egyptian-Saudi armada to topple the Houthis and their allies could result in Iran deepening its own suspected involvement in the war. The involvement of so many countries in the region in the war in Yemen could result in a wider war with completely unpredictable outcomes, even outside the country’s borders.

The Saudis and the Egyptians are particularly vulnerable to internal and external serious rebellions. The Saudis military may not stay loyal to the regime if the war with Yemen drags on. The restive Shia population in eastern Saudi Arabia may rebel. The majority Shia in Bahrain could rise up again against the Bahraini government, as well as against the Saudi military forces stationed there. The Egyptians are at war from within already and the new war will just inflame it further.

The silver lining is the emerging U.S. rapprochement with Iran, which could tilt control of the narrative away from Israel and the Sunni countries and form the basis for a mediated settlement — but only if the recent nuclear agreement survives an assault from Netanyahu and congressional hardliners.