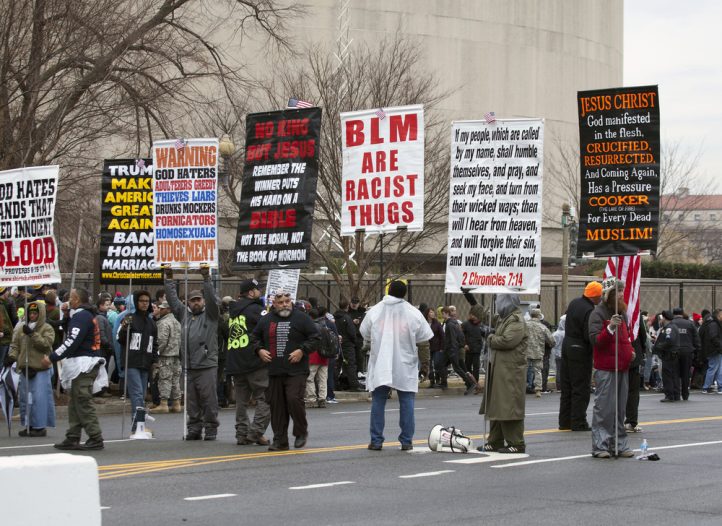 He and his wife have made sure to alert the press on the few times he does attend services, for instance on Christmas and St. Patrick’s Day. Otherwise, the president seems to worship regularly only at the Church of the Hole in One. Since inauguration, he has made 165 visits (and counting) to golf courses, often on Sundays.

Trump is like a secular Elmer Gantry, the hot-blooded preacher of Sinclair Lewis’s eponymous 1927 bestseller. Gantry preaches on Sundays about the heavenly virtues even as he drinks, commits adultery, and breaks one commandment after another on every other day of the week. Trump, meanwhile, has acted irreligiously all his life and only recently made any pretense to churchgoing piety. He confines his preaching to the political realm. In both cases, however, loyal congregations gather around these hypocrites, convinced that they are true representatives of God.

Trump a representative of God? During the 2016 presidential campaign, evangelical Christians voted in large numbers for Trump not because of his religious convictions but despite his lack of them. They viewed Trump as an imperfect vehicle for God’s will, which was presumably expressing itself about the composition of the Supreme Court, government funding for abortion, and the eroding wall between church and state.

Give us a virtuous president, the evangelicals trumpeted in true Augustinian fashion, but not yet. In the meantime, they would overlook the Republican candidate’s biblical illiteracy (“Two Corinthians”!) on top of his very public indiscretions with women, money, and gambling.

But in the two years since inauguration, Trump hasn’t just golfed. Even if he hasn’t been attending church regularly, he has invoked God more frequently. He has assiduously courted the evangelical vote by hammering away at abortion and supporting Bible literacy classes in public schools. He has signed bibles for the faithful. He now sounds much more like Elmer Gantry (on Sunday) rather than just acting like him (during the rest of the week).

Oh, but Trump has much greater aspirations in the religious realm. In the last two years, the president has achieved a kind of apotheosis, an elevation to divine status, and this transformation has important foreign policy implications.

On his recent trip to the Middle East, Secretary of State Mike Pompeo declared Donald Trump the possible savior of the Jewish people. Pompeo was responding to a prompt from the Christian Broadcasting Network, which compared the president to Esther, in the Old Testament, who persuaded the Persian king to spare the Jews.

Pompeo would have been on firmer ground if he had said that Trump was the possible savior of some Jews or, even more precisely, one Jew.

After all, Trump has gone all out to save the tuchis of Israeli Prime Minister Benjamin Netanyahu. Trump has gifted Bibi with the transfer of the U.S. embassy from Tel Aviv to Jerusalem, a withdrawal from the UN Human Rights Council to protest its allegedly anti-Israel bias, and various repudiations of Palestinian authority (closing the PLO’s DC office, suspending U.S. contributions to a UN agency helping Palestinian refugees).

Most recently, Trump recognized Israel’s annexation of the Golan Heights, a truly gratuitous gesture designed to boost Netanyahu’s stature before next week’s elections in Israel.

Pompeo isn’t the only one who’s declared Trump the anointed one. On election day, evangelical pastor Robert Jeffress proclaimed, “God declared that the people, not the pollsters, were going to choose the next president of the United States.” It’s extraordinary that God, who intervenes rather infrequently in human history, decided to do so on that day in November 2016 and, despite Jeffress’ assertion, did so not to side with the people or the pollsters but with the Electoral College, an institution so complicated that perhaps only divinities can understand its workings.

More recently, press secretary Sarah Sanders announced: “I think God calls all of us to fill different roles at different times and I think that he wanted Donald Trump to become president, and that’s why he’s there.” A quarter of the country agrees with Sanders. (These folks might consider staying away from the polls in 2020 to test their faith since God, more politically active all of the sudden, can presumably compensate for lower voter turnout if that’s what it takes.)

Trump, of course, doesn’t need other people’s praise to bolster his sense of self-worth. He’s long had an exaggerated understanding of his mission in life.

But these more recent claims of Trump’s role in the world, which have inflated to monstrous size, help explain the president’s growing fanaticism. He presides over the American political system like an extra-constitutional force. Indeed, he is becoming more like an ayatollah than an elected figure: a sign of divine will not civic choice.

This tearing down of the barrier between church and state, which Trump vowed to do as a candidate, has disturbing implications for the United States. As Susan Jacoby has written, “Trump administration officials have used fundamentalist biblical interpretations to support everything from environmental deregulation to tax cuts.” It has equally unsettling ramifications for foreign policy, as Trump’s lockstep support of Netanyahu demonstrates.

But the truly worrisome development is how Trump fits into a growing pattern worldwide: an informal axis of Christian fanatics determined to create their very own clash of civilizations.

Vladimir Putin, as a career former Communist, was never a particularly religious man. But as Russian president, Putin has cannily solicited the support of the Orthodox Church. He has stressed the importance of “family,” banned gay “propaganda,” and targeted the activities of religions other than the Orthodox Church.

More critically, he’s positioned Russia as a defender of traditional values against both liberals and adherents of other religions. This has made Russia a beacon of the Christian far right in Europe and the United States. Putin’s sheer opportunism forms the basis of his bond with that other great flip-flopper, Trump.

One of Putin’s greatest admirers in Europe is Viktor Orban, the prime minister of Hungary. On top of his preference for Putin’s brand of illiberalism, Orban speaks of the European imperative to defend against immigrants. He has presided over a change in the country’s constitution that makes it a fundamental duty of the state to protect Hungary’s Christian culture. This seventh amendment to the country’s Fundamental Law also stipulates that no foreigner from outside Europe can resettle in the country. And it bans homelessness to boot.

Wow, talk about Christian charity! Orban was also a prominent liberal 25 years ago. Beware the fervor of the convert.

The axis of ayatollahs — Christian extremists in positions of political power — extends from the ruling Law and Justice Party in Poland to Deputy Prime Minister Matteo Salvini of Italy’s far-right Northern League. In France, the National Rally party — the re-named National Front — hopes to take advantage of Prime Minister Emmanuel Macron’s dismal popularity ratings to gain a larger foothold in the upcoming European Parliament elections and then bring their brand of far-right Catholicism to power in Paris.

It’s not just Europe. In Brazil, for instance, Jair Bolsonaro said on the campaign trail: “God above everything. There is no such thing as a secular state. The state is Christian and the minority will have to change, if they can. The minorities will have to adapt to the position of the majority.” As president, Bolsonaro brought an evangelical minister to head the Ministry of Human Rights, Family, and Women and, on day one, shut down the government’s LGBT office. The leaders of Nicaragua and Colombia also wear their conservative Catholicism on their sleeves.

Fanaticism isn’t confined to Christianity. As if he weren’t already intolerant enough, Netanyahu has cultivated a political alliance with a party of Jewish extremism called Otzma Yehudit. You can find Hindu fanaticism in India and Buddhist fanaticism in Myanmar. Oh yes, and there’s also plenty of Islamic fundamentalism, the only form of religious extremism that merits regular media coverage.

Religious extremists tend to have an apocalyptic view of the world. They are fighting against evil. They are preparing for some new dispensation. Their fanaticism provides a rationale for committing sins otherwise proscribed by their religions: killing people, separating children from their families, imprisoning the supposedly impious. Their fanaticism allows them to interpret scripture in just such a way to justify their extreme acts. Most critically, fanatics are always girding their loins for an epic battle, for the stakes must rival the pretensions in scale.

Trump, too, has an apocalyptic view of the world: American carnage, international chaos. Only the president, in his infinite narcissism, can save the fallen world. But Trump is also a god of vengeance prepared to rain “fire and fury” down upon the unbelievers. His advisors clamor on behalf of a range of targets: Iran, North Korea, China.

In the last stage of its transformation from republic to empire, Rome witnessed the apotheosis of its emperor. Augustus declared Julius Caesar a god upon his death and in turn was declared one upon his own death as well.

As he presides over the deconstruction of American democracy, Trump is following a similar trajectory. He’s not content to be the (self-proclaimed) best president of all time. He doesn’t just want to be leader for life like China’s Xi Jinping.

Trump wants to be more than just a star on Hollywood Boulevard. He wants to be a star in the firmament. The crimes he commits on his way to achieving this heavenly goal will be of biblical proportions.