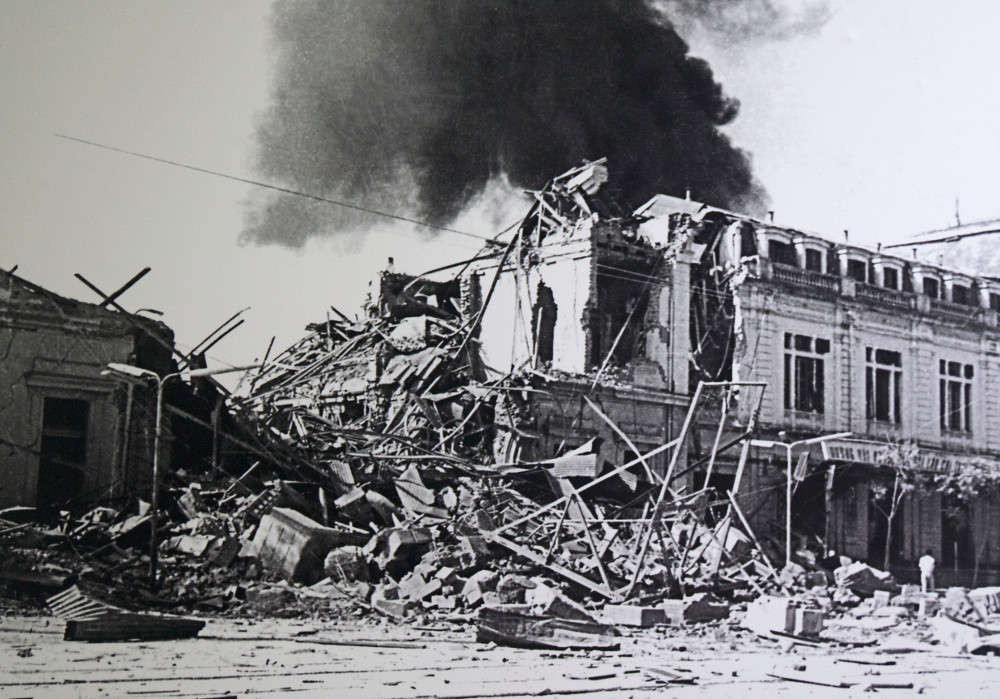 The B-52 is often touted as a game-changer, but it can't overcome a determined adversary.
By David Bacon | January 11, 2016

On the plane to Hanoi earlier this month, I opened my copy of The New York Times to find an article by Dave Philipps: “After 60 Years, B-52’s Still Dominate the U.S. Fleet.” The piece stuck with me for weeks as I traveled through north Vietnam, trying to unravel U.S. amnesia towards the people of this country and what they call “the American war.”

Philipps ends with a quote from a former South Vietnamese Navy officer, Phuoc Luong. “American technology is super,” he tells him. “It’s a great plane. In Vietnam we didn’t use it enough. That’s why we lost.”

If anyone knows the B-52, it’s the people of Hanoi. The enormous planes bombed them day and night for twelve days around Christmas in 1972. Today there’s a museum dedicated to the bomber, and the wreckage of one still sits in a small lake in the middle of the city.

When I tried to imagine what it was like living amid the constant deafening explosions, I found an earlier article in the archives of Philipps’ newspaper that gives an idea. It describes a visit by Telford Taylor, who’d been a judge at the Nuremberg war crimes trials, folksinger Joan Baez, and two other U.S. citizens in 1972. They’d gone to Hanoi that Christmas to deliver mail to pilots of those B-52s. Some had managed to survive being shot down while delivering President Nixon’s brutal holiday greeting, and then were apprehended by the people they’d been bombing.

The visitors described their fear in the midst of cataclysmic destruction, and their subsequent journey through the city and its ruins. “The most horrible scene that I’ve ever seen in my life was when we visited the residential area of Khan Thieu, and as far as I could see, everything was destroyed,” mourned Yale University Divinity School Associate Dean Michael Allen.

Thirty years later another Times writer, Laurence Zuckerman, also wrote about this iconic airplane: “The B-52’s Psychological Punch: The Enemy Knows You’re Serious.” Zuckerman was reacting to a documentary on the B-52s by filmmaker Harmut Bitomsky. Zuckerman’s piece was not exactly a paean to the aging airplane, but like Philipps, he couldn’t quite hide a certain admiration for its long life.

The B-52 was built originally in the early 1950s to drop nuclear bombs on the Soviet Union. Since then it has carried “conventional” bombs, releasing them over people and homes in dozens of other countries. “It is the longevity and versatility of the giant bomber, which started flying in 1952 and is expected to remain in service until 2037, that is so fascinating,” Zuckerman commented.

Although both writers carefully note that carpet bombing inspired massive protests both in the United States and internationally, what’s glaringly absent in their pieces is any sense of what it means to be under the B-52, on its receiving end.

The Christmas bombing of Vietnam was a war crime. No U.S. official was ever tried and punished for it, and it was as irrational as it was savage. The negotiations for the U.S. troop withdrawal from South Vietnam would reach a conclusion within a few weeks of it. Could some minute extraction of leverage in those talks have been worth the deaths of more than a thousand Vietnamese?

Throughout the eight years in which the U.S. bombed North Vietnam, its bombers had few military targets. One airman quoted by Philipps tried to claim that bombing nevertheless had some strategic value: “We’re doing a lot more than killing monkeys and making kindling wood out of the jungle,” he claimed. The B-52s targets, however, were people and the infrastructure that held their lives together. U.S. planes bombed dikes to try to cause flooding in Hanoi and the countryside. They bombed the Long Bien railroad bridge—the link that brought food and coal into Hanoi so that people could eat and keep warm.

The B-52s and their accompanying F-4s and F-14s bombed the small town of Sapa in the hills north of Hanoi, near the Chinese border. Sapa is a cultural center for many of Vietnam’s ethnic minorities. It has no military value. Why bomb it, if the purpose was not to terrorize people and extract revenge for their defiance?

At the Army Museum

Traveling through the north, I sometimes asked ordinary people—taxi drivers or restaurant workers—what I should see in Hanoi. Mostly they’d tell me to go to the Army Museum. One morning I did, and I could see why. On the ground outside the main halls are captured tanks, a Huey helicopter, and rows of bombs. In the courtyard, pieces of shot-down planes have been welded together into a tower, topped by the tail assembly of a U.S. jet.

Kids are climbing all over them. At the museum entrance sits an old MiG fighter the Vietnamese got from the Soviet Union. Parents send their children up a small ladder bolted to the side, and there they pose for iPhone pictures, next to the 14 red stars painted on the fuselage, each representing a U.S. plane it shot down.

It was a moment for conflicting feelings. I was glad to see the instruments of war surrounded by happy families. Then I thought about the pilot of the MiG. How terrifying it must have been to fly up into the anti-aircraft and missile fire above Hanoi and shoot at the B-52s and their phalanx of fighter escorts. And then I realized, it must have been terrifying for the U.S. pilots too. Eighty-four planes were shot down over Vietnam during the Christmas bombing, including 34 of the giant Stratofortresses, according to the museum.

Today’s remote controlled wars, with drones guided from computer screens in Colorado, seem antiseptic by comparison—for the pilots. Not so for those under the bombs. For people living in the ancient cities of Sana’a or Kunduz, the reality today is much as it was for people in Hanoi that Christmas.

Hanoi has long since been rebuilt. In the city and its environs, Vietnam is on a building binge, and the impact of the war is no longer so visible. Children born during the Christmas bombing are celebrating their 43rd birthdays.

People walk through the Army Museum exhibit halls lined with photographs showing all the things they did during that war. Some show Central Committee meetings that made the decision to fight the Americans. Some show people in demonstrations, especially in the South, demanding that the foreigners leave. Some show the hard work of people in the north, sending food and soldiers south to drive them out. There are many portraits of people killed, or imprisoned in the infamous tiger cages, for fighting the United States and the South Vietnamese government it propped up until the last helicopter took off from the roof of the U.S. Embassy on May 1, 1975.

But despite the bombing and the meticulous documentation of the war’s terrible cost, the people I met displayed little hostility or bitterness. In the end, they’d won. How could the war’s planners back in Washington have thought it would turn out otherwise? The Vietnamese were no latecomers to insurrectionary organizing. They were hardly ignorant or apolitical countryfolk, although this was certainly the prevalent stereotype in Congress and the Pentagon.

The Army Museum is focused on the American war. But the half-dozen other museums in Hanoi that also document Vietnam’s revolutionary history make plain how long liberation took. Sophisticated political organizations took decades to mature and gain experience. By the time of the U.S. intervention, they’d been at it for many, many years. That experience finally brought about the U.S. defeat.

The Language of War

The language used to demonize Vietnam’s Communists and nationalists by those they sought to overthrow was just as vituperative as that used in the U.S. Congress against Muslim radicals today. Terrorist, after all, was a term used to describe anarchists and socialists for over a century. That language of terrorism and the Cold War was used to create hysteria that easily justified sending U.S. advisors, and then troops, into Vietnam once the French had been defeated in 1954. Ultimately, it was used to justify the B-52s and the 1972 Christmas bombing. It cost millions of Vietnamese lives, and tens of thousands of U.S. lives as well.

When President Reagan and his successors sought to overcome the “Vietnam Syndrome” to make later interventions acceptable, they once again used that language. It justifies even today’s use of the B-52s, 63 years after they began flying. The U.S. Air Force has no intention of retiring the 76 remaining planes in its fleet. In fact, the successors to General Curtis (“Bomb them back to the stone age”) LeMay now want to deploy them in Syria.

They are institutionally unwilling to remember. Bombing did not defeat the Vietnamese. Phuoc Luong is wrong. More B-52s would not have won that war. They will not win any new war against a people willing to do whatever it takes to survive and win.

Walking through the streets of Hanoi, I could see why. One morning I went out to Long Bien Bridge to take photographs at sunrise. The trains going north leave downtown Hanoi just as it gets light. It’s a great moment to see them emerge from the warren of houses next to the tracks, their old cars flashing past as they set out across the long span over the Red River.

Long Bien is an old bridge, and was one of the four great bridges of the world when it was built in 1902. A plaque at one end reminds the commuters who trundle past on bicycles and scooters that it was built by Gustav Eiffel, who used the same iron that went into his tower along the Seine in Paris. During the American war it was probably the one structure that U.S. bombers could clearly see from on high, and they blew it apart over and over.

Down below the bridge abutment is the Long Bien market, where many of the city’s fruit and vegetable sellers go to meet farmers bringing produce into the city. As I took pictures of the train and the stalls below, I tried to imagine the columns of smoke, the deafening roar of jet engines and then explosions, the screams of people torn to shreds with their dogs, their pushcarts and melons.

As the trains passed I wondered if the locomotives were the same as those that must have been repaired a thousand times during the war. They look old. Despite the glitz of Hanoi’s new wave of foreign investment, Vietnam is still a poor country. Things must be saved and reused again and again, including railroad cars and bridges.

I felt that persistence as the sun came up. It’s why the bombing, despite its immense destruction, failed so utterly.

David Bacon is author of Illegal People—How Globalization Creates Migration and Criminalizes Immigrants (2008), and The Right to Stay Home (2013), both from Beacon Press.