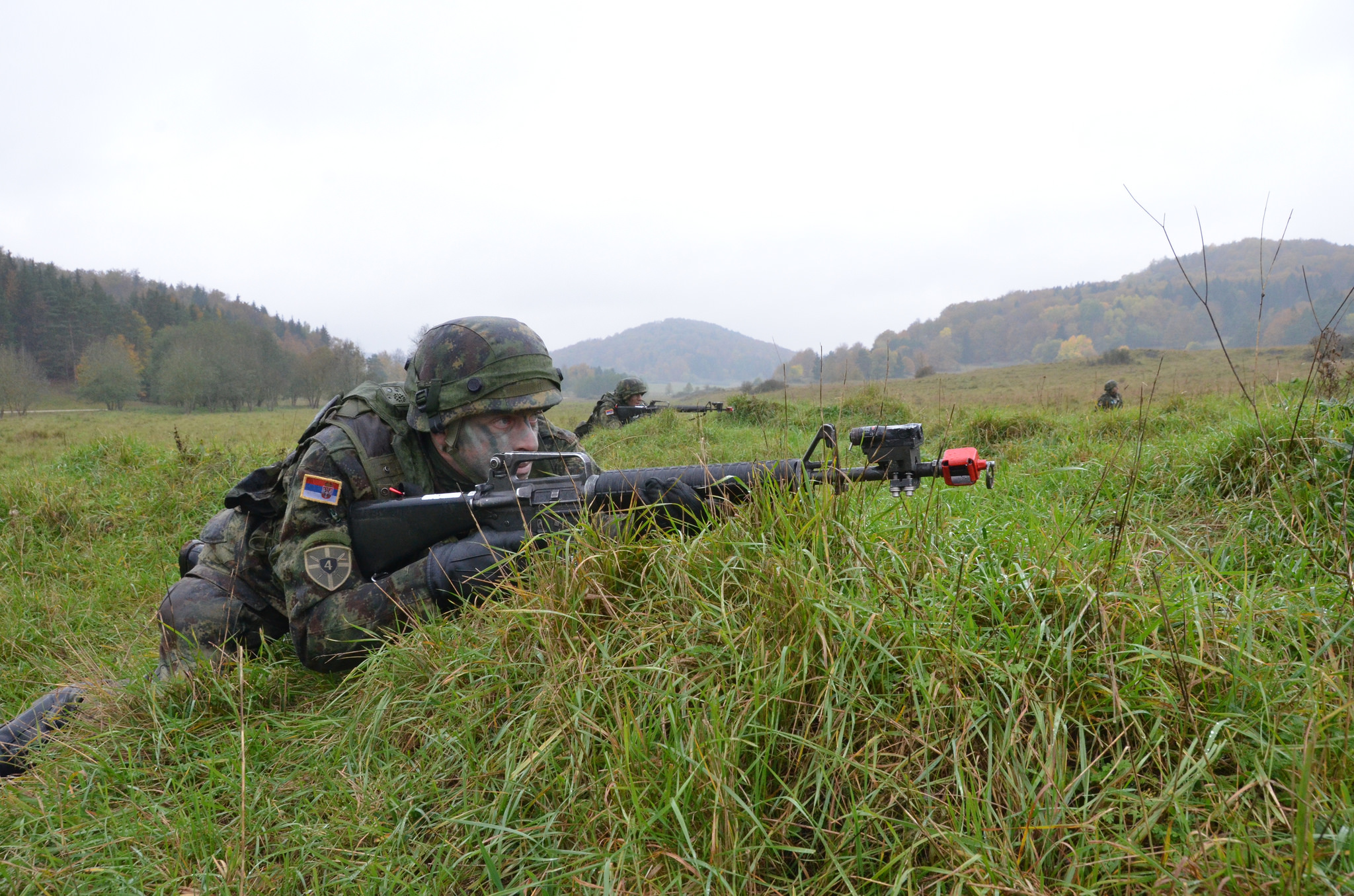 Despite the fallout in Ukraine, several Balkan countries are angling to join NATO — and freely misinforming their publics to get there.
By Igor Mekina | April 17, 2015

The first law of holes — “if you find yourself in a hole, stop digging” — still doesn’t seem to be valid in Europe, especially in the Balkan region.

Applied to geopolitics, this law would mean that because of the cold relations between Russia and the NATO countries, one could expect no further NATO expansion, at least for the time being. There are several good reasons for such a pause, or even for a complete stop to further expansion.

Instead, just the opposite is happening.

Forming and expanding military alliances — as realists in international relations observed a long time ago — quite often encourages the formation of counter-alliances. It can also instigate wars, and not only “cold” ones. This can happen especially when such alliances (like, for example, NATO) are prepared to act not only in a defensive manner among members, but in out-of-area missions as well — even without the authorization of the UN Security Council.

The establishment of the Shanghai Cooperation Organization (SCO) and the Collective Security Treaty Organization — as well as the increasingly close cooperation between Russia and China — are good examples of such a development. This proves that the expansion of NATO in Europe after 1991 really was a “strategic blunder of potentially epic proportions” for the West, as American diplomat George F. Kennan put it.

In a similar manner, the threat of possible Ukrainian membership in NATO has had a considerable impact on the unfolding tragedy in eastern Ukraine and elsewhere.

Despite all the recent geopolitical changes in the region, the Balkan countries of Macedonia, Bosnia and Herzegovina, and maybe even Serbia and Montenegro are working hard to secure NATO membership as soon as possible.

Some of these countries still face huge obstacles.

For Macedonia, the biggest problem is the unresolved question of the name of the country. Without a compromise, Greece won’t open the door for Macedonia — the Greeks still consider Macedonia a historical province in Greece and not an independent state.

Bosnia and Herzegovina, meanwhile, faces internal divisions. The country is in essence a confederation of two entities, the Bosnian- and Croatian-dominated BiH Federation and the Serbian-dominated Republika Srpska. Without the approval of Republika Srpska, the state simply cannot join NATO and probably never will, at least not in one piece. The Serbs are fiercely against joining NATO, which bombed Serb positions in BiH during the civil war in that country.

In Serbia proper, meanwhile, public opinion is still predominantly against membership in NATO. Serbs consider NATO the “handmaiden of independent Kosovo,” the historically important province of Serbia that declared independence in February 2008.

In Montenegro, there’s very low public support for planned accession, with only 35 percent of the public for NATO membership. But that could change soon, with the help of a well-known pro-NATO agitprop machine that has successfully campaigned in other former candidate countries.

A recently established pro-NATO website in Montenegro is only one example of the propaganda channels created for disseminating pro-NATO views. The site is edited by the “communication team of the Council of Membership in NATO.” The official aim of this “team” is to “better inform the public about NATO and the process of integration of Montenegro into the alliance,” and to “contribute to public dialogue concerning this important question.”

Representatives of this council are convinced that the “question of support of the public” is the only remaining obstacle for joining NATO. “Because of that, the accent should be on public support, on dialogue,” said Denis Avdagić, director of the North Atlantic Integration Promotion Organization. “We must openly respond to the many lies which are presented concerning NATO, and I’m sure that the citizens, if the real facts would be presented to them, will be able to make the right decision.” He also criticized the idea of neutrality as an option for a state as “a completely erroneous idea.”

Very similar are the views of Kristijan Poša, Hungarian ambassador in Montenegro. He is convinced that 2015 is “fateful for Montenegro” and compares membership in NATO with the historical moment when Montenegro gained independence.

NATO has chosen Hungary to be a contact state — a sort of “buddy state” to prepare the country for membership — for Montenegro. Previously, Hungary “helped” Slovenia and, according to Poša, Slovenia “did a good job.”

But Slovenia and Hungary aren’t the best examples of the process of open “dialogue” with the public or the “promotion” of NATO integration.

In 1995, only a third of the Hungarian population thought that NATO was a good choice for their country. But then the Hungarian government boosted its one-sided “information efforts,” and the results were incredible. In the end, 85 percent favored NATO membership. The turnout was only 49 percent.

Uli Cremer of the German Greens later said that during the NATO campaign, the Hungarian government totally “erased the borders between neutral information and one-sided propaganda.”

During popular soap operas on TV, for example, unknown characters appeared and spoke about the great benefits for Hungary if it decided to join NATO. The money for this propaganda came from the Hungarian Ministry of Defense, even though such financing was in clear breach of Hungarian laws. More than $2 million was spent on the effort.

For many in Hungary, the campaign was reminiscent of similar pushes under the Communist government. Observers from the British Helsinki Human Rights Group later wrote in their report that during the referendum, the “level of obstruction” of opponents “was unimaginable,” and concluded that what happened in Hungary set a “dangerous precedent.” Leading politicians from NATO countries are today criticizing Hungarian President Viktor Orban for the very same behavior that they considered suitable at the time NATO was expanding.

The result of Slovenia’s NATO referendum was not a miracle. It was facilitated by public-relations gimmicks and the one-sided propaganda efforts of the government. For instance, in April 2002, the Slovenian foreign ministry opened a special “NATOFON” phone number in the government’s Office for Information. A reader of the Mladina weekly newspaper explained the “objective” process of presenting “real facts” about NATO, a process very similar to what is now unfolding in Montenegro:

I asked the woman on the phone for three reasons why Slovenia should join NATO. I heard her typing on the keyboard, and then she gave me 10 reasons for joining NATO. After that I asked her to give me three arguments against Slovenia joining NATO. I was surprised to hear that she didn’t have such arguments in her computer. I insisted that she should tell me only one reason against NATO. But she responded that she would forward my question to her superiors and that I’d receive my answer in one week. Weeks passed, but I didn’t get any answer.

In a similar way, other government ministries became tools of the pro-NATO centers of power in Washington and Brussels.

Sometimes the propaganda efforts of the Slovenian government ended in a tragicomic public-relations disaster. For example, the Ministry of Foreign Affairs under Dimitrij Rupel prepared a special analysis about all “attacks on NATO.” The minister identified 236 articles “with extremely negative connotation toward NATO” published in the Slovenian media in 2002 and 2003. He frequently criticized the media on the basis of this analysis. When the weekly Mladina demanded access to this famous analysis, the minister simply — and in clear breach of the Law of Access to Public Information — rejected the request.

Despite all obstacles, Mladina was eventually able to obtain it.

The public was shocked when journalists presented the unusual “method” for the ministry’s analysis: Employees simply scanned different articles from various media, and everywhere the computer software “Infoklip” found the word “NATO,” the articles were labeled an “attack on NATO.” The first article counted as an “attack” described a meeting of Slovenian and German foreign ministers who discussed “the process of enlargement of EU and NATO.” Even cartoons and completely neutral or even “pro-NATO” articles were counted as “attacks on NATO.”

The classified paper characterized all well-known columnists and journalists in the Slovenian media as “Natoskeptics” or “Natophobes.” The unknown authors discovered that the main characteristics of both groups were an “ideological level of argumentation” in their articles and their belief that NATO was “an anachronism.” Despite this revelation, the promotion efforts of the government overcame the hesitations of the public.

Slovenia soon joined NATO. When the biggest Slovenian daily Delo conducted a public opinion survey in March 2014 on the 10th anniversary of Slovenian joining NATO, only 32 percent of citizens supported Slovenian membership. More than 66 percent of voters responded that they would vote against membership.

On the basis of this experience, voters in future NATO-candidate states should, when deciding for or against membership in NATO, take into consideration not only the positive but also the negative effects of NATO expansion.

It’s reasonable to believe that one is safer in a bigger alliance. But if such an alliance expands and intervenes out of area against adversaries prepared to respond, then one’s safety is not enhanced but actually compromised. Instead, the world has become a more dangerous place, a situation we are all facing now.

Igor Mekina is a journalist based in Ljubljana, Slovenia and Belgrade, Serbia.