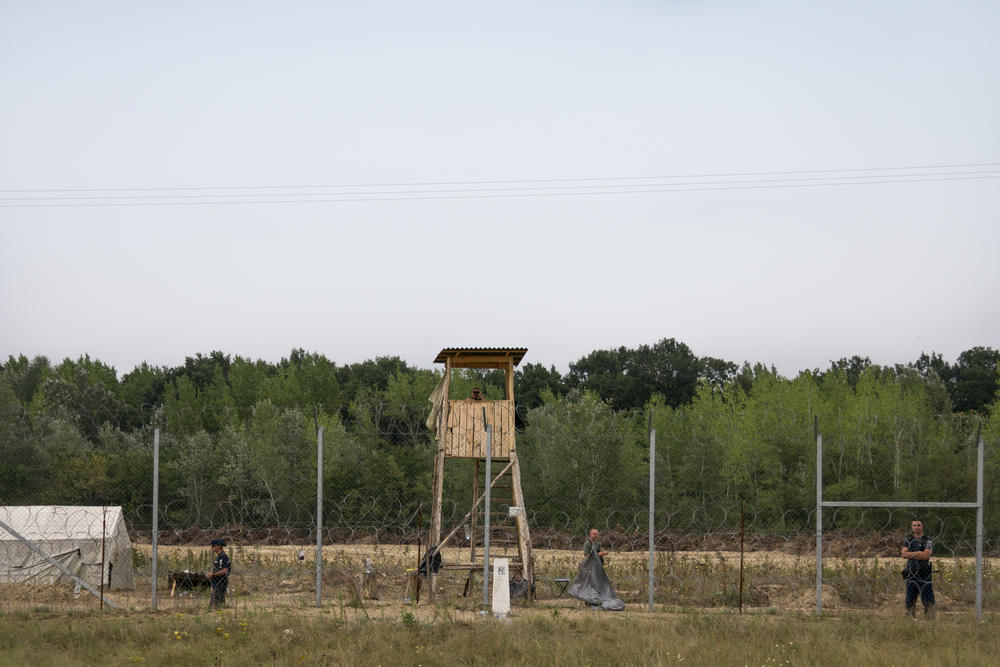 Fence between Hungary and Serbia (BalkansCat via Shutterstock)

Balkans: The Bulwark of Christianity?

Anti-immigration sentiment has created a new set of walls in the Balkans.
By Mira Oklobdzija | June 17, 2019

During 2018, 24,000 migrants and refugees entered Bosnia, travelling along the Balkan route. Compared to only 755 in the whole of 2017, it is a serious increase. The three largest nationalities were Pakistanis, Iranians, and Syrians.

Over the same period, Croatia registered more than 7,500 migrants, of whom 352 asylum-seekers stayed in the country. According to the Asylum Information Database, the Slovenian government registered 798 asylum applications in the first four months of 2018. In 2017, a total of 1,476 applications were lodged. Most of the asylum applicants came from Afghanistan and Algeria, and most of these were rejected (83.3 percent and 100 percent respectively.)

These migrants are not a homogenous group. Coming from different countries, some are fleeing wars, some are seeking refuge status and asylum, and others are escaping poverty and hope to find a better life in the West. But Europe views them as a single, menacing body, rejecting them as “other.” Many leaders imagine a new wave of invading Ottoman forces bringing Islam to Europe’s doorstep. Without stating it openly, many countries in southeastern Europe see themselves as bulwarks of Christianity, just as they did centuries ago, forgetting that the newcomers are not coming to conquer but to survive, live, and work. Only the bold right-wing nationalists dare to express this sentiment openly.

The Balkan Route, through which thousands of non-European citizens are attempting to reach Western Europe, connects the countries of southeastern Europe with the Middle East, North Africa, and southwest Asia. This route initially passed through Turkey and Greece, then across Bulgaria or Macedonia, and then Serbia and Hungary before heading toward Germany or Austria and points west and north. But the route changed after Hungary, under Viktor Orbán’s nationalist government, sealed off its borders via heavy surveillance, fences, and police brutality against migrants. The route has thus shifted towards the south, crossing Albania, Montenegro, Serbia, and then Bosnia, where thousands of migrants are now stuck. Croatia is the next step and Slovenia/EU comes after that.

European politics have moved to the right as a result of this unsolved problem, especially because it is often presented as unsurmountable. In southeastern Europe, anti-immigrant sentiment has become routine among mainstream politicians. For example, Croatian President Kolinda Grabar-Kitarović, a big admirer of the immigration politics of both Trump and Orbán, said in 2015 during her visit to the Opatovac refugee camp:

Only one family told me they were from Syria. Most of them are coming from Afghanistan and Pakistan. They’re all going to Germany. Most of them are migrants for economic reasons. You can feel sorry for them, but neither EU nor Croatia can accept all the misery of this world.

On another occasion, she said:

When I’d see migrants, I’d often ask myself if that child, who looked terrified while holding someone’s hand, really belonged to that people? Or was it some random child that was taken with them to make it easier to pose as a refugee family?

Despite these comments and Croatia’s low rate of asylum acceptance, the Council of Europe’s Special Representative of the Secretary General on migration and refugees Tomas Boček had this to say about the country’s policies:

Croatian authorities have succeeded in providing fairly good material reception conditions, both for adults and children… The authorities expressed the understanding that the existing institutions were not adequate for unaccompanied migrant and refugee children.

Close by, in Slovenia, live approximately 50,000 Muslims, which represents around 2.4 percent of the total population of two million inhabitants. They came mostly from Bosnia in search of work and a better life in the 1950s and 1960s, and have never fully been accepted. In May 2018, the right-wing populist Slovenian Democratic Party (SDS) held its main election convention, where former Slovenian prime minister and head of the party Janez Janša said that the “degenerate left” is “inviting migrants from completely different civilizational backgrounds. We do not accept that.” Orbán endorsed SDS and said at the rally that “if Europe surrenders to mass population movement and migration, our own continent will be lost. Unless we watch carefully we could lose our countries.”

Bosnia is in the heart of the region. Today, around 50 percent of the population is Muslim (followed by Orthodox Christians and Catholics). Bosnian Muslims were the biggest victims of the Balkan wars of the 1990s, and many learned first-hand what it meant to be a refuge. But that experience is lost on many Bosnian politicians. Dragan Mektić, the Bosnian minister of security, announced that freedom of movement will become even more restricted in the country with the potential introduction of measures to limit people residing in the camps from leaving in the evenings.

Serbia, meanwhile, is disgracing itself less than its neighbours, at least for the moment. Serbia hosts around 4,200 refugees and migrants who arrived recently. Serbian media and politicians are criticizing Croatian and Bosnian police brutality, quoting stories of the migrants and refugees who had to return to Serbia and are now sleeping in the parks of Belgrade.

The response to refugees and migrants is by no means unified. At the end of 2018, Balkan Insight reported that more than 700 organizations, individuals, journalists, and public figures in Croatia signed an open letter criticizing the media’s “one-sided, simplified and ultimately dishonest and unfair reporting” about migrants and refugees.

In a report published in March 2019, Amnesty International criticized the way the Croatian border police treats refugees stating that they are sent back to Bosnia-Herzegovina without access to asylum procedures. “Many described how they were beaten and intimidated,” Amnesty reported, “how travel documents and mobile phones were stolen or destroyed.”

Croatia had always rejected previous allegations of this sort. Although a member of the European Union, Croatia is not part of Schengen. It is eager to demonstrate its readiness to join the border-free area in 2020 by protecting the EU’s external borders from irregular migration. As such, according to Amnesty:

The north-western Bosnian towns of Bihać and Velika Kladuša, nestled at the very border with Croatia, have become a temporary refuge for some 5,500 refugees and migrants fleeing conflict, persecution and poverty. These men, women and children currently occupy defunct former factories without basic amenities. Limited capacity and resources, along with the political stalemate and institutional dysfunction that has paralyzed the country since the end of the war in 1995, mean that Bosnia and Herzegovina has been ill-prepared to provide adequate protection or living conditions to refugees and migrants.

In 2015, fences went up between North Macedonia and Greece, Serbia and Hungary, and Slovenia and Croatia. The latest fence is now under construction between Croatia and Bosnia. These barriers are designed to keep out a lot of people who happen to be Muslim, non-white, and indigent. European nationalists have also accused them of being terrorists, even if many of them are just three years old. But that’s what it means to be a bulwark of Christianity and police the borders against so-called civilizational threats.