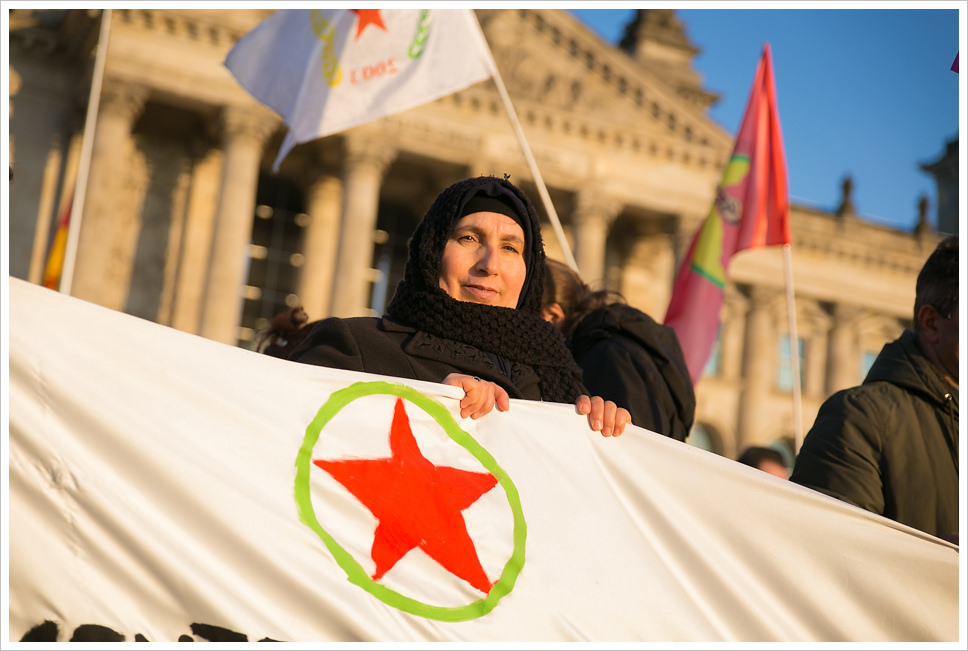 Behind Washington’s ‘Crackpot’ Deal with Turkey to Fight ISIS

Under the guise of fighting ISIS, Turkey's president is re-igniting a bloody war with the Kurds for his own political purposes.
By Conn Hallinan | August 4, 2015

The recent agreement between Turkey and the United States to cooperate against the Islamic State in Syria brings to mind the sociologist C. Wright Mills’ description of those who make American foreign policy as “crackpot realists”: realists about advancing their careers, crackpots about the policies they pursue.

On paper, the plan allows the U.S. to use Turkish airbases to bomb the Islamic State in exchange for helping to set up a “safe zone” along Turkey’s border with northern Syria. According to Turkish Prime Minister Ahmet Davutoglu, that will allow “moderate forces like the Free Syrian Army” to “take control of areas freed from” the Islamic State.

There’s also a broader agreement for both sides to ramp up support for what the New York Times characterizes as “relatively moderate” Syrian insurgents, and for Turkey to target the Islamic State directly. One U.S. official described the agreement as “a game changer.”

In reality, the plan will entangle the U.S. more deeply in the Syrian civil war and do next to nothing for the so-called “moderate” forces Washington’s been trying and failing to prop up for years. It will also ensure Washington’s tacit support for Turkey’s government as it re-ignites its 40-year-old war with the Kurds.

A War on the Kurds

The plan will tosses the Kurds, one of Washington’s most reliable allies in the fight against the Islamic State, under a bus. “The Americans are not very clever in calculating this sort of thing,” Kamran Karadaghi, a former chief of staff to erstwhile Iraqi President and Kurdish leader Jalal Talabani, told the Independent’s Patrick Cockburn. “Maybe they calculate that with Turkey on their side, they don’t need the Kurds.”

While Turkey is also bombing ISIS, the major focus of its latest attacks have been the Kurds. On July 23, a small number of Turkish F-16s bombed a handful of ISIS targets in northern Syria. In contrast, 75 Turkish F-16s and F-4Es pounded the Kurdish Workers Party in Iraq with 300 smart bombs, striking hundreds of targets.

The massive bombing attack on the PKK in Iraq’s Qandil Mountains shatters a two-year truce in a four-decade war that’s killed more than 40,000 people. Turkey’s ostensible reason for re-starting the war was a PKK assassination of two Turkish policemen following an Islamic State bombing in the border town of Suruc, which killed 31 young Kurdish activists on July 20. The Kurds have long complained that the Turkish government has encouraged extremist Syrian insurgents, including turning a blind eye to the activities of the Islamic State.

The real reason behind ending the truce, however, is a calculated campaign by Turkish President Recep Tayyip Erdogan to spin up a new round of ethnic hatred inside Turkey and force another election. His right-wing Justice and Development Party (AKP) lost its majority in the last election as votes for a progressive Kurdish-led party soared, and Erdogan’s allies have been unable to form a government since.

Plans in the Flaw

That’s the only reasonable conclusion after examining the flaws in the official rationale.

First, there are no “moderate” forces in the Syrian civil war. The Free Syrian Army is, at best, a marginal player. The major antagonists of the Assad regime are Islamic extremists, including the al-Qaeda associated Nusra Front, the Ahrar al-Sham coalition, and the Islamic State. Indeed, one reason why the Turkish military has been so wary of getting involved in Syria is because it doesn’t want to be allied with the groups leading the fighting. A buffer zone along the border will allow those extremist groups to take refuge in spaces protected by Turkish air power.

Erdogan is fixated on overthrowing Syrian President Bashar al-Assad, arguing that only regime change in Damascus will weaken the Islamic State. But many analysts think the exact opposite and cite the Libya experience as an example. If the Assad regime falls, the extremists — not the moderates — will fill the vacuum. A spillover of violence into Jordan and Lebanon is almost guaranteed, just as the Libya debacle has spread unrest throughout Central Africa.

The buffer is also directed at the Kurdish forces that have been so effective in fighting the Islamic State, successfully defending the city of Kobani and liberating several other towns.

Second, bombing is only effective if it’s coordinated with ground forces, and right now the only effective ground forces fighting the Islamic State in the region are the Kurds. Bombing by itself has never worked, as the Saudis are rapidly finding out in Yemen.

As for the Kurds, a little history.

One of Erdogan’s major accomplishments as prime minister was a 2012 ceasefire with the PKK and a promise to deliver more autonomy to Turkey’s 15 million Kurds. Erdogan saw the ceasefire as a way to bring the Kurds on board in his campaign to change the Turkish constitution and create a centralized and powerful presidency.

At the time, many Kurds — most of them older, rural, and deeply religious — supported the Islamist-leaning Erdogan because, for them at least, Islam trumped Kurdish nationalism.

With this in mind, Erdogan successfully ran for president last year.

But the promised reforms in governance, education, and language rights — the Kurds speak several dialects, none of them Turkish — never came through, because Erdogan also relies on right-wing Turkish nationalist voters deeply hostile to anything that smacks of Kurdish autonomy.

Erdogan might have been able to thread that needle. But then the AKP made a major mistake.

When the Islamic State besieged the Syrian town of Kobani, Turkey refused to help the Kurdish defenders. Indeed, Erdogan equated “Kurdish terrorists” with the Islamic State. Demonstrations demanding that Turkey come to the Kurds’ aid were brutally suppressed by the police, and scores of Kurds were killed. These developments shifted sentiments in the Kurdish community, and former AKP backers transferred their support to the left-wing People’s Democratic Party (HDP).

Meanwhile, the HDP transformed itself from a Kurdish-based party to a national organization, winning 1.1 million non-Kurdish votes and 80 seats in the 2015 parliamentary elections, effectively derailing Erdogan’s drive to create a powerful executive.

Erdogan has maneuvered ever since to force new elections. By attacking the Kurds, he hopes to force the HDP to choose between its Kurdish base and the rest of Turkey. And he’s gambling that the assault on the Kurds will rally right-wing nationalists to abandon the MHP and move to the AKP. If a lot of Kurds and Turks die because of this cynical stratagem, so be it.

Why is the White House going along with this madness?

In part, because a number of U.S. State Department officials have the same obsession with overthrowing Assad as Erdogan does. In part that’s because the U.S. military often manages to convince civilians that dropping a lot of bombs will work, all experience to the contrary. And partly it’s that crackpot thing.

As Hugh Roberts points out in his excellent analysis of Syria in the London Review of Books, there is a possible path out, but it is almost exactly the opposite of the one Turkey and the U.S. are pursuing.

To begin with, the demand that Assad must relinquish his office before there can be serious talks should be dispensed with. No one — least of all Assad — is going to negotiate his own demise, and the Syrian Army and the country’s Alawite, Christian, and Druze minorities know exactly what will happen to them if the Damascus regime collapses. The Nusra Front may not as brutal as the Islamic State, but that’s about the only standard by which the al-Qaeda affiliate looks good. Anyone who believes the “moderates” will take over should consider unicorn hunting as a profession.

In the long run Assad should go, and one suspects that Syrians would vote him out at some point given the chance. But the “out first” demand, popular among Syrian oppositionists and some in the State Department, is just a way to continue the war. The only real hope is a ceasefire and a national unity government representative of Syria’s enormously diverse population. An arms embargo on all parties, and a commitment to block foreign fighters from infiltrating the country, could encourage the parties to step back from the current stalemate and consider negotiations.

Will that get rid of the Islamic State? Nope. The Islamic State is an actual state, with a large population, a lot of whom are not just waiting to rise against their Islamic captors. ISIS is brutal — though the region’s Arabs suffered far more deaths in the invasion of Iraq — but it’s not corrupt. To imagine that the inept and corruption-riddled Iraqi Army is up for a serious scrap is delusional.

The Turkish Army doesn’t want to go into Syria, and there’s zero support in any Western country for a replay of Iraq and Afghanistan. On top of which, a U.S. or NATO invasion is exactly what ISIS would like to provoke.

Ironically, the only force that could possibly defeat the Islamic State is the Syrian Army. Getting from here to there, however, will require a diplomatic sea change in the region. But one thing is certain: the current U.S.-Turkish “plan” will make everything worse.

How do these crackpots come up with this stuff?