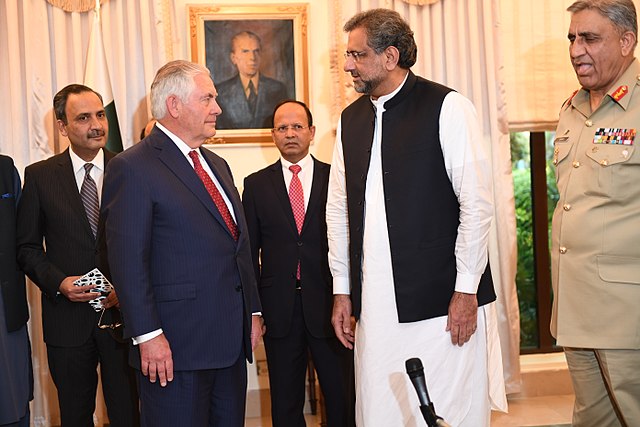 Beneath America’s Turbulent Relationship With Its Most Hated Ally

Relations between the United States and its erstwhile ally Pakistan can best be characterized as turbulent. Ever since Pakistan decided to entrench itself in the American camp during the Cold War, Pakistan and America have gone back and forth between a close alliance and outright hostility.

The most recent salvo in the tumultuous relationship occurred when America initiated severe limitations in May on the mobility of Pakistani diplomats stationed in the US, a move Pakistan reciprocated. This step comes in the wake of Donald Trump’s New Year’s tweet that accused Pakistan of being disingenuous, and of taking “billions of dollars of American aid” while supporting the “enemies [the Taliban] America is fighting in Afghanistan,” The two countries seem to have reached a nadir in their relationship.

The fundamental problem in Pakistan’s relationship with the United States, at least for the last two decades, has been Washington’s tendency to view Islamabad solely through the prism of defeating the Taliban in Afghanistan. America’s desire to hinge its support for Pakistan on the latter’s contribution to the “war on terror,” and to America’s own success in Afghanistan has led to the near incessant calls on Islamabad to do more, and to a rising U.S. frustration over Pakistan’s seemingly duplicitous role in fighting the Taliban.

The truth, however, is more nuanced than that. Although Pakistan was slow in acting against the Haqqani network and harbored certain radical elements as part of its misguided “strategic depth” ideology, it has now taken effective action against militants from all outfits. Operation Zarb-e-Azb, which Pakistan launched in June 2014, has nearly wiped out all terrorists from Pakistan’s hinterlands and has led to a 70 percent fall in terrorist attacks in the country over the past three years. Pakistan has had to pay a tremendous price for this success however, with the country suffering nearly $120 billion in damages due to terrorist strikes since 2001, while nearly 70,000 army personnel, policemen, and civilians have lost their lives in the struggle.

America’s recent antagonism towards Pakistan, therefore, cannot solely be attributed to Pakistan’s role in the War on Terror. Much of the blame lies instead in America’s failure to bring peace to Afghanistan, its changing attitude towards the region through its “Pacific pivot,” and its opposition to growing Chinese influence.

The recent resurgence in the Taliban in Afghanistan owes much to America’s own failures in the country and relatively little to any putative support from Pakistan. The complete lack of an American emphasis on political settlement, for instance, has only led to groups that the current government in Kabul has marginalized taking up arms against America and supporting the Taliban.

Donald Trump’s newly announced “South Asia Strategy” once again emphasizes military engagement over political efforts to end the 16-year-old conflict. This reliance on a military solution has only further turned the Afghan population against America and against Ashraf Ghani’s government, with attacks striking Kabul at a frequency of nearly one attack every week.

Alongside America’s approach towards Afghanistan is America’s strategic “pivot” to Asia that aims to counter rising Chinese influence. Central to this pivot was to promote America’s economic interests in the region against the rapid rise of China as a regional and global power. The now uncertain Trans-Pacific Partnership (TPP), for example, was meant as a counterweight to China’s highly ambitious One Belt One Road (OBOR) project that seeks to connect nearly 68 countries through Chinese infrastructure and investment.

South Asia has naturally felt the ramifications of America’s desire to circumscribe Chinese influence. America has increasingly sided with India in its conflict with Pakistan to shore up the former as a balancing force against China. This has naturally pitted Pakistan, which is increasingly finding itself under Chinese influence, against both America and India. In fact, a few months ago, Defense Secretary Jim Mattis claimed that the China Pakistan Economic Corridor (CPEC)—a cornerstone of OBOR and a project that can alter Pakistan’s economic fortunes—passed through “disputed territory,” a claim that resonates strongly with India’s own opposition to the $50 billion project.

Shifting geopolitical concerns are thus at the heart of America’s deteriorating relationship with Pakistan. The first step for both sides in recalibrating this relationship must be to de-hyphenate from other players such as Afghanistan and India. America must recognize Pakistan’s efforts in the war on terror and must also stop castigating Pakistan for Kabul and Washington’s failure to stem the tide of terrorism. Similarly, Pakistan must be more receptive to assisting Afghan security forces and must be open to the possibility of India playing a constructive role in rebuilding Afghanistan.

The two countries must also recognize the benefits of their mutual relationship. For Pakistan, a healthy relationship with America guarantees better economic prospects since America is the largest destination of Pakistani exports, while the US is also responsible for nearly 12 percent of Pakistan’s total remittances. America must realize that a Cold War narrative that pits the US against China will only further add to instability in the region. Further, no peace effort in Afghanistan will succeed without Islamabad having a say in the peace process. Only by making mutual compromises in order to better take advantage of mutual benefits can Pakistan and the United States exit the current impasse in relations—and increase regional security in the bargain.