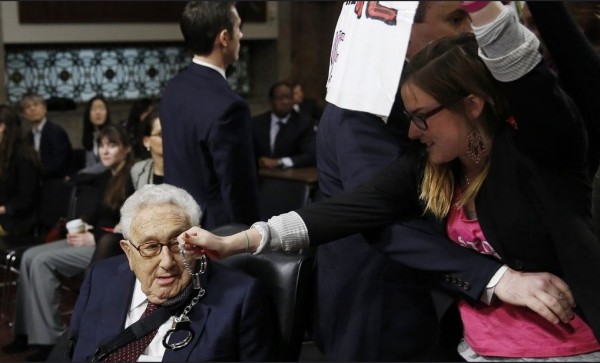 Bernie’s Broadsides Against Kissinger Weren’t Even Half of It

At the February 11 Democratic Debate, Bernie Sanders and Hillary Clinton had a spirited exchange about an unlikely topic: the 92-year old former Secretary of State Henry Kissinger.

In particular, Sanders berated Clinton for saying that she appreciated the foreign policy mentoring she got from Henry Kissinger. “I happen to believe,” said Sanders, “that Henry Kissinger was one of the most destructive secretaries of state in the modern history of this country.”

In one of Sanders’ rare outbursts of enmity, he added, “I am proud to say that Henry Kissinger is not my friend. I will not take advice from Henry Kissinger. And in fact, Kissinger’s actions in Cambodia, when the United States bombed that country, overthrew Prince Sihanouk, created the instability for Pol Pot and the Khmer Rouge to come in, who then butchered some 3 million innocent people, was one of the worst genocides in the history of the world. So count me in as somebody who will not be listening to Henry Kissinger.”

Clinton went on to defend Kissinger, using the example of China. “His opening up China and his ongoing relationships with the leaders of China is an incredibly useful relationship for the United States of America,” she insisted.

Sanders responded that Kissinger scared Americans about communist China, then opened up trade so U.S. corporations could dump American workers and hire exploited, repressed Chinese. First he warned us about “the terrible, authoritarian, Communist dictatorship,” groaned Sanders. “Now he’s urging companies to shut down and move to China. Not my kind of guy.”

Now that many Americans, particularly young ones, are hearing the name of Henry Kissinger, they should learn some other reasons why Kissinger wouldn’t make a good mentor.

As secretary of state, Kissinger facilitated the horrendous September 11, 1973 coup against the democratically elected government of Salvador Allende that brought to power the ruthless dictator Augusto Pinochet in Chile. As some 5,000 people were being detained and tortured in Chile’s National Stadium, Kissinger told Pinochet, “You did a great service to the West in overthrowing Allende.” The Pinochet dictatorship, which lasted for two decades, left over 3,000 people dead or missing, thousands tortured, and hundreds of thousands driven into exile.

There was also Kissinger’s role in the brutal 1975 Indonesian invasion of East Timor, which took place just hours after Kissinger and President Ford visited Indonesia. They’d given the Indonesian strongman Suharto the U.S. green light — and the weapons — for an invasion that led to a 25-year occupation in which over 100,000 soldiers and civilians were killed or starved to death. The UN’s Commission for Reception, Truth, and Reconciliation in East Timor (CAVR) concluded that U.S. “political and military support were fundamental to the Indonesian invasion and occupation” of East Timor.

The report by the UN Commission on Human Rights describes the horrific consequences of that invasion. It includes the gang rape of female detainees following periods of prolonged sexual torture — including the use of snakes, genital mutilation, all manners of battery and burning, and long periods of time in which their heads were submerged underwater.

From 1969 through 1973, it was Kissinger, along with President Nixon, who oversaw the slaughter in Vietnam, Cambodia, and Laos — killing perhaps one million during this period. He was the one who gave the order for the secret bombing of Cambodia. Nixon “wants a massive bombing campaign in Cambodia,” Kissinger was recorded explaining. “He doesn’t want to hear anything about it. It’s an order, to be done. Anything that flies on anything that moves.”

In 2001 the French judge Roger Le Loire issued a warrant to have Kissinger appear before his court to account for his actions. When Kissinger received the summons at the Ritz Hotel in Paris, he fled the country. More indictments followed from Spain, Argentina, and Uruguay — and even a civil suit in Washington DC.

The late writer Christopher Hitchens, in his book The Trial of Henry Kissinger, skewers Kissinger for ordering or sanctioning the destruction of civilian populations, the assassination of “unfriendly” politicians, and the kidnapping and disappearance of soldiers, journalists, and clerics who got in his way. He holds Kissinger responsible for war crimes that range from the deliberate mass killings of civilian populations in Indochina to collusion in mass murder and assassination in Bangladesh, as well as the overthrow of the democratically elected government in Chile and the incitement and enabling of genocide in East Timor.

Hitchens was a lot harder on Kissinger than the civil Bernie Sanders. “Kissinger should have the door shut in his face by every decent person and should be shamed, ostracized, and excluded,” Hitchens said. “No more dinners in his honor; no more respectful audiences for his absurdly overpriced public appearances; no more smirking photographs with hostesses and celebrities; no more soliciting of his worthless opinions by sycophantic editors and producers.”

Hitchens could have added another category of people who shouldn’t solicit Kissinger’s dangerous opinions: presidential candidates.