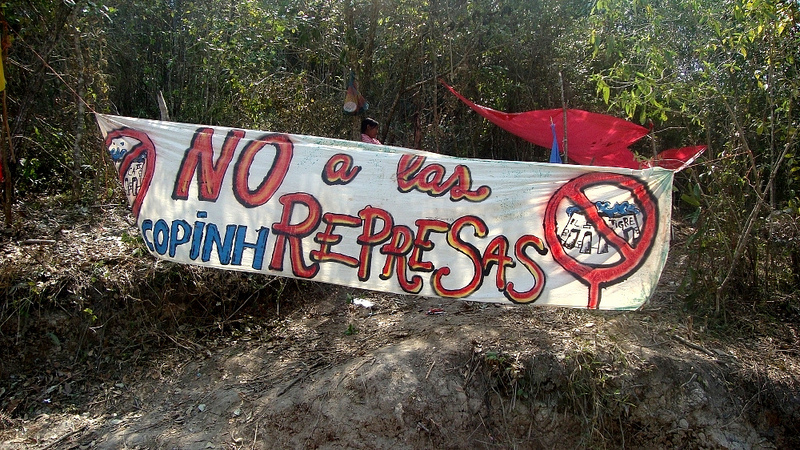 In the face of escalating repression, Honduran indigenous groups are standing against transnational plunder.
By Jeff Conant | October 10, 2013 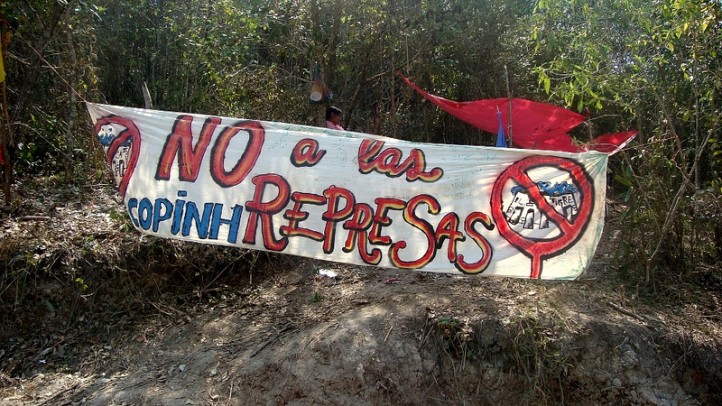 Honduran authorities want Berta Cáceres in prison. Even more, they want her dead.

Berta, as she is fondly known by her many friends in Honduras and beyond, is a Lenca indigenous woman, and one of the founding directors of the National Council of Popular and Indigenous Organizations of Honduras (COPINH). She is now the face of social movement resistance in Honduras, which in recent months has seen an escalation of state repression against social movement leaders, indigenous peoples’ organizations, environmentalists, and political dissenters. She went into hiding on September 20.

But as I write, against all odds, Berta Cáceres is still alive.

COPINH, one of the strongest voices in Mesoamerica for the defense of indigenous peoples’ rights, was founded in the early 1990s to fight logging companies in the territories of the Lenca people. After decades of struggle, COPINH has expelled dozens of logging operations from Lenca territories, recovered over 100 indigenous communal land titles, and served as a critical voice in international forums advocating for the right of indigenous communities to give or withhold their binding consent to any megaprojects planned for their territories.

Today, COPINH is struggling against a mega-complex of four large dams in the Gualcarque River basin, called the Agua Zarca dam project, being undertaken by a Chinese corporation called Sinohydro and a Honduran company called Desarrollos Energéticos S.A. (DESA). For many months, Lenca communities have stiffly resisted the hydroelectric project in the region of Rio Blanco, the ancestral territory of the Lenca people. Amidst rumors that Sinohydro may pull out due to the complications of undertaking construction against the will of the majority of people in the region, DESA has gone to great lengths to attack and undermine the local resistance.

In an ongoing series of trials, Berta and two other leaders of COPINH—Aureliano Molina and Thomas Gomez—have been charged with inciting the communities of the region to cause material damage to DESA-Sinohydro worth nearly $3.5 million U.S. dollars. The defendants and Rio Blanco villagers have categorically rejected the accusations.

Victor Fernández, the defense lawyer for the three indigenous leaders, says the trials and the charges are all part of a strategy to force through unpopular megaprojects like dams, mines, and industrial monocultures.

“They want to terrorize and weaken the social movement leaders and criminalize the exercise of citizens’ rights,” Fernández said.

On September 20, Judge Lissien Lisseth Knight Reyes ordered Berta to be imprisoned immediately. She also ordered “alternatives to prison” for Aureliano Molina and Thomas Gomez. Berta, who has been required to report to a judge every week for months, failed to show up for the trial on September 20 and has not been seen since.

Fernández, in an interview with journalist Giorgio Trucchi, said the judge’s decision in favor of the prosecution signals the beginning of a new phase of widespread repression.

“Once again,” Fernández said, “this ruling demonstrates that, in Honduras, the system of justice is easily manipulated to defend the interests of corporations that have violated and trampled the dignity and the rights of the indigenous people of Río Blanco.”

The September 20th ruling that called for the immediate detention of Berta Cáceres also called for the residents of Rio Blanco—who had been blocking the area where the dam construction is to take place—to immediately abandon the scene of the crime. Fernández calls the charge “totally incomprehensible and unacceptable. Are they going to evict the people from their communities and ancestral territories? This will imply greater militarization of the zone and increasing violence.”

“Unfortunately,” says Fernández, who is now at risk of arrest himself for expressing his views in the case, “the justice sector has become an instrument in the hands of these companies, and is operating as a hostage in the service of capital.”

The struggle continues not only in community protests and in the courts, but in financial arenas as well.

Banktrack is an international NGO network that pressures private and multilateral banks to apply robust social and environmental criteria to their projects. Having learned that the Netherlands Development Finance Company (FMO) is currently considering a request for financial support for the Agua Zarca hydroelectric dam project, Banktrack has challenged the Dutch finance company to live up to its own standards and refuse the project. FMO subscribes to the performance standards of the International Finance Corporation and the Equator Principles. Both call for broad stakeholder support and free, prior, and informed consent for megaprojects. If those criteria are to be upheld, Banktrack asserts, then FMO should suspend its loan.

On the ground, meanwhile, the struggle is visceral and violent. In July, the Honduran Army indiscriminately shot at demonstrators in Rio Blanco, killing Lenca leader Tomás Garcia and seriously injuring his son while they were walking with other community members to the facilities owned by DESA and Sinohydro. Uncounted others have been attacked, kidnapped, and threatened. The killing of Garcia coincided with the passage of a new law on development promotion that will facilitate the sale of public and natural resources for development purposes.

Dana Frank, writing for the Miami Herald, notes that the Honduran constitution explicitly forbids military participation in policing. Nonetheless, President Porfirio Lobo has gradually extended the “temporary” militarization of law enforcement since he took power in a military coup in 2009. Military personnel now routinely and randomly patrol neighborhoods in the large cities and control the country’s prisons. On August 22, the Congress created a new “hybrid” military police force that will have 5,000 new officers on the streets by early October—a month before the election that many believe could oust the coup-derived government.

In a 2012 New York Times opinion piece, Frank laid responsibility for the Honduran human rights crisis directly at the feet of the U.S. State Department and the Obama administration, which quickly recognized Lobo’s electoral victory, even when most of Latin America would not. Frank noted that “Mr. Lobo’s government is, in fact, a child of the coup.” The Lobo government, with the implicit support of the United States, has retained all of the military figures who perpetrated the coup. And yet, for defending their rights, Berta Cáceres and other community leaders are charged with crimes against the state.

Honduras has long served as a resource colony and a military base for the United States. Unlike in neighboring Central American republics, where open violence and repression galvanized solidarity efforts worldwide, the violence in Honduras has long been made invisible—ultimately serving the interests of the United States and the extractive industries that appear intent on wringing every last drop of blood from the impoverished nation.

Two months before the country’s national elections, set for November 24, 2013, Honduras is under siege. The U.S. State Department, an important player in the long and violent history of Honduras, has a clear role to play in quelling the violence and ensuring that Berta Cáceres remains alive—especially given the upcoming Honduran elections. But far from censuring the Honduran government and its security forces for the systematic repression of popular dissent, U.S. aid to the Honduran police and military has risen steadily since the 2009 coup.

The State Department reportedly withheld funds from the Honduran National Police last year under congressional pressure to implement the Leahy Act, which bans U.S. funding for security forces implicated in human rights violations, but today the money continues to flow. The Obama administration should stop funding Honduran security forces immediately, denounce the violence perpetrated by the Honduran police, and raise questions about the trumped up charges, harassment, and extra-judicial killings that have forced Berta Cáceres to go fugitive rather than submit to the fate of so many of her colleagues. In the absence of clear signals from Washington, there is no possibility of anything resembling a free and fair election in November.

With or without government action, international solidarity is essential to protect the human rights of Hondurans. In an attempt to raise the heat on authorities in both the United States and Honduras, organizations throughout the Americas have declared October 10-12 international days of action in support of Berta Càceres and the indigenous movements in Honduras. Groups from Amnesty International to School of the Americas Watch to Friends of the Earth International have called for solidarity, and an Avaaz petition is demanding that President Porfirio Lobo drop the charges against Berta and COPINH. It’s time that this little-regarded nation and its fierce indigenous-led resistance got some justice.

Jeff Conant is the International Forests Campaigner for Friends of the Earth-U.S., an occasional journalist, and author of A Community Guide to Environmental Health and A Poetics of Resistance: The Revolutionary Public Relations of the Zapatista Insurgency.