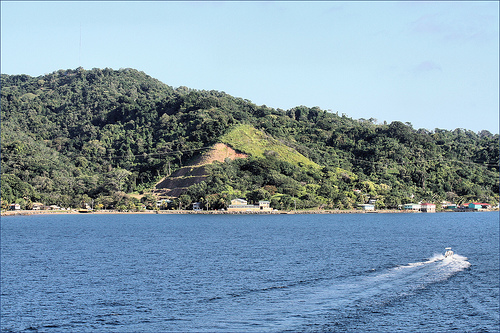 Beyond Drug Trafficking: Toward Genuine Security in the Caribbean

The western hemisphere’s preoccupation with the drug war is sapping resources that could be better employed to meet other security challenges.
By W. Alex Sanchez | August 13, 2013

Drug trafficking is, by many accounts, a major security challenge in the Caribbean region.

Due in part to aggressive counter-drug trafficking operations in Central America, drug traffickers based in Mexico and Colombia increasingly use the Caribbean as an alternative path for drugs en route to the United States.

To transport this volume of traffic, a growing number of boats—including the infamous narco subs—cross Caribbean waters carrying contraband. Many pass without being stopped, because most regional security forces lack sufficient coast guard personnel or equipment to properly monitor their territorial waters.

With large quantities of drugs smuggled across Caribbean waters each year, other countries have stepped in to stem the flow. For example, Operation Lionfish, a multinational law enforcement initiative, brought police agencies from multiple nations in the Caribbean and Central America into coordination with the International Criminal Police Organization (INTERPOL). The operation, which ran from May 27 to June 10, captured 142 suspects and seized up to 30 tons of cocaine, heroin, and marijuana. In mid-July, the U.S. Coast Guard stopped a speedboat that was carrying 2,300 pounds of cocaine in the Central Caribbean.

But the hemisphere’s preoccupation with the drug war may be sapping resources that could be better employed to meet other security challenges. A recent report by the Implementation Agency for Crime and Security (IMPACS), an arm of the Caribbean Community (CARICOM), offers several recommendations. Presented at a February 2013 CARICOM summit in Port-au-Prince, Haiti, the report identifies major challenges for Caribbean nations and provides policy recommendations for a wide range of security issues.

Disaster management surfaces as a priority because the region is continually vulnerable to earthquakes (like the devastating one that hit Haiti in 2010) and hurricanes (like Hurricane Ivan in 2004 and Hurricane Emily in 2005, which hit Grenada). As the report makes clear, natural disasters have a “negative impact on [local economies], health, environment, and the Region’s vital tourism industry, [and such] catastrophes tend to exacerbate pre-existing problems and inequalities.”

Caribbean nations themselves are carrying out high-level meetings to improve regional responses to disasters. For example, in mid-July, the Caribbean Disaster Emergency Management Agency (CDEMA) hosted a meeting in Barbados to plan regional responses to climate change. A CDEMA press release about the meeting stressed the importance of such summits, as they serve to create “a resilient Caribbean as the projections for extreme hydro-meteorological events show an increase in their frequency and severity.”

The trafficking of weapons is another urgent issue. The report notes that “illegal weapons are responsible for more than 70 percent of murders in the Caribbean.” It adds that the illegal trafficking of weapons has become “both the currency and commodity of the drug trade, having evolved into a major independent criminal activity.” In 2012, the government of Jamaica and the United Nations Office for Disarmament Affairs established a program to address this issue. The initiative included the training of 60 Jamaican security officials to better combat the trafficking of illegal weapons, as well as the subsequent destruction of seized, obsolete, and surplus firearms.

The fact that most Caribbean states outside Cuba have Washington-friendly governments assures bilateral and multilateral security cooperation initiatives for the immediate future. Even Caribbean states like Belize, Saint Lucia, and Suriname that have joined Petrocaribe—a bloc founded in 2005 by the late Hugo Chavez to expand Venezuelan influence throughout the Caribbean by using his country’s oil reserves as diplomatic leverage—have maintained cordial ties with the United States.

Thanks to these amicable relations, the United States Southern Command (SOUTHCOM) has been able to arrange joint security operations through accords like “shiprider agreements,” which essentially allow U.S. Navy and Coast Guard vessels to enter the territorial waters of Caribbean states in pursuit of suspicious vessels. Moreover, SOUTHCOM officials regularly meet with their Caribbean counterparts, as exemplified by last September’s meeting at the IMPACS headquarters in Port-of-Spain.

Future U.S. military intervention in the region, however, may be hindered by decreases in the U.S. military budget, so it would behoove Washington to consider non-militarized alternatives.

It’s plenty appropriate for the United States to help its Caribbean partners combat regional crime, should they desire it. But in focusing on drug trafficking, Washington has prioritized its own agenda over the issues that matter most to Caribbean communities. Improving intelligence sharing, creating more effective disaster management strategies, and devising a strategy to contain the arms trade and human trafficking, as proposed by IMPACS, would do worlds more for regional security than sinking more resources into drug busts and other short-term victories in the decades-long drug war.

W. Alejandro Sanchez is a Senior Research Fellow at the Council on Hemispheric Affairs. Follow Alejandro via Twitter.