Sports are helping bridge the gap between the United States and North Korea.
By Erik Leaver, Karin Lee | July 30, 2008

You may wonder why the second week of October 2007 was proclaimed “National Tae Kwon Do Week” in Cedar Rapids Iowa. Here’s one good reason: That week, in the middle of a Cedar Rapids auditorium, eight people crouched shoulder to shoulder to form a human hurdle, like the row of cars that a stuntman jumps with his motorcycle. Another person stood at the far end of this human chain, holding up a small pine board. With only a short running start, his teammate leapt over all eight people and broke the board with his feet before landing.

Such feats of athleticism, performed by the North Korean National Taekwon-Do Demonstration Team during their Good Will Tour of the United States, prompted not only admiration from Taekwon-Do fans and Korean American communities across the nation, but also earned it official recognition in Cedar Rapids. 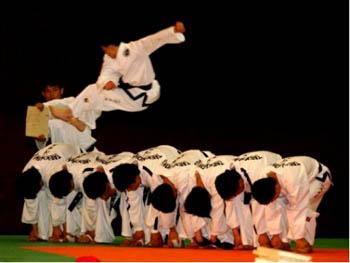 Photo from the Good Will Tour Website
sponsored by the TaeKwonDo Times.

When the Demonstration Team from the Democratic People’s Republic of Korea or DPRK (the official name of North Korea) visited four American cities last year, they joined a rich history of sports diplomacy. This tour, which attracted very little publicity, nevertheless had a positive impact that continues to ripple outward. Contacts between the United States and North Korea remain few and far between, particularly at a people-to-people level. For these two countries to achieve the level of exchange now enjoyed between the United States and China, sports exchanges will play a vital role – just as they did in the 1970s with ping-pong diplomacy.

Cultural diplomacy is as old as explorers and traveling merchants who were “early cultural diplomats,” according to the Institute for Cultural Diplomacy. It wasn’t until 1921, with the creation of a cultural department in the German Foreign Office, that cultural diplomacy became a state enterprise. Through cultural exports, the German government hoped to improve its image abroad; the United States soon followed suit by sending jazz musicians such as Dizzy Gillespie on tour. Between the individual traveler and the “cultural propaganda” funded by governments lie privately funded initiatives in art and sports, such as the New York Philharmonic’s trip to the DPRK in February of this year and the NBA-hosted U.S.-Iranian Basketball games taking place this summer.

The power of cultural exchange to build bridges between two countries is epitomized by “Ping Pong Diplomacy.” American athlete Glenn Cowan, having missed his bus after a practice session at the 1971 World Table Tennis Championships in Nagoya, Japan, stumbled onto the Chinese team’s bus. The 19-year-old Cowie was startled to find himself facing a bus full of bewildered Chinese athletes. Nonplused, he immediately began to defend his shoulder-length haircut. But then Chinese star Zhuang Zedong, determined to follow an edict from Chairman Mao to distinguish between the American people and their policy makers, decided to offer Cowan a gift. Afterwards, Cowan responded positively to a journalist’s question on whether or not he wanted to visit China.

First, however, the two athletes had to win the approval of their governments. Zhuang initially got in trouble for failing to obey another of Mao’s edicts: do not to talk to the Americans. Eventually (and the details vary on how) the Chinese extended an invitation to the American team, and Mao commented that Zhuang was good at both ping pong and diplomacy. Then the U.S. government waived government regulations against travel to the Communist nation for the team – although some in the U.S. government wanted to bar Cowan, fearing the drug-using “hippie opportunist” (as he had been described by one disgruntled U.S. government official) would not make a good impression. But the American delegation – team members, as well as officials, spouse and press – were all warmly received, Cowan included. At a magnificent reception Zhou Enlai stated “Your visit has opened a new chapter in history of the relations between Chinese and American peoples.” The United States lifted a twenty-year trade embargo the same day. In part riding on the good will generated by the Ping Pong team’s trip, President Nixon visited China the following year.

No sports diplomacy since has rivaled the 1971 table tennis tour for attention garnered or impact credited. And yet such diplomacy is vigorously in play. Sometimes it signals an increasing openness on the part of one or another of the countries, such as the 1989 visit to the United States of the Soviet national baseball team. Other times it is intended to maintain some level of people-to-people relationships despite the withering of official interactions, such as the visit of U.S wrestlers to Iran in January 2007. Government-initiated efforts are still robust; the United States sends American Public Diplomacy envoys Cal Ripken Jr. and Michelle Kwan around the world to speak the “universal language of sports.” While such interactions don’t necessarily open up “new chapters of history,” they do have an important impact, as illustrated by the Taekwon-do Demonstration Team’s experience.

Last October’s tour was probably the biggest cultural exchange between the United States and the DPRK at that time. The delegation of twenty North Koreans, including Captain Pae Nung Man, a translator, and guides, toured five cities during their two week tour of the United States. All together, 13,000 people saw the hour-long Taekwon-Do demonstrations, which were accompanied by other entertainment such as Korean folk dances. In Los Angeles, they were cheered by a sell-out crowd of 4,000 before going on a VIP tour of Universal Studios. At their next stop, they used the beautiful San Francisco Bay as a backdrop for their Taekwon-Do poses before they headed south for a visit to Silicon Valley. In Cedar Rapids, after an unexpectedly large turnout of 1,700 people required a last-minute change in venue, they visited a 280-acre hog farm and enjoyed a celebratory pork roast.

In Louisville, the North Korean team performed as part of the opening ceremony for the 21st Annual Taekwon-Do Tournament held by the Hwang Martial Arts School – a tournament that drew 1,000 competitors from all over the United States as well as several other countries. Despite the demands of the tournament, they still found time for a Kentucky barbeque. In Atlanta, they visited the regionally famous Stone Mountain Park, where they could enjoy magnificent vistas and entertainment, as well as Coca Cola World, and the Atlanta Aquarium. And all along the way they were warmly welcomed, hosted, chauffeured and feasted by friendly and generous Taekwon-Do buffs and Korean American families.

In this case, the Good Will Tour strengthened an existing cultural bond. Taekwon-Do is the national sport and National Martial Art on the Korean Peninsula, and according to Master George Vitale, the greatest number of Taekwon-Do practitioners are in the United States. Taekwon-Do is also believed by some to be the most practiced martial art style in the world.

With this background, American Taekwon-Do fans were able to appreciate North Korean expertise. The audiences responded enthusiastically to the team’s incredible athleticism. Master Vitale, who has visited over 30 countries around the world studying and promoting Taekwon-Do, confessed to me “I have been to dozens of Taekwon-Do demonstrations and [by this time], they bore me to death.” But this one was different, he explained. “They were moving in perfect unison. I’d never seen anything like it.” According to Vitale, their precision, synchronization and athleticism were so stunning that filmmakers in the LA audience jokingly offered the team jobs as stunt men on the spot.

But the audience wasn’t made up entirely of Grand Masters; even non-experts could respond to the team’s sense of humor. According to Walter Keats, who drove four hours from Chicago to Kentucky to see the performance, one of the team’s skits began with one of the female team members waiting for her nerdy date. When he finally shows up, they argue over his late arrival, until bullies come and attack them. The man makes a few ineffective attempts at self-protection, only to be knocked aside. It’s then up to the woman to vanquish the bullies, while her date cowers on a chair to avoid the fray. Only when the bullies are safely “knocked out” does the date risk a few blows at their motionless bodies.

Cultural diplomacy can be particularly meaningful when hosted by Americans who strive for reconciliation between their birth countries and the United States. For Grandmaster Woo Jin Jung, the October 2007 Good Will Tour was the realization of a long-held dream. When announcing the tour, he wrote: “I have long hoped and tried to sponsor the North Korean National TaekwonDo Demonstration Team to the USA. I am not a political person. I am just one TaekwonDo person who came from South Korea and settled down in the U.S. by teaching TaekwonDo. I have desired to contribute to peace and unification through TaeKwon-Do. Nothing more, nothing less.” 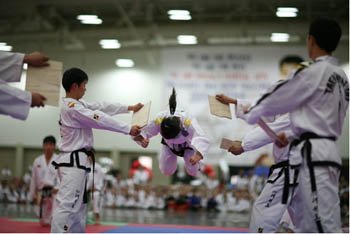 Photo from the Good Will Tour Website
sponsored by the TaeKwonDo Times.

And for the North Koreans the tour was eye-opening. In a message from the North Korean team, the team said, “The United States was so big and there were so many things to see and do. Our hosts showed us great hospitality and respect and for that we are thankful. It was wonderful to see the faces of Americans as they witnessed our demonstration for the first time and we thank you for your warm welcome. Everyone was so friendly and helpful as we toured the country. We send our deepest thanks.”

With a tour like this, there is no revolution in thought or values. However, people-to-people exchanges do bring incremental change. For those who participate, there is a new point of reference to add to the television images of nuclear weapons and ballistic missiles. The “mysterious enemy” is transformed into an astonishing athlete with a human face. Sometimes, as with the Olympics, such exchanges can translate dangerous hostility into acceptable rivalry. Other times they can help to create or affirm a common cultural vocabulary. While they may not lead directly to formal talks, as they seemed to do in 1971, they can help create a positive atmosphere that fosters or supports on-going dialogue. Ultimately, exchanges such as these prepare the people in both countries to work toward and sustain peace between their respective governments.

Author’s note: The name “Tae Kwon Do” is a transliteration of the Korean words Tae, to strike with the foot; Kwon, to destroy with the hand, and Do, way or method. It is variously transliterated as Taewondo, Tae Kwon Do, TaeKwonDo, etc. This article uses “Taekwon-Do,” the transliteration used by the North Korean team, except in quotations in which other transliterations are used.

Karin Lee is the executive director of the National Committee on North Korea (NCNK) and a contributor to Foreign Policy In Focus. Views expressed in this article are the author’s own, and are not necessarily endorsed by NCNK and/or its individual members.