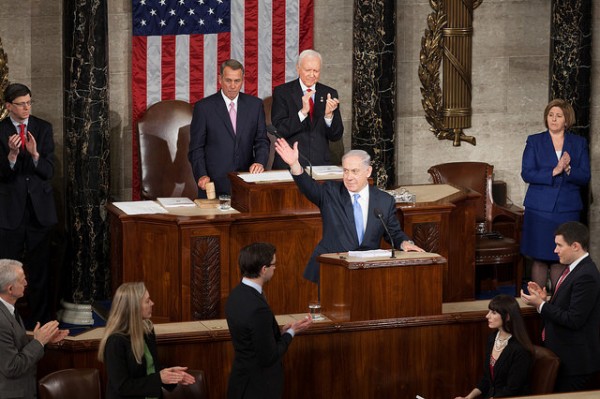 When Bibi Came to Town

Nearly 60 lawmakers did the right thing by skipping the Israeli prime minister's speech on Iran.
By Peter Certo | March 4, 2015

When Benjamin Netanyahu looked out over the joint session of Congress that had assembled to hear him speak on March 3, the Israeli prime minister almost caught a glimpse of something unusual: empty seats.

That would’ve been a rarity in Washington, where bipartisan support for the Israeli government runs deep. Just a few years ago, Netanyahu packed the house for a controversial speech on Israeli-Palestinian peace talks.

That left Republicans scrambling to fill the seats with staffers and allies. They even awarded a plum front-row gallery spot to GOP mega-donor Sheldon Adelson.

Netanyahu had come to harangue lawmakers about the ongoing nuclear negotiations between Iran and a group of countries led by the United States.

The talks are aimed at restricting Iran’s nuclear enrichment activities and allowing international inspections of its nuclear facilities. In exchange, negotiators are offering Tehran relief from sanctions that have badly damaged its economy.

Well, that’s not how Netanyahu sees it.

The hawkish prime minister, who happens to be facing an election very soon, thundered to Congress that the proposed deal would “guarantee” that Iran develops a nuclear bomb. He even alluded to the Holocaust, implying that a deal with Iran would threaten Israel’s survival.

The Democrats who skipped the speech mostly hemmed and hawed about procedural matters. They complained that House Speaker John Boehner, a Republican, had violated protocol by not consulting President Barack Obama before inviting a foreign leader to speak.

A few others fretted that Boehner was turning Israel into a partisan issue by forcing lawmakers to choose between Netanyahu and Obama — who, just last January, threatened to veto any legislation designed to sabotage the negotiations.

Obama himself skipped the speech too, citing a policy not to meet with foreign leaders so close to their own elections. Vice President Joe Biden drummed up a scheduling conflict in Guatemala.

Maybe they’re all just too polite to mention the best reason for skipping: Netanyahu is simply wrong about Iran.

For one thing, there’s nothing inevitable about Iran developing a nuclear weapon. As far back as 1992, Netanyahu predicted that Iran could have a bomb within three years. Nearly 25 years later, Israel itself remains the only nuclear-armed state in the Middle East.

That didn’t stop Netanyahu from selling the same snake oil about Iraq in 2002. The Israeli parliamentarian told Congress there was “no question whatsoever” that Saddam Hussein was developing nuclear weapons .

“I guarantee you,” Netanyahu promised, that toppling the Iraqi leader “will have enormous positive reverberations on the region.”

And this is the guy Congress is calling in on Iran?

U.S. intelligence agencies concluded back in 2007 that Iran had long since abandoned any attempts to weaponize its nuclear program. The surest way to keep it that way is to cut a deal.

If Iran feels secure in its relations with Washington — and remember, the United States has invaded countries to both Iran’s east and west in recent years — then it’s less likely to contemplate developing a nuclear deterrent in the future.

A successful agreement could bring a measure of transparency to Iran’s enrichment program, ensuring that Tehran is telling the truth when it says that it’s only interested in nuclear power. It could also — maybe — bring about an end to the 36-year estrangement between Iran and the United States.

We tried it Bibi’s way in Iraq. The next time he drops by Congress to offer more advice, let him tell it to a few more empty seats.