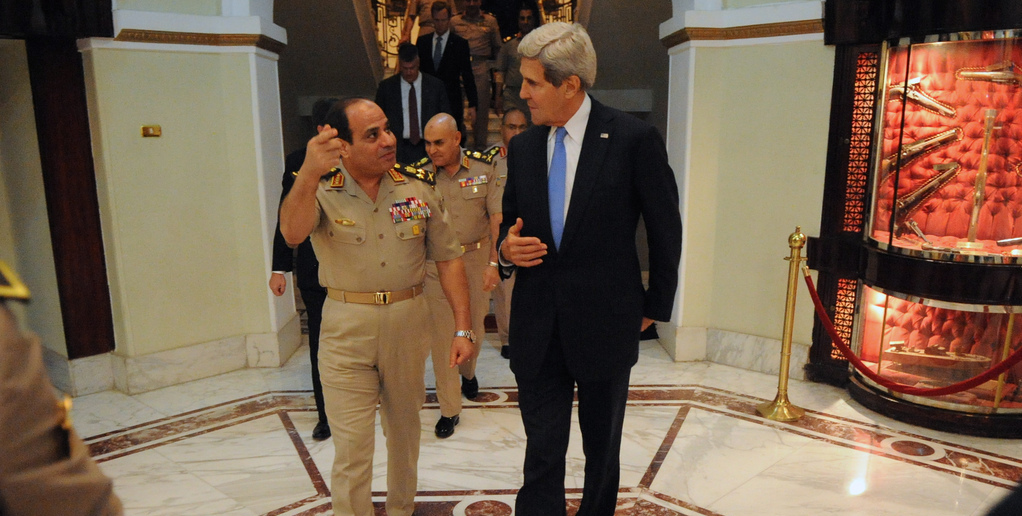 Bilateral Complicity: The Next U.S. President and Egypt

Washington sends over a billion dollars to Egypt every year. Will the next president demand a better human rights record in return?
By Ryan Suto | September 22, 2016

The current US presidential campaign debate on Middle East policy has focused disproportionately on the US response to the Islamic State (ISIS or IS). This series will focus instead on five alternative Middle East policy challenges facing the next president. This third part discusses the future of bilateral relations with Egypt. See part one on Iraq and part two on Tunisia.

Earlier this month, the Egyptian state froze the financial assets of both individuals and organizations engaged in human rights advocacy, including the Cairo Institute for Human Rights Studies, the Hisham Mubarak Law Center, the Egyptian Center for the Right to Education, and their organizational leaders. This is merely the latest episode of President Abdel Fattah al-Sisi’s suppression of dissent within the largest Arab country. The government has cracked down on the Muslim Brotherhood, April 6 and other activist groups, journalists, labor unions, and nearly any organization accused of criticizing the president or the state.

Since 2014 al-Sisi and his allies have enacted problematic legislation on elections, terrorism, and non-profit organizations, among others. With the help of a complicit judiciary, these laws have created a largely rubber stamp parliament and have resulted in an estimated 60,000 political prisoners in Egypt. In 2016 alone, two toddlers have stood trial.

The US response to these developments in Egypt has been mixed, at best. Following the ouster of the democratically elected, though deeply flawed, Mohammed Morsi, the Obama administration suspended Washington’s large annual aid package of over $1.5 billion to Egypt in October 2013. To regain the financial and military aid, Egypt had to follow a “roadmap” to democracy. Less than 18 months later, the United States restored the aid despite no real steps toward democratic governance or widened civic participation in Cairo. Washington remains unsure how the aid has been spent.

Moreover, during those 18 months, Saudi Arabia pledged to substitute more aid to cover what the US cut, amounting to $4 billion. Beyond some strongly worded statements and diplomatic finger wagging, al-Sisi’s government has faced no concrete pushback from major allies for orchestrating the overthrow of a democratic government and establishing a regime intolerant of dissent and abusive of human rights.

As the Obama administration approaches its last winter, the future of US-Egypt relations inevitably hinges on the disposition of the next commander-in-chief. Against the advice of the DC think tank community, both major party candidates met with al-Sisi this week during the UN General Assembly session in New York. Notably, Republican nominee Donald Trump’s post-meeting release emphasized maintaining strong bilateral relations with Cairo but made no mention of human right or democracy.

In contrast, Democratic nominee Hillary Clinton raised concerns about both the rule of law and civil society in Egypt, mirroring statements released earlier this year by Secretary of State John Kerry. But Clinton prefers working within the status quo of Egypt. During the Arab Spring protests, she cautioned Barack Obama not to support the ouster of former Egyptian President Hosni Mubarak. A Clinton White House is unlikely to depart greatly from the Obama White House on Egypt policy.

In general, human rights and good governance in Egypt take a back seat in Washington to counter-terrorism, safe passage through the Suez Canal, and peace with Israel. The most that can be hoped for in the next administration is the mitigation of the continuing oppressive authoritarianism of President al-Sisi, which will, if unabated, lead to increased violence and religious terrorism in the country and potentially beyond.

Indeed, research has shown that the quashing of religious liberty tends to breed religious terrorism, and legal and societal marginalization leads populations toward violence as a means to achieve their political goals. By banning and victimizing the Muslim Brotherhood, attempting to control religious interpretation, and marginalizing all political dissent within the country, al-Sisi risks turning Egypt into a breeding ground for terrorism and political violence. This reality will create headaches for countries throughout the Middle East, as well as subsequent US presidents. Ironically, Washington’s endless pursuit of stability at the expense of human rights will likely result in an Egypt with neither stability nor human rights.