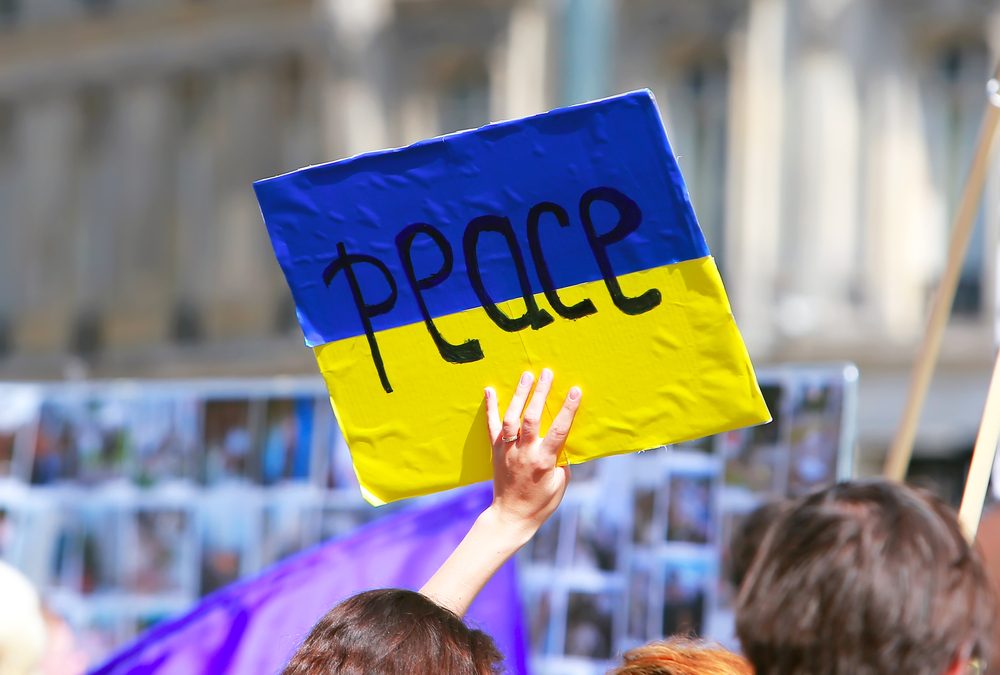 A peace demonstration in Ukraine (Shutterstock)

We need a progressive politics that shows solidarity with all victims of military violence — while resisting the militarism of our own government.
By Khury Petersen-Smith | March 29, 2022

The people of Ukraine are fleeing, suffering, and resisting in the face of an appalling and brutal Russian invasion.

The invasion is posing a challenge for progressives and people on the left—particularly for those of us located in the U.S. As we work to stand with the peoples of Palestine, Yemen, Iraq, Afghanistan, Somalia, Haiti, and many other places, we are also challenged to find ways to stand with the besieged people of Ukraine—who are facing an aggressor that is not the U.S.

But we live in a complicated and polarized world of international politics. Many of us are used to protesting our own government and its allies. And the U.S. government—with its ever-expanding wars and ever-ballooning military budget—and those of its allies, including Israel, Saudi Arabia, and the United Arab Emirates, give us no shortage of horrors to speak out against.

Indeed, the story of how Russia came to invade Ukraine requires looking at what the U.S. and NATO have been doing in Europe over decades, and especially in recent years.

But this time—and this invasion—demands that we break out of a binary view that sees the U.S. as the sole actor and other powers as merely responding. Yes, Russia is responsible for its invasion of Ukraine. But it is not solely responsible for the broader situation in Eastern Europe within which it launched the invasion—which has been shaped by the U.S. and NATO.

Similarly, it is glaringly insufficient to condemn the U.S. and NATO—though they are guilty of militarizing the region, and beyond—without starting with a clear condemnation of Putin’s Russia.

And lastly, in our efforts to be in solidarity with the people of Ukraine, we cannot uncritically accept moves by Western powers against Russia—from economic sanctions that hurt ordinary Russians, to weapons sales to Ukraine, to military action against Russia—all of which will inevitably harm the most vulnerable, rather than the most powerful.

In the U.S., whenever a government that is deemed an “enemy” by officials and the mainstream media commits a horrendous act, Americans are compelled to “do something” in response. And the “something” inevitably put forward by the U.S. government is military action, or action that will otherwise devastate the people of the “enemy” country.

Today, the U.S. and its allies—Canada, Japan, Britain, and other European powers—are celebrating their use of economic sanctions against the Central Bank of Russia and the exclusion of Russian banks from the SWIFT transnational interbank communications and currency conversion system.

In the weeks leading up to the invasion—and the Western deployment of sanctions—officials cheered their destructive power, calling them “nuclear” options and “the mother of all sanctions.” Now that they are in place, sanctions are predictably devastating ordinary Russians. The U.S. also openly debates imposing no-fly zones on Ukraine—in which U.S. and NATO jets would patrol parts of the country to repel Russian aircraft—all while the U.S. sends more troops to the eastern NATO countries.

But the idea that we have to either support military action and sanctions or “do nothing” is another false binary.

There are things people in the West can and should do.

We can, and should, demand that our governments open its doors to Ukrainian refugees—and to all refugees, actually, many of whom are displaced by U.S. violence and that of its allies.

We can, and should, support organizations working with displaced people from Ukraine directly.

We can, and should, call attention to the most vulnerable people in the crisis—including migrants in Ukraine and thousands of international students from Africa, China, and elsewhere—who have especially limited resources and harsh barriers as they, too, are displaced within and across borders.

And finally, we must support the people of Russia protesting Putin’s invasion from within.

What we cannot do is allow Washington and the leaders of NATO countries to use the current nightmare unfolding in Ukraine to justify more militarization and plans for future wars. Unfortunately, the path they are pursuing is precisely that: a more militarized world, with bigger military budgets and more weapons sales.

First, NATO, founded in 1949 to oppose the Soviet Union—but that remains in effect 30 years after the Soviet Union’s fall—is a nuclear-armed confederation whose member states were responsible for 56% of all military spending in the world in 2020. The scale of violence, should Russia and NATO come into direct conflict, has the potential to be even more staggering than what is currently unfolding.

Second, we should note that because the NATO states of Poland, Slovakia, Hungary, and Romania all border Ukraine, the current disaster has the potential to burn beyond Ukraine and escalate to a new level. Moreover, the Baltic States of Estonia, Latvia, and Lithuania—each of which is a member of NATO—all border Russia. Because of NATO’s mutual defense agreement, a military conflict with any one of these states could quickly escalate to one involving the whole alliance.

Third, NATO is doing its part to make such a catastrophe more likely—with Washington leading the way. The U.S. has deployed thousands of troops to NATO’s eastern countries in the weeks leading up to the Russian invasion.

Finally, NATO’s long-term expansionist plans are culminating in ways that raise the already-high temperature in the region. The U.S. is building its newest naval base—located in Redzikowo, Poland, just 100 miles from the Russian border—operational. The base will house weapons from NATO’s European missile defense system.

These measures, which NATO frames as “deterrence,” are precisely what make a conflict between Russia and the alliance so potentially catastrophic.

Putin’s justification of his invasion of Ukraine as a response to NATO’s militarism is cynical. There is nothing defensive or defensible about what Russia is doing. But NATO is responsible for militarizing Europe. It shaped the context in which Russia invaded, and it has put in place the pieces that could make the current war explode further.

After the end of the United States’ 20-year occupation of Afghanistan, and after two decades of the “war on terror,” this is precisely the time to critically evaluate the impacts of U.S. militarism and push for demilitarization.

Instead, Washington is doing the opposite, with Biden reportedly considering a record $770 billion military budget for 2023. Congress—which last year passed a military budget even larger than the president and Pentagon requested—is pursuing a bipartisan emergency spending bill that would further arm NATO and Ukraine.

European nations are similarly expanding their militarism. In a special session of the German parliament on Feb. 26, Prime Minister Olaf Scholz announced that his nation would sell weapons to Ukraine and increase its military spending to 2% of the country’s economic output. Upon his announcement, members of the parliament erupted in applause. The decisions represent a reversal from Germany’s long-standing policy of quieter military activity since World War II.

If, in response to the Russian invasion, NATO powers increase their military budgets, weapons development, and weapons sales, the effect will endure far beyond the point when the crisis in Ukraine is no longer making headlines in the Western media.

We urgently need a progressive politics that extends solidarity with the victims of military violence—no matter which state perpetrates it—and resists the militarism of our own governments. We must also reject the economic sanctions that the U.S. and allies are currently leveling against Russia. Sanctions—which officials often hold up as an alternative to war—are better understood as an act of war.

The activists in Russia who are protesting in the streets are showing us the way by defying their government’s actions, in spite of the risks to themselves, and denouncing war. We are challenged to do our part to build a movement across borders in solidarity with the many people facing war, in demand of a demilitarized world.