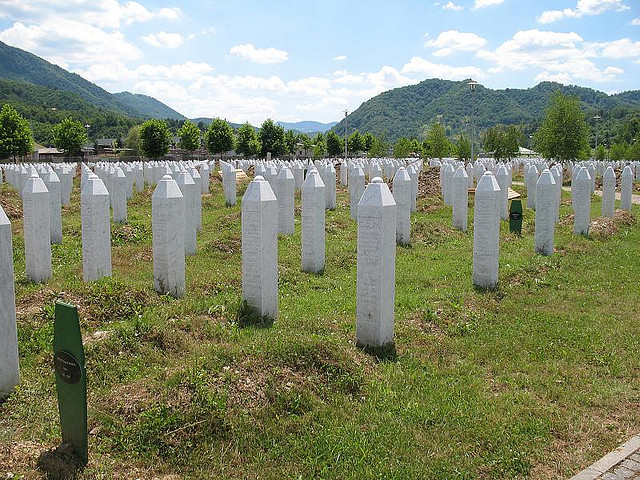 A Dutch court ruled that the Netherlands is liable for the murders of more than 300 Srebrenica victims. (Photo: Martijn Munneke / Flickr)

A Bittersweet Victory for Srebrenica’s Survivors

Nineteen years ago, more than 8,000 Bosnian Muslim, or Bosniak, men and boys were massacred in the small mountain town of Srebrenica in Bosnia-Herzegovina. The genocide, perpetrated by Bosnian Serb forces under the command of General Ratko Mladic, is the worst to occur in Europe since World War II. Even more devastatingly, these men and boys were essentially handed over to their deaths by the very people entrusted to protect them.

During the Bosnian war, Srebrenica was declared a safe area under the protection of the United Nations (UN). A Dutch peacekeeping force, the Dutchbat, was assigned to the area to safeguard the thousands of Bosniaks seeking shelter in the enclave. Yet, General Mladic’s men outnumbered the peacekeepers and as Srebrenica fell, the Dutchbat turned over the Muslims who were under their protection. The Serb forces would later go on to kill the male inhabitants of the town.

The process of recovering the victims has been a slow and painstaking journey, not least because of the sheer number of people who were killed. The Bosnian Serb forces had also used bulldozers to dig up the bodies and relocate them to other gravesites in order to conceal their crimes. To this day, bodies are still being discovered—175 were buried in this year’s commemorations in nearby Potocari.

A few days after the ceremony, a Dutch court ruled that the Netherlands is liable for the murders of more than 300 victims of the Srebrenica massacre. In its ruling, the court said that the Dutchbat “should have known” that the men and boys would be killed when they were handed over to General Mladic’s forces.

For the victims’ families, the decision is a bittersweet victory. The Mothers of Srebrenica, an association representing the massacre’s survivors, first launched the case in 2007. They demanded compensation from both the UN and the Dutch government, saying that both entities had failed to prevent the genocide in Srebrenica.

On this front, the Mothers might have achieved what they set out to do. In being liable for the deaths of 300 Bosniaks, the Dutch government is also responsible for any compensation related to the massacre.

However, there is one thing the Mothers desire more than money—justice. The Dutch might be legally responsible for their mistakes but the court did not hold the UN accountable because the organization has absolute immunity from prosecution. Furthermore, the July 16 ruling cleared the Dutchbat from the deaths of more than 7,000 men killed in and around Srebrenica, including those who fled the UN safe area into the surrounding forests before they were lured out by Bosnian Serb forces and into their graves.

The verdict is a striking reminder of how senseless the deaths of their fathers, husbands, and sons were. Many of those who survived the genocide had sought refuge with the Dutchbat. They were told that these men with the blue helmets were the people who would protect them from harm. Instead, they watched in horror as General Mladic’s men whisked away their relatives to be murdered while the Dutchbat did nothing.

Nearly 20 years later, the Bosniaks’ struggle for justice is far from over. Despite the well-documented facts, many Bosnian Serbs continue to deny what happened in Srebrenica. Many claim that the number of victims has been inflated, and local Serb governments and authorities have refused to acknowledge the genocidal nature of the tragedy.

The scars and distrust stemming from the Srebrenica massacre are deep and fresh. But for the mothers of Srebrenica, this small victory is the first step in ensuring that their loved ones are not forgotten.