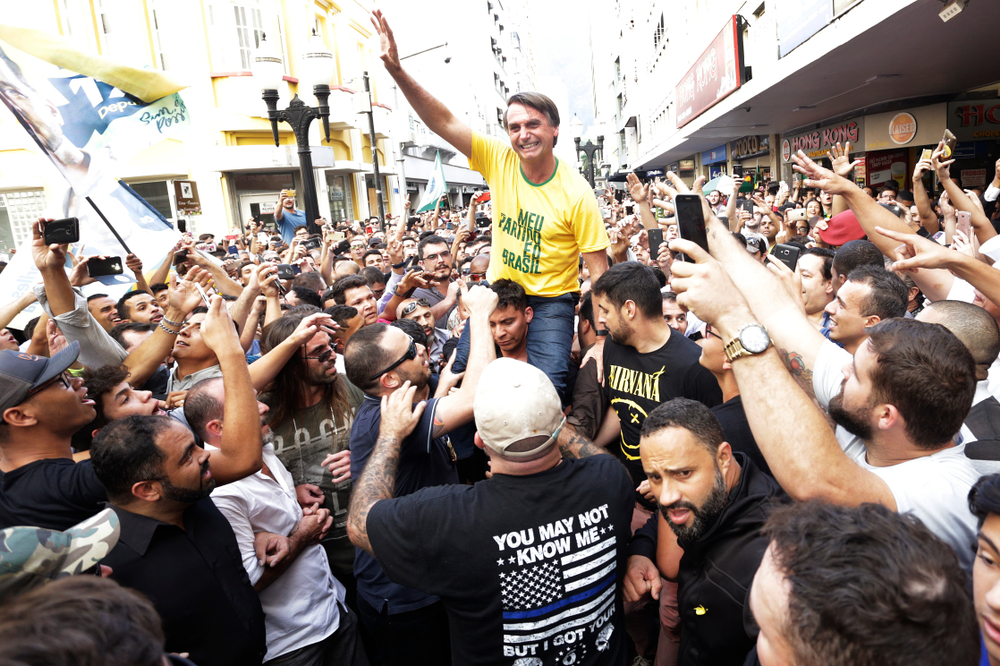 Bolsonaro Is a Threat to Brazil’s Democracy

The far-right leader’s flair for fascism recently included ordering a celebration of the coup that brought Brazil’s military dictatorship to power.
By Eugênio Bucci | May 8, 2019

Lying is on the rise in Brazil.

Right-wing president Jair Bolsonaro bets on historical forgeries and frauds to discredit the fundamental values ​​of our civilization — such as human rights, freedom, and the rule of law — and thus strengthen his ideology of intolerance. Democracy is at stake, though some still try to deny it. Through his absurd fabrications, the president works to broaden his supporters’ fanaticism and pave his way toward open authoritarianism.

The first came during his visit to Israel. On April 2, after visiting the Yad Vashem Holocaust Memorial Center in Jerusalem, he stated that Nazism was a leftist movement. Other members of his government agreed with him. The foreign affairs minister, Ernesto Araújo, had already said and written the same absurdity more than once.

No serious historian would accept the thesis of a “leftist Nazism,” of course, but Bolsonaro and Araujo don’t care about serious historians. They want to convince Brazilians that Hitler’s great crime was leading a leftist movement. His other mistakes were minor in comparison. Even the holocaust, as Bolsonaro declared on April 11, can be “forgiven.” What should never be forgiven — he did not say, but he strongly suggests — is being a left-wing partisan.

The second example of lies from Brazil’s head of government is equally serious. At the end of March, Bolsonaro and his spokesman repeatedly stated that the military takeover in Brazil in 1964 was not a coup, and that the regime implemented that year, which remained in power until 1985, was not a dictatorship. The whole world knows that it was indeed a dictatorship. Nevertheless, Bolsonaro ordered a military celebration on March 31 to remember with “due commemorations” the 55th anniversary of the coup.

At least once a week the government issues an absurd statement against known facts and history. These are not mere gross provocations. Whoever witnesses the performance of current Brazilian government may have the impression that everything is chaotic. But there is a frightening consistency in the lies the president has uttered. They are the essential nucleus of his power — they synthesize his intention to demoralize the culture of peace, the spirit of solidarity, and the institutional stability of a democracy.

Bolsonaro attacks the foundations of freedom and human dignity daily. He despises democracy.

What is under way in Brazil is a fascist project. The evidence is clear. The first step is the invention of a supposedly heroic past to animate the political manipulation of the present. Just like Mussolini did in Italy. Bolsonaro evokes a past that never existed: the heroic saga of the military that freed the country from communism. In his view, the regime that tortured, murdered, and censored did nothing more than save the nation from a leftist tyranny.

Another feature of fascism that the current Brazilian government has tried to copy is the use of military signs as the new state aesthetics. The Brazilian Republic today seems like a soldier in uniform, cap and boots. Bolsonaro does not wear a military uniform himself, but he salutes like a soldier and makes hand gestures imitating a gun. His government has already announced the goal of transforming schools into extensions of military barracks — with rigid discipline — and plans to rewrite the history of the dictatorship in school textbooks to, he says, teach “the truth” about the period.

The similarities between the government’s script and the book of fascism don’t stop there. The real and symbolic association between paramilitary gangs and Bolsonaro’s supporters is increasingly visible.

The “lifestyle” of Brazilian militias — illegal gangs formed by the military and criminal civilians who control services such as transport and cable television in vast areas of Rio de Janeiro, sell “protection,” and terrorize residents — dictate fashion among the Bolsonarist ranks. Government leaders imitate the ranting, the dress codes, the furious gestures of the militias and adopt their arrogant, intimidating language on social media.

The president himself is proud of his abusive style. His contempt for parliament isn’t just bad manners. It has the smell of Bonapartism. Insults against the judiciary have become a fad among some elements on the right.

The signs of fascism are everywhere in Brazil. An intense campaign to promote a repressive moralism on sexual behavior is well under way. The authorities celebrate the masculine universe as an ideal of control — and exalt feminine docility as a sign of obedience. Brazil is becoming dangerously similar to Mussolini’s Italy, where every man was urged to be “husband, father and soldier.”

Brazil’s foreign policy today is not focused on protecting the national interest. Instead, the minister submits all its strategy to the whims of Donald Trump, idolized by the Brazilian far-right as the new prophet of universal conservatism. The Foreign Ministry flatters Israel’s right-wing government, creating a malaise with Arab countries, the old strategic partners of Brazilian commerce. But Bolsonaro and his ministers think that the national interest has to bow to their ideas. They see themselves as the only and most genuine manifestation of the national soul.

The state-controlled lies factory encourages widespread violence, especially by the military, the state police, the paramilitary militias, and even the street police. Earlier in April, a group of soldiers in Rio de Janeiro fired 80 shots at a family car, without the slightest justification, killing an innocent man. The suspects were arrested, but Bolsonaro, on April 12, downplayed the crime calling it an “incident.” He said that “the army did not kill anyone”.

The praise for brutality has made firearms — which the government has already made easier to acquire — the newest amulet of a particularly savage virility, the mad virility that beats and kills women and homosexuals. As in any other fascist regime, the new government in Brazil must manufacture an enemy. The Bolsonaro’s doctrine has identified those it will fight in the name of the homeland, God, and the family: socialists, artists, gays, teachers, transgender people, intellectuals, and journalists.

The government’s worst lie is the promise that it will promote “reforms” for the common good. Some people believe that Bolsonaro is a “necessary evil” to promote a “cleansing” of the public administrations. Unfortunately, many Brazilians still do not understand that in politics, no end justifies any means; on the contrary, the means determine the ends.

They do not realize that virtue will not come from a ruler who offends history and who has no respect for the very law that allowed him to be elected. When he took office, he vowed to “uphold, uphold, and uphold the Constitution.”

Now, when he honors the military dictatorship in Brazil, he breaks his oath. Our Constitution, written in 1988, three years after the overthrow of the dictatorship, rejects all forms of tyranny. The president of the republic, in essence, does not agree with the general spirit of the Constitution.

These are dangerous times in Brazil. Either society stands up and restrains the president’s unacceptable impulses, or what is being swallowed up as a bad joke will poison our country. This is the truth in Brazil today. The rest is a lie. The rest is fascism.

Eugênio Bucci,  a Brazilian journalist, is a Professor of the School of Communications and Arts at the University of São Paulo (USP).