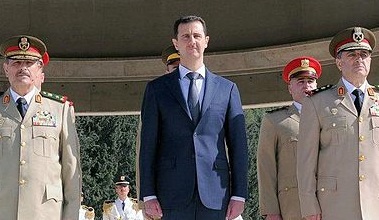 Bomb What Exactly in Syria?

Looks like the U.S. is once again reverting to its foreign-policy default position: bombing.
By Russ Wellen | August 27, 2013

Some of us have wondered why Syrian President Bashar al-Assad would drop tear gas in the suburbs of the seat of his government and his own home, Damascus. After all, the wind could blow the gas into his backyard. Nor did it make sense in light of how calls for intervention had recently died down. As Assad himself pointed out in an interview with Izvestia reported on by the New York Times:

… government troops would have risked killing their own forces if they had used chemical weapons. “This contradicts elementary logic,” news reports quoted him as saying.

In the coming days, officials said, the nation’s intelligence agencies will disclose information to bolster their case that chemical weapons were used by Mr. Assad’s forces. The information could include so-called signals intelligence — intercepted radio or telephone calls between Syrian military commanders.

If that’s a smoking gun to the administration, we need to be let in on that information immediately since

Administration officials said that although President Obama had not made a final decision on military action, he was likely to order a limited military operation — cruise missiles launched from American destroyers in the Mediterranean Sea at military targets in Syria, for example — and not a sustained air campaign intended to topple Bashar al-Assad, the Syrian president, or to fundamentally alter the nature of the conflict on the ground.

Best case scenario: Assad makes some conciliatory gesture to the West to protect his people from getting hurt. But he doesn’t seem to care about them anymore than the Obama administration does. From the Department of Thank Goodness for Small Favors, at least the administration seems to have its eye on military targets, not suspected chemical-weapons depots. Apparently, though, no such mercy would be shown Iran in the event we or Israel decided to attack: its nuclear-energy facilities would be targeted, releasing devastating radiation on the surrounding countryside.