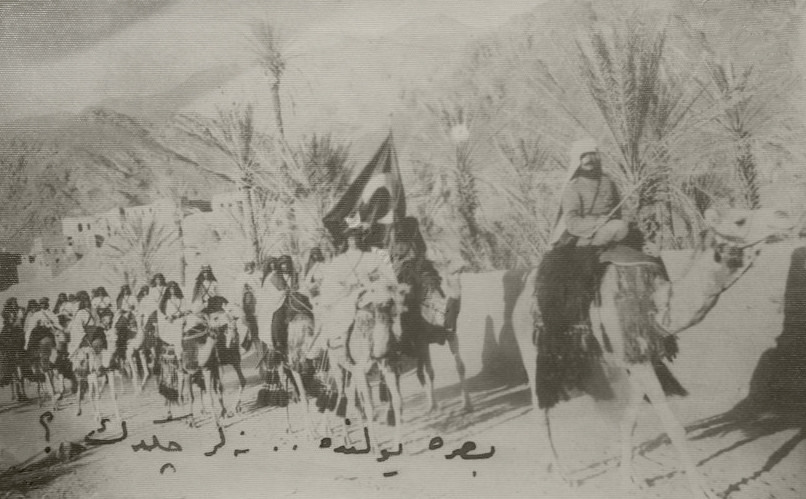 Ottoman soldiers march through Iraq in 1915, the last time the country fell under an organized caliphate. By intervening in Iraq now, the U.S. could be unifying ISIS' nascent caliphate just as internal divisions were starting to pull it apart. (Photo: Ottoman Imperial Archives / Flickr)

U.S. airstrikes are just the kind of outside force that will keep ISIS strong and unified.
By John Feffer | August 13, 2014

The last Islamic caliphate ended in 1924. Claimed by the Ottoman Empire in the 15th century, the caliphate saw its fortunes rise and fall with those of its imperial protectors.

When the Ottoman Empire expired at the end of World War I, the caliphate’s days were numbered. Never recognized in far-flung areas like Somalia or Malaysia or by the Shi’a and other minority communities, the Sunni caliphate didn’t represent the entire Muslim world any more than the Vatican spoke for all Christians. But it had great symbolic value, promising a kind of universal Muslim order that fused the religious and political spheres.

The weakened caliphate was no match for the modernizing nationalism of Kemal Ataturk, who built Turkey from the ruins of the Ottoman Empire. Ataturk drove a stake through the caliphate as one more proof that he intended to banish religion to the periphery of Turkish society. In 1924, The Economist declared the end of the caliphate with typical Eurocentric triumphalism.

“The repudiation of the Caliphate by the Turks marks an epoch in the expansion of Western ideas over the non-Western world, for our Western principles of national sovereignty and self-government are the real forces to which the unfortunate ‘Abdu’l Mejid Efendi has fallen a victim,” the magazine editorialized. “Both by tradition and by theory, the Caliph is an absolute monarch over a united Islamic world, and it is therefore almost impossible to find a place for him in a national state (whether it be called a republic or a constitutional monarchy) in which the sovereignty is vested in the parliamentary representatives of the people.”

The Economist spoke too soon. True, Turkey managed to hold together as a nation-state in the ensuing decades, preserving its territorial integrity by using considerable military force against its perceived enemies at home and abroad (including the “dirty war” against the Kurds and the battle with Greece over Cyprus). But the rest of what was once the Ottoman Empire continues to struggle to maintain traditional nation-states. Syria is trapped in a devastating civil war. Iraq has effectively broken into three or four parts. Israel and Palestine have fought for decades over borders and sovereignty. Western colonialism, followed by a counter-surge of Arab nationalism, failed to turn the Middle East into a durable patchwork of Westphalian states.

Meanwhile, the caliphate has returned with a vengeance. In what seems an impossibly short time, the Islamic State (IS) has challenged the borders of three nation-states—Syria, Iraq, and now Lebanon—and established its own caliphate in this territory. It has no patience for “our Western principles of national sovereignty and self-government” that The Economist proclaimed victorious 90 years ago.  It doesn’t even subscribe to the de facto multiculturalism that intermittently held sway during the previous Ottoman caliphate, under which Shi’ites, Christians, Jews, and members of other faiths lived in some approximation of tolerance for long stretches of time. Even al-Qaeda, which shares IS’s contempt for existing governments in the Middle East, hesitated to declare a caliphate because it hadn’t yet prepared the necessary groundwork. IS is nothing if not presumptuous.

IS doesn’t care what al-Qaeda thinks. Nor does it give a fig for the opinions of prominent Sunni scholars like the International Union of Muslim Scholars, which declared its caliphate “null and void.” And it certainly doesn’t pay attention to the blathering of infidels, a rather large category of humanity that includes Muslim apostates, all non-Muslims, and, naturally, that inheritor of “our Western principles,” the United States.

Now, if the United States doesn’t do something stupid—like bombing this newly declared caliphate and its army—IS will likely be consumed by the fires of its own extremism. All manner of groups fought alongside IS in order to defeat their common enemy—the woefully corrupt and dangerously sectarian leader of Iraq, Nouri al-Maliki. But IS signaled its inability to maintain a popular front of Maliki haters by recently rounding up former Baathists that had been fighting on their side and forcing them to swear allegiance to the new entity or risk execution.

With Maliki finally on the way out, further splits will take place within IS. Again, if the United States doesn’t do something stupid like…

The United States did something stupid.

The Obama administration’s newly restated doctrine—don’t do stupid shit—has just gone up in smoke. I’m not sure why Hillary Clinton has just chosen just this moment to observe that not doing stupid shit doesn’t constitute a foreign policy strategy. After all, what’s her alternative? The Hippocratic oath—first, do not harm—is a more politely stated version of the Obama doctrine. So, Clinton’s anti-Hippocratic approach logically amounts to: first, do some stupid shit. Now, with bombs falling again on Iraq, Clinton and Obama can be on the same page.

Let me be clear. I have zero sympathy for IS. I’d love to read its obituary and that of its cardboard caliphate as well. I also value what remains of the confessional diversity in the Middle East and do not doubt the genocidal urge of IS to wipe out anyone and anything that challenges its totalitarian views. But a campaign of U.S. aerial strikes to save one such pocket of diversity, in this case the Yazidis, is just the kind of outside force that will keep ISIS strong and unified in the absence of an obvious focus of hatred, as Maliki was.

I understand the pressure the Obama administration is under to do something to help the beleaguered Yazidis, not to mention the anemic Kurdish army to the north and all the Shi’ites and Sunnis in Iraq that want to push IS back into the Syrian petri dish that spawned it. The Republican opposition, of course, would like the Pentagon to apply even more force since it believes that IS, as John McCain opined, “is a threat to America.” (Has anyone commented on the irony of McCain making this statement from Vietnam, which for more than a decade was deemed a threat to America only to evolve, after years of senseless U.S. bombing, into a semi-ally in the cordon sanitaire against China?)

IS, like al-Qaeda before it, would love to be considered an actual threat to the United States. Such posturing, backed up by the use of unilateral force, elevates IS’s status to legitimate combatant. It changes the tagline of Uncle Sam’s terrorist recruitment poster into: I Want You to Join IS! It draws the U.S. government even further into a tangle of political and sectarian disputes that it only dimly understands.

Did Obama have a choice in the matter? Politically, he could have resisted Republican calls for the use of force by reiterating that the solution to Iraq’s problems cannot be military. He could have relied on the polls suggesting deep-seated American aversion to putting boots back on the ground in Iraq (though Americans seem to support air strikes). He could have ignored the near-unanimous consensus among Beltway pundits—i.e., the Washington Post’s editorial pages—that he was not providing sufficiently strong leadership on foreign policy issues. He could have swatted away the concerns of oil companies and their “national security” enablers worried about restricted U.S. access to Iraqi oil, particularly in the Kurdish north.

Well, it’s tough to imagine Obama pushing against this tide. Even more difficult to imagine would be the president taking real leadership by spearheading a UN effort to provide humanitarian relief to the trapped Yazidis and all the others who have been dispossessed by IS.

The United States, like other wealthy powerful countries, has a responsibility to act on behalf of civilians in perilous conditions. I don’t agree with those who point to all the other victims around the world to undercut any argument to extend assistance to some subset of sufferers. Internationalists have to come up with something better than such dilute relativism.

How about this: every time the United States allocates $1 in emergency aid for a specific group of people, another $1 goes to the overall foreign assistance pot until we finally get up to the 0.7 percent of GDP level adopted as the Millennium Development Goal for the industrialized world (currently, the United States spends less than half that amount).

Be realistic, you might object. What’s the point of dropping food and blankets into what could very well be merely a holding tank for those about to be executed? What about the use of force?

But even the generals are cautious about the use of unilateral force. Gen. Martin Dempsey, the chairman of the Joint Chiefs of Staff, recently stated that IS will ultimately be defeated “because pressure is placed on it from multiple directions and with multiple partners.  So this isn’t about us deciding that ISIL is the latest in a series of threats and taking it on unilaterally.”

But surely the atrocities committed by IS offer one of the strongest cases for the use of multilateral force for humanitarian purposes. Virtually no one is willing to go to bat for IS, and Iraq is welcoming outside intervention. If the Obama administration really wants to prove its leadership chops, it would help create a truly international mechanism, like a UN standing army, that can apply force to protect civilians. To get the support of all those concerned about anything that would compromise sovereignty, this mechanism would have to be explicitly stripped of any “regime change” aspirations.

But even if the option were available to use multilateral force to save civilian lives, the problem ISIS poses is not, as the administration previously insisted, a military one. The underlying problem is political: the blatant Shi’ite favoritism of the government in Baghdad and the long simmering Sunni grievances. It’s not the U.S. role to pick and choose governments for the Iraqis. But putting pressure on the new government to maintain a confessional balance in the distribution of political offices and public goods is something Obama can usefully do.

At this point, with the bombs already falling on the caliphate, it’s best to remind the administration that IS is like one of those creatures in a horror movie that only grows stronger the more drone strikes or artillery shells that it absorbs. The IS blob thrives in an environment of violence and conflict. Unless we remove the sources of that conflict—political and sectarian grievances—IS will only grow larger. And we will face that inevitability of the horror movie genre: an unfortunate series of endless, bloody sequels.