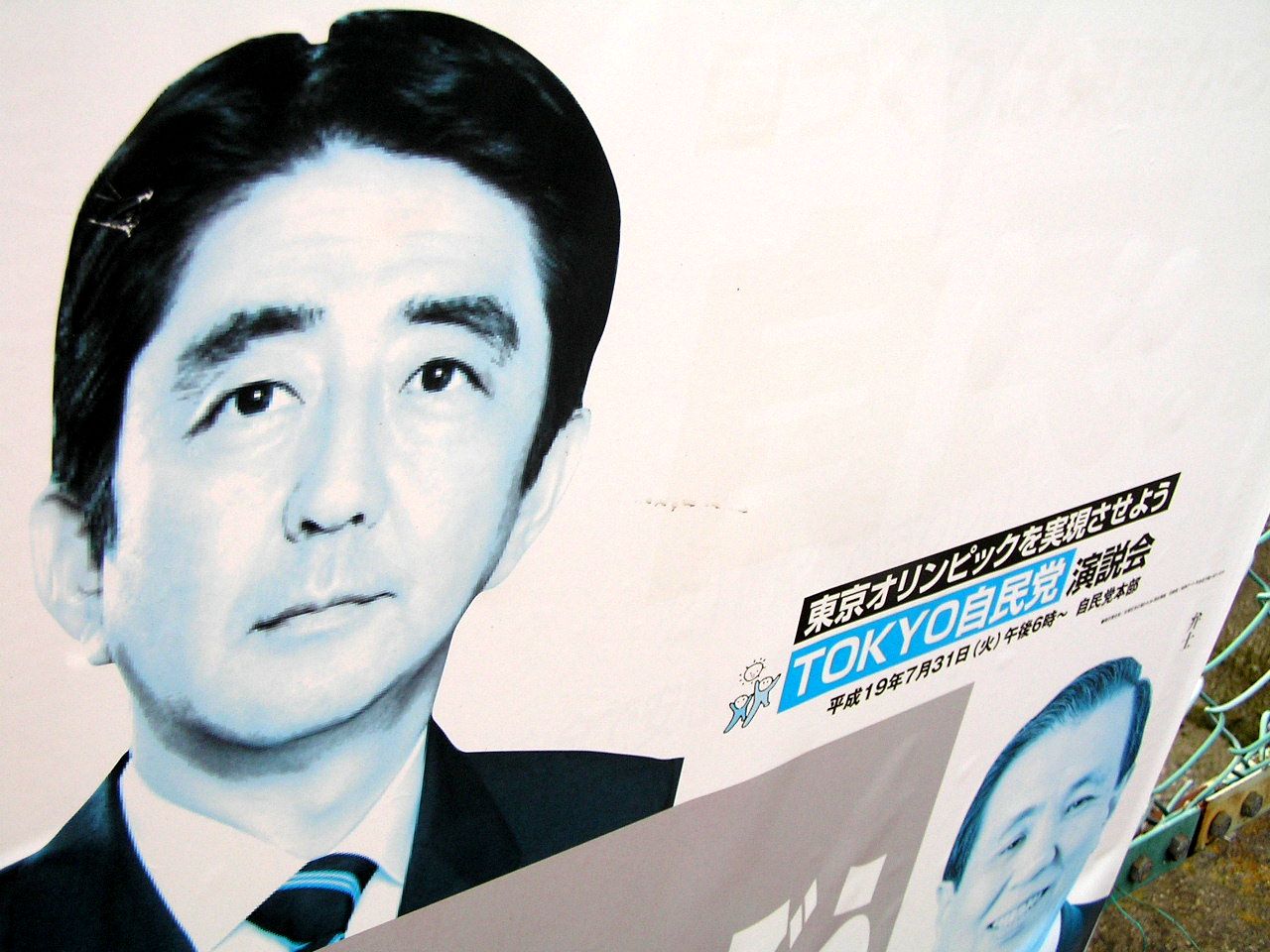 Shinzo Abe is back as prime minister, along with his special brand of Abenomics and a whole new politics of hype.
By Nancy Snow | November 15, 2013

The bull’s eye of Japan’s nation-branding campaign isn’t Hello Kitty or AKB48, the pop idol girl group whose short-skirted, candy-licking members could have originated from the imagination of a pedophiliac CGI artist. The cat without a mouth and the “idols you can meet” are making a few a lot of money, which is typically how everything operates in Japan. But those who focus on foreign affairs are less concerned with the growing omnipresence of Japanese otaku (geek) culture worldwide than with Brand Japan’s main attraction, Prime Minister Shinzo Abe.

Abe is the persuader-in-chief of Japan, and the whole world should be aware of his every policy move. Instead of an akushukai (handshake event) with pop idols, why not a meet and greet with the country’s CEO and main PR spokesman? Step right up and you might hear the famous refrain misattributed to P.T. Barnum about suckers and their prodigious birthrate.

Abe has managed to rebrand himself into a second coming of economic might in which the hopes and dreams of all the Japanese people must be invested.

What alternative do they have in this country, whose Liberal Democratic Party (LDP) has so dominated national politics since the mid-1950s that even Communists might be envious? (Ironically the Japanese Communist Party predates World War II, while the LDP originated in 1955.) The Left, after all, barely exists in Japan.

The 15-year-old center-left Democratic Party of Japan (DPJ) is all but a Dead Party of Japan, and the prime minister sits without any viable opposition in both houses of the Diet. Even the No Nuke activists of the 2012 Summer of Discontent have dwindled to negligible numbers that garner little press attention, despite the fact that Japanese public opinion remains overwhelmingly opposed to nuclear power.

What people care most about here, no different from anywhere else, is the old-fashioned pocketbook issue: the cost of living. Gas and electric prices are at historic high levels, while the 49,000-employee-strong and leadership-weak Tokyo Electric Power Company (TEPCO), which manages the Fukushima-Daiichi Nuclear Power Plant and serves 29 million households and businesses in Greater Tokyo, reported a hefty net profit of $6.2 billion for the first half of 2013.

It’s enough to make a small-d democrat’s head spin, except that living here now as I do, everyone seems to be going about their own business. Where is the public outrage? A quick study of civic participation in Japan is that the boiling frog has been slow cooking for the last two decades. During the country’s economic miracle decades of the 1960s through the 1980s, the world watched in amazement as the Land of the Rising Sun taught us all lessons in focused discipline and determination. All of us of a certain age can remember the fears of the economic superpower that might take over all the real estate in the United States. An oft-quoted illustration in the 1980s was that the estimated value of the Imperial Palace Grounds alone exceeded all the real estate in California.

At one time it didn’t matter whether or not the public had a voice in its representation. No one cared because everyone was reaping the rewards of Japan, Inc. But now everyone is too tired to care and too fiscally worried to act. Japan is a parliamentary democracy with a constitutional monarchy, but such a system cloaks the “shadow government” of certain handpicked industrial heavyweights that continue to work in concert with political elites. Bigger is always better in Japan when it comes to business-government relations, and this wealthy minority that owns stocks is getting wealthier.

Abe has an uncanny ability to remake himself, reemerging as Abe 2.0 after suddenly leaving office in disgrace in 2007 amid several political scandals. This time around he is receiving mixed reviews but plenty of attention abroad. At home his numbers are misleading. Although he personally enjoys 60-percent approval ratings and some people bizarrely believe that women wearing red lipstick again signals support for the Abe 2.0, only about one quarter of Japanese believe that Abenomics will positively impact their lives. Most experts see a widening gap between the haves and have-nots. The contradiction can be explained in a renewed nationalistic pride and domestic confidence on the one hand, and a sense that this is a last-ditch measure for Japan to recover from its 20-year reverse momentum on the other.

David Pilling of the Financial Times calls Abe’s second coming more Sauron, the evil necromancer, than Gandalf, the benevolent wizard. Nobel laureate Joseph Stiglitz sees promise in the prime minister’s risk-taking in a country where 73 percent of Japanese report that they avoid risk-taking. “There is every reason to believe that Japan’s strategy for rejuvenating its economy will succeed,” Stiglitz wrote in April. “The country benefits from strong institutions, has a well-educated labor force with superb technical skills and design sensibilities, and is located in the world’s most (only?) dynamic region.”

Nearly a year after Abe staged his comeback, many here are not so confident about this “dynamic” region shadowed by natural and geopolitical dangers. But Abe is wearing pinstripe suits and strutting confidence: “I am convinced our road is the only way,” he says.

The Japanese public is thinking along the lines from so far so good to shigata ga nai (it can’t be helped). Growth is up 4 percent in the first half of 2013 and the weakened yen has helped spur exports and huge profits for shareholders, but the middle class is getting squeezed. A good illustration of this is what Counterpunch writer Mike Whitney said about Abenomics. Break it down into 14 words: “Ferrari sales are going gangbusters in Japan, but beer sales have started to fizzle.” In Japan you are either uchi (in the group) or soto (outside the group). These days the uchi are driving fast cars.

TEPCO is the most hated Godzilla among Japan’s infamous nuclear village industries that put shareholders and bondholders before the public good but turn to the taxpayer for bailouts when things go bad.

People of little faith in nuclear power have to put their faith in a nuclear village leader like Abe, who has promised a radical restart of the economy through fiscal stimulation, loosening of monetary restrictions, and structural reform. This third element will be the hardest because Japan has no history of reforming its top-heavy industries that lie in bed with the ruling party. The Japanese people, for their part, are on the sidelines waiting to accept their fate, even while the Fellini drama of Fukushima and TEPCO incompetence dominates global news headlines. A government advisory council recommended that the Abe government take the lead in the Fukushima cleanup and decommissioning of Japan’s 50 nuclear power plants. Of course, government-led means taxpayer-funded.

Abe 2.0 is so confident that he confidently reassured the members of the International Olympic Committee that everything was “under control” at the Fukushima-Daiichi Nuclear Power Plant, the same week that radiation levels spiked and contaminated water continued to spill into the Pacific Ocean. On the heels of the winning bid for the 2020 Summer Olympics—a rhetorical show of confidence steeped in anything but reality—Abe is seeking to strengthen and expand state secrecy laws as part of his administration’s new national security framework that includes a more aggressive stance against its regional rivals.

Abe may be the main attraction these days in Japan’s nation brand to the world, but the global press is far more turned on by the growing misperception that Japan’s younger generation has stopped getting it on for real in favor of cuddle cafes and animated companions. In a casebook study of pack mentality that began with the The Guardian asking, “Why have young people in Japan stopped having sex?” and continuing through the BBC’s sophomoric documentary, “No Sex Please, We’re Japanese,” a good chunk of October was taken up with the world declaring Japan the most celibate nation on the planet. The term “Celibacy Syndrome” attached to Japan now has its own Wikipedia page, though without citations.

Thankfully Halloween arrived just in time for Fox TV in Japan to stage a “zombie walk” at Tokyo Tower in my Minato-ku neighborhood as a promotional tie-in for a new season of The Walking Dead. Casual observers could be forgiven for mistaking this publicity stunt for just another visual representation of Japanese politics.

Nancy Snow is an Abe/Social Science Research Council Fellow and visiting professor at Keio University’s Institute for Media and Communications Research (MediaCom). A contributor to Foreign Policy In Focus, she is completing a book on Japan’s nation brand image since 3/11. The Abe Fellowship is named after Abe’s father, Shintaro Abe, Japan’s longest serving postwar foreign minister who advocated closer ties between the United States and Japan.