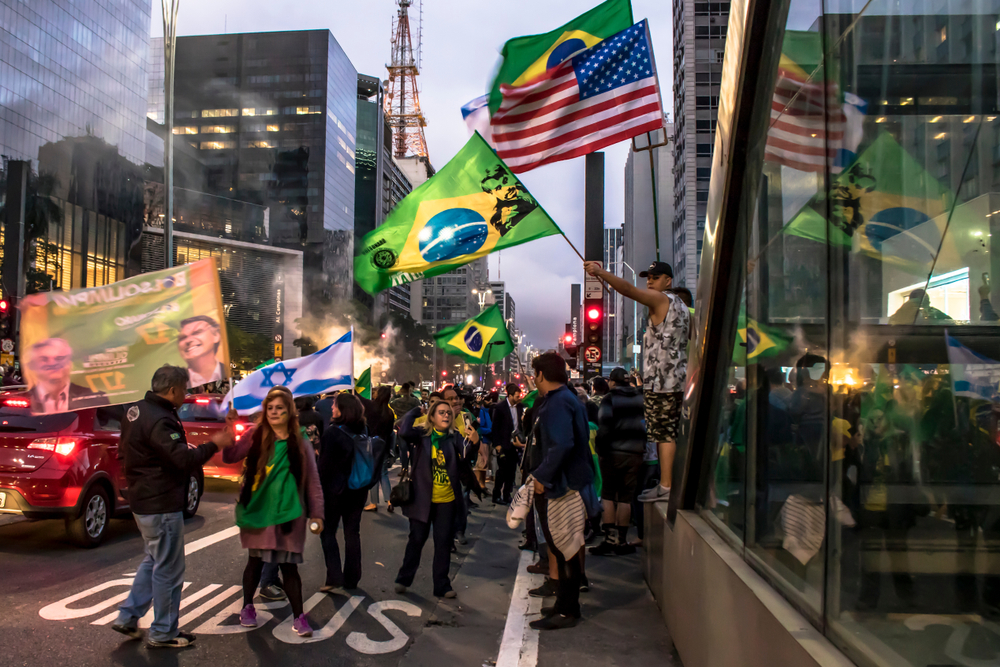 Under the far-right Bolsonaro, Brazil is abandoning its regional leadership to align with U.S. interests in Latin America.
By Helder do Vale | August 20, 2019

This title symbolizes the new, preferential relationship that Brazil has been pursuing with the U.S. as a result of the continued efforts by far-right President Jair Bolsonaro to inaugurate a new phase in Brazil’s global role.

Bolsonaro’s presidency has initiated deep changes in Brazilian foreign policy, which was traditionally based on multilateralism, non-interventionism, and a commitment to universal human rights. Bolsonaro’s abandonment of that traditional foreign policy is driven by his belief that despite changes in the world order, the future will remain U.S.-led — and, as such, a partnership with Washington is essential.

With this partnership, however, Brazil is relinquishing its position as a global leader to become a junior follower of Donald Trump’s foreign policy.

Ideological affinity is a major component of Bolsonaro’s foreign policy, which has had practical and immediate consequences for Brazil. For example, due to Trump’s trade war with China, Beijing has been downgraded in the priorities of Bolsonaro’s government despite being Brazil’s main trading partner, and opportunities to increase trade in Asia are now willfully overlooked.

Brazil’s prominent leadership role in Latin America is also being sacrificed as a result of its enthusiastic promotion of U.S. interests in the region.

Ideological Crusade and the U.S.

According to this worldview, Bolsonaro’s rise to power represents a unique opportunity to restore traditional moral values that will somehow help Brazil in its mission to save “Western Civilization” from decline. As such, a partnership with the like-minded Trump is imagined as a means by which to reaffirm the supremacy of the West.

These ideas form part of the broader ideological agenda which the current Brazilian Minister of Foreign Affairs, Ernesto Araújo, has put forward in various articles. In one of his most notorious pieces, a journal article entitled “Trump and the West,” Araújo lays bare the version of Brazilian nationalism he aims to pursue: a national mission to, in essence, recover Brazil’s “Western soul.”

The traditional nuclear family and Christian values — perceived as the hallmarks of “Western civilization” — are the central pillars of Araújo’s moral nationalism and, as such, should be seen as the foundation of Brazil’s new foreign policy orientation.

If Brazil’s new ideological position represents a stark renunciation of its previously active role in the building of a liberal world order, it is also becoming increasingly clear that the country will now abandon its previoously progressive contributions to solving major global problems.

As a consequence, Brazil will no longer be seen as a leader among developing countries — a widely-respected role that the country has played since 2003, when Brazilian governments prioritized South-South cooperation.

Brazil’s radical shift in foreign policy orientation is already causing shockwaves at home and abroad. Bolsonaro often flirts with the idea of potentially withdrawing from the Paris Environmental Accord, having already abandoned the Marrakesh Migration Pact. Additional uproar emerged in Brazil due to Bolsonaro’s close ties to Israel and his promise to recognize Jerusalem as its capital and to close Brazil’s embassy in Palestine. In the past, Brazil has systematically defended the creation of a Palestinian state, and was among the first countries to open an embassy in Palestine.

Being averse to both multilateralism and cooperation with developing countries, Bolsonaro seeks to keep his distance from the United Nations and the BRICS. More concretely, Bolsonaro considers the deepening or even the maintenance of established diplomatic ties with the BRICS group as detrimental to the new Brazil’s alliance with the U.S. Indeed, under Brazil’s new foreign policy priorities, China and Russia are now perceived as potential adversaries.

In attempting to recover Brazil’s “Western soul,” Bolsonaro’s government hopes to receive U.S. support in its efforts to become a permanent member of the OECD. The Trump administration has indicated that the U.S. will support Brazil’s bid to gain admission to the OECD.

In Bolsonaro’s evolving geopolitical map, Brazil is slowly abandoning its regional leadership to align with the U.S.’s interests in Latin America. In this context, Brazil’s engagement with other Latin American countries is mainly based on ideological affinity. Hence Brazil is showing interest in strengthening bilateral relations with Chile, a country that Bolsonaro admires principally due to his admiration for Pinochet’s brutal dictatorship (1973-1989), and with Argentina, with which bilateral relations remain warm as long as the conservative-minded President Macri remains in power.

Venezuela is, for quite different reasons, another important country for Bolsonaro. He uses Venezuela’s unrest to escalate the intensity of his rhetorical confrontation against the Venezuelan regime, which resonates powerfully with Bolsonaro’s supporters at home and abroad.

The rationale for and discourse surrounding Brazil’s blind alignment to the U.S. is facing heavy criticism from parts of Bolsonaro’s own government. These dissident voices can be heard in the agribusiness sector, the military, and the Brazilian diplomatic corps.

Operating as they do within a clear set of international interests, agribusiness is a pragmatic group of actors who understand that Bolsonaro’s rhetorical tactics are harming their international interests. Those who consider China a pivotal player in the expansion of Brazilian agricultural exports are understandably disturbed by Brazil’s increasing distance from the BRICS.

Parts of the Brazilian military also appear skeptical about Brazil actively positioning itself within the U.S. sphere of influence, believing this to be a blind alignment that could easily compromise the image of Brazil as a strong, autonomous country.

Bolsonaro’s foreign policy also faces opposition from within Brazil’s Ministry of Foreign Affairs, where career diplomats are increasingly voicing their concerns over the president’s wanton abandonment of the multilateralism that Brazil has historically and effectively used to engage with the rest of the world.

In an increasingly dog-eat-dog world, Bolsonaro hopes that Brazil can establish itself as a privileged U.S. partner. However, given the waning support for Bolsonaro’s foreign policy at home, as well as its fundamental lack of pragmatism, these radical shifts in Brazil’s international affairs may ultimately prove to be ephemeral.

Helder F. do Vale is an Associate Professor at Hankuk University of Foreign Studies in South Korea.