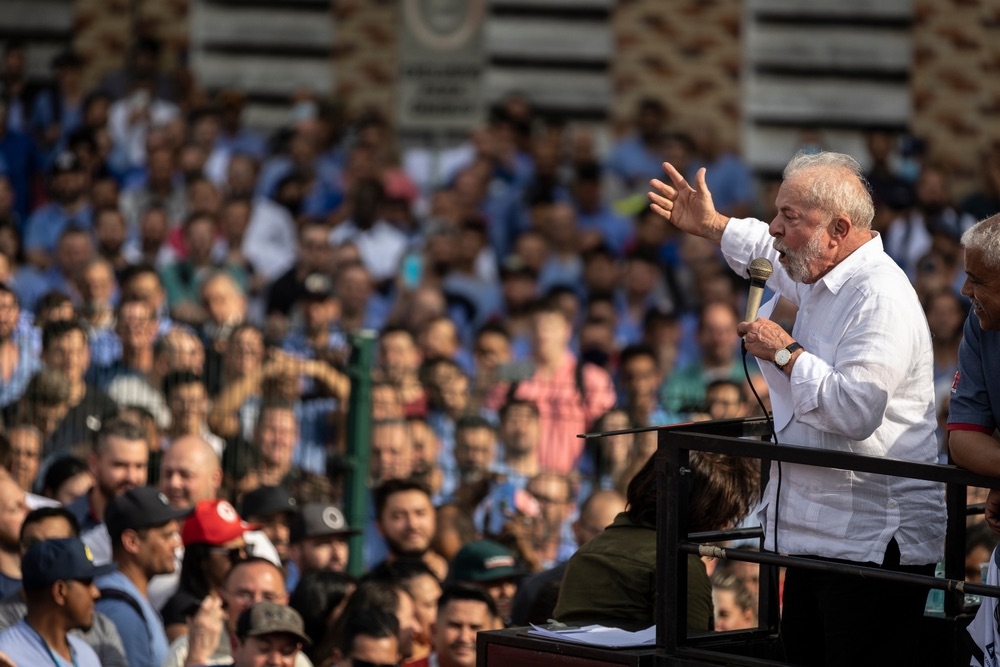 Lula knows better than most how to fight for the interconnected goals of democracy and economic justice. Little did Lula know how soon that fight would come.
By Omar Ocampo | January 10, 2023

While security forces have now regained control, Brazil’s insurrectionists rattled the foundation of the world’s fourth-largest democracy. Coming just a week after Lula’s inauguration, these attacks make chillingly clear the enormous hurdles he’ll need to overcome to achieve the pro-democracy, pro-worker agenda he’s been pursuing for nearly half a century.

A former metalworker, Lula rose up the ranks of the labor movement and helped launch the Workers’ Party in 1980 as an opposition force against the country’s military dictatorship. During his first two terms as Brazil’s president, which ran from 2003 to 2010, he had enormous success in reducing the economic gaps that had widened under military rule. In this, his third term, Lula intends once again to prioritize the poor and the working-class.

Just hours after his inauguration on January 1, he signed a provisional measure expanding the flagship anti-poverty program he introduced in his previous stint in office. Between 2003 and 2011, the Bolsa Família — roughly translated as the Family Grant — distributed monthly benefits that lifted 25 million people out of poverty. This program, combined with a minimum wage increase, expanded public investment in health care and education and other progressive reforms, reduced the country’s income inequality for the first time in four decades.

Bolsonaro replaced the Bolsa Família a little over a year ago with a much less effective program — called Auxílio Brasil (Brazil Aid) — that was purely a Trojan horse intended to reduce social spending by eliminating access to other welfare programs. Thanks to Lula’s immediate action, the government will deliver 600 Brazilian reais a month — approximately $112 U.S. — to 21 million families.

In another immediate action, Lula reversed Bolsonaro’s plans to sell off eight state-run institutions, including the Petrobras oil company and the public postal service. In scrapping his predecessor’s privatization plans, he aims to ensure these entities serve the public good rather than lining the pockets of corporate executives.

Lula has not yet submitted legislative proposals to Congress, but the Workers’ Party published a 90-point manifesto this past summer that gives us a glimpse of their other core priorities. Near the top is a commitment to revoking a federal spending cap to allow increased investments in fighting poverty and strengthening infrastructure. Lula has also vowed to strengthen trade unions and repeal a 2017 labor reform that exacerbated the growth in precarious work while failing to boost job creation.

Lula has also appointed a special secretary for tax reform to develop a proposal for a more efficient and equitable tax code. Brazil’s current system is notoriously complex and regressive as it places a heavier tax burden on the middle-class than those who sit at the top of the income distribution. Hopefully, Brazil will follow Colombia’s recent move and adopt a wealth tax as a central pillar of a more equitable tax code. An upcoming report co-authored by the Institute for Policy Studies estimates that a progressive tax on the assets of the richest 0.03 percent of Brazilians would generate $26.8 billion USD in 2023.

Before the attacks of January 8, the headlines about Lula’s challenges were focused on financial market jitters and worn-out conservative critiques related to his public expenditure plans. The Financial Times editorial board, for example, urged him to pursue “better, not bigger” government if he wants a strong and stable economy. Similar “fiscal responsibility” arguments thrown at Lula in his previous terms proved spectacularly wrong. But such arguments are usually driven less by sound economic analysis than by the interests of the rich and powerful.

With the headlines now fixated on the insurrectionist mob, Bolsonaro is reportedly in Florida. No doubt he was glued to the TV yesterday, watching the violence he had sparked by relentlessly questioning his country’s electoral process — just as Trump did two years ago.

What will happen now to Lula’s presidential dreams? At 77 years old, he is a man who lived through Brazil’s 1964-1985 military dictatorship and was even jailed in the 1970s for leading labor strikes. And so Lula knows better than most how to fight for the interconnected goals of democracy and economic justice.

“Join us in a great collective effort against inequality,” he told the massive crowd on inauguration day, before asking everyone to help ensure that “the hope of today ferments the bread that is to be shared among all, and that we are always ready to react in peace and order to any attacks from extremists who want to sabotage and destroy our democracy.”

Little did Lula know how soon those attacks would come.

Omar Ocampo is a inequality researcher at the Institute for Policy Studies.