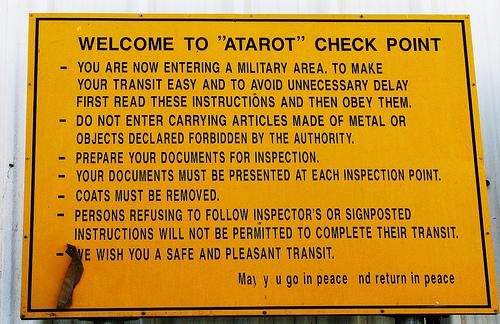 Breaching the Wall through Art

The wall that divides Israel and the occupied Palestinian territories is ugly and oppressive. It is far from a work of art. But now it is the subject of art.
By V. Noah Gimbel | June 6, 2011 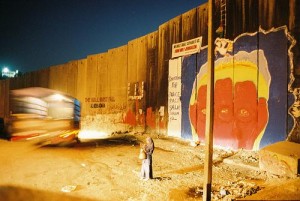 The wall that divides Israel and the occupied Palestinian territories is ugly and oppressive. It is far from a work of art. But now it is the subject of art.

The Jerusalem Fund Gallery’s new exhibition “Breaching the Wall” displays works of 11 different artists that reflect their feelings and artistic reactions to this eight-meter-high concrete wall that runs for 520 kilometers (64 percent of the planned length).

About a year ago, gallery curator Dagmar Painter contacted the artists – all of whom had exhibited solo at the gallery in the past –with the idea for the show. The artists produced their submissions using multiple media under various circumstances from a variety of locations. In the end, the strength of the collection lies in its diversity, reflecting the wide array of thoughts and feelings inspired by the concrete symbol of either oppression or security, depending on where you stand.

Approved for construction in 2000 by Prime Minister Ehud Barak, Israel broke ground for the wall in 2002. Approximately 85 percent of the wall is located within the West Bank on the Palestinian side of the 1967 Green Line. Entire villages have been literally walled in, centuries-old olive groves have been uprooted, homes have been razed, and hundreds of anti-wall demonstrators imprisoned over the last nine years.

The cost of the wall is estimated at $2.1 billion, and it has generated a multi-billion-dollar occupation industry that the U.S. government helps subsidize with its annual aid package to Israel. And despite a ruling by the International Criminal Court declaring the wall illegal and denying the Israeli claim that security concerns necessitated its construction, work on the wall continues to this day. For such an overwhelming challenge with truly global implications, art is a last refuge to theorize, resist, and overcome the wall’s imposed divisions.

Some of the artists in the show created works meant to communicate the isolation the wall imposes on the Palestinian people. In “Wall, Settlements, Village,” Rajie Cook filled a giant hollowed-out sycamore trunk with small cross sections of cherry tree branches, in the center of which he placed a found robin’s nest containing a hollow-eyed doll’s face. Thus are the prospects for childhood fantasy hollowed out in the Palestinian villages surrounded by fortified Israeli settlements and barricaded in by the wall. Photographer Michael Keating’s juxtaposes the image of a lone woman with the enormity of the wall. A truck flies by in a blur, and the spotlight of a military outpost in the distance beams down as though surveying a prison yard. There is a devastating beauty to the image, an alienating silence as loud as concrete.

Other artists interpreted the wall as a wound or a scar on the once-pristine landscape of rolling hills and olive groves, and a couple of artists sought to use the opportunity to dress representations of the wall in the vibrant patterns of traditional Palestinian textiles, fighting bleakness with color.

Still others take a more personal, psychological angle toward the conveyance of their feelings on the wall. John Halaka created images of a heart and a brain on maps of the West Bank and Gaza Strip with red and blue stamps that say “deny” and “desire.” Mary Tuma constructed a rope out of kefiya and women’s headscarves that is just long enough for two people on either side of the wall to climb up and meet at the top.

But the only piece done by a part-time resident of occupied Palestine was hardly ornate, and could scarcely be called beautiful. It greets visitors to the gallery at the door and 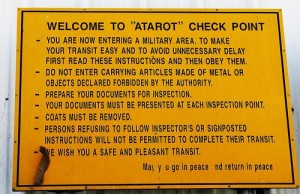 consists of 50 tiled images of the same photograph: the sign that dictates instructions for Palestinians going through the Atarot checkpoint. Monotony, tedium, bureaucratic rhetoric written in steel: this is what the wall inflicts on the everyday life of Palestinians under occupation.

Of course, the infinite possibilities for artistic interpretation of and resistance to the wall cannot all be displayed within a gallery space in the United States. Graffiti artists like Banksy have left lasting impressions on the wall and those who witness it. A multi-part film series available online, which focuses more on the local responses, also details the multifarious fusions of art and resistance in Palestine.

There’s not one way to interpret the wall, and that is the point of the show. But it is equally important not to condone its ugly existence, no matter how beautiful some artists’ renderings of its meaning may seem.