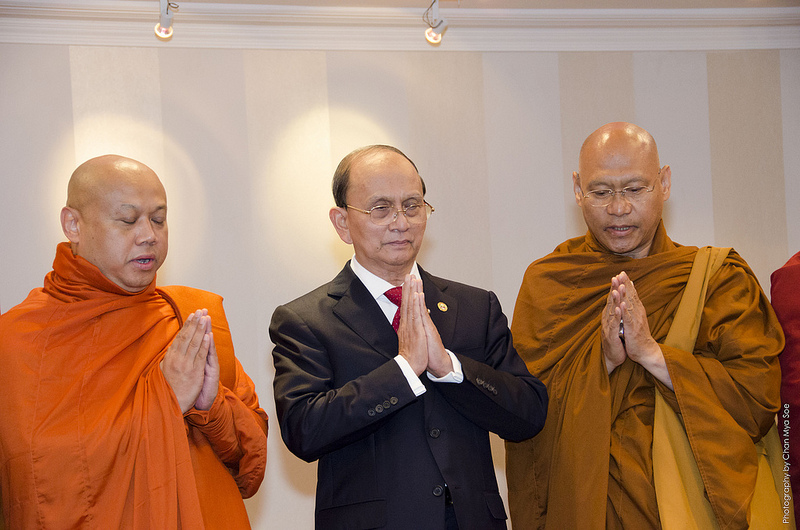 Democratic and political reforms in Burma have been uneven and halting.
By Daniel P. Sullivan | November 19, 2013

One year since that pledge and six months from the White House visit, only one of those commitments has been fulfilled, three have been virtually ignored, and efforts on the rest are mixed at best.

Here is what those 11 commitments are and where they stand today:

1. Allow the International Committee of the Red Cross access to prisons.

The International Committee of the Red Cross (ICRC) visited six prisons between January and June 2013 and recently visited prisons in Rakhine State. However, the ICRC agreement with Burma restricts it from publicly reporting on prison conditions. Many prisons remain unvisited, and many people are believed to be detained on military bases with no access to international monitors.

Despite President Thein Sein signing on to opening an office in November 2012, there has been no progress on its establishment.

3. Allow blacklisted people to enter and leave the country.

Over 2,000 journalists, critics, and others deemed a threat to national security were removed from Burma’s travel blacklist in August 2012, and 1,000 doctors were removed in October 2013. However, more than 2,000 people remain on the list.

4. Initiate a process to assess the criminality of remaining political prisoners.

A committee to identify remaining prisoners of conscience was established in February 2013, but its process has been obscure and criticized as politically motivated. Some 951 political prisoners are estimated to have been released since 2011, but another 135 remain. While President Thein Sein has pledged to release them all by the end of 2013, UN Special Rapporteur Tomas Ojea Quintana and others have noted new politically motivated arrests since that commitment was made.

While peace talks continue, a ceasefire agreement is yet to be reached in Kachin State. And just months after making this promise, in January 2013, Burma conducted aerial bombardment and shelling of civilian areas of Kachin State. Sporadic fighting has continued. While ceasefire agreements have been signed with 13 ethnic armed groups, sustainability remains largely in question.

Violence and discrimination towards Rohingya Muslims has continued in Rakhine state without any significant intervention from the Burmese government. UN Special Rapporteur Quintana noted in his last report that, “There is little evidence that the Government has taken steps to tackle the underlying causes of the communal violence or has put in place the policies that are necessary to forge a peaceful, harmonious, and prosperous future for the state.”

Humanitarian access remains restricted in conflict areas, including Kachin State and eastern Burma. The UN Special Rapporteur reports that he “remains concerned about the continuing lack of access by international humanitarian agencies to the more than 50,000 internally displaced persons in areas outside government control in Kachin State.”

The Burmese government joined the UN Convention against Corruption, enacted an anti-corruption law, and declared it will join the Extractive Industries Transparency Initiative. However, governance reform is still greatly lacking, and Burma continues to be listed among the most corrupt countries in the world.

The mixed results from Thein Sein’s 11 Commitments should give pause to President Obama one year from his historic visit. While dramatic reforms have begun in some areas, other areas, particularly regarding human rights, are clearly backsliding. Indeed, as United to End Genocide has warned, the dynamics behind the anti-Muslim violence over the past 18 months may constitute the building blocks of genocide.

Having already lifted nearly all of its economic sanctions on Burma as a reward for the start of reforms, the United States has given up much of the leverage it had over the Burmese government. One of the last significant leverage points is military-to-military relations. Continued reports of military abuses in Burma make this a particularly sensitive area. Given its unfulfilled promises and the danger of genocide in the country, the United States should not relinquish its last bit of leverage by increasing military relations with Burma.

Rather than rushing ahead to extend another set of rewards in hopes that they will spur further reform, President Obama should ensure that the commitments made to him a year ago, and reiterated six months later, are actually being fulfilled.

Dan Sullivan is the Director of Policy and Government Relations at United to End Genocide, the largest activist organization in America dedicated to preventing and ending genocide and mass atrocities worldwide.