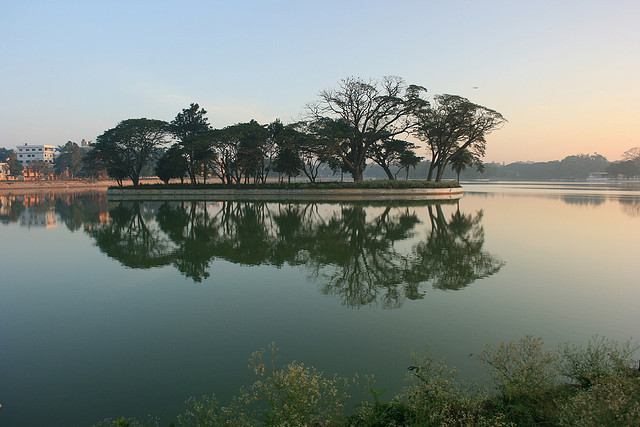 The aftershocks of the Bush administration just keep rolling in, this time in India.
By Russ Wellen | January 25, 2016

In December, the Center for Public Integrity published an investigative report by Adrian Levy titled Experts worry that India is creating new fuel for an arsenal of H-bombs. It was also published in Foreign Policy with the more alarming title India Is Building a Top-Secret Nuclear City to Produce Thermonuclear Weapons, Experts Say.

The Indian government has appropriated a large chunk of land in the southern Karnataka state to build a military complex of nuclear research laboratories and testing facilities. Also ostensibly intended to produce fuel for India’s nuclear reactors and submarines, it seems that, writes Levy

… another, more controversial ambition, according to retired Indian government officials and independent experts in London and Washington, is to give India an extra stockpile of enriched uranium fuel that could — if India so decides — be used in new hydrogen bombs (also known as thermonuclear weapons), substantially increasing the explosive force of those in its existing nuclear arsenal.

Bear in mind that because India never signed the nuclear Non-Proliferation Treaty (NPT),it’s a “rogue” nuclear nation like Pakistan, Israel, and North Korea, and not subject to inspections by the IAEA (International Atomic Energy Agency). Presumably, India seeks to build up its arsenal to counter Pakistan, right? Not necessarily. Levy:

Gary Samore, who served from 2009 to 2013 as the White House coordinator for arms control and weapons of mass destruction, said “I believe that India intends to build thermonuclear weapons as part of its strategic deterrent against China.”

The Bush administration’s deal of cooperation with India implemented in 2008 was controversial because India was not a signatory to the NPT. (Bear in mind that with all the heat we have kept on Iran for decades about its nuclear research, it’s a signatory to the NPT — just one we haven’t got along with.) Levy again:

Opponents of the deal complained … that it did not compel India to allow inspections of nine reactor sites known to be associated with the country’s military, including several producing plutonium for nuclear arms. The deal also allowed 10 other reactor sites subject to IAEA inspection to use imported uranium fuel, freeing up an indigenously-mined supply of uranium that was not tracked by the international community and could now be redirected to the country’s bomb program.

Given India’s “need to build up [its] nuclear deterrent arsenal as fast as possible,” it should “categorize as many power reactors as possible as civilian ones, to be refueled by imported uranium, and conserve our native uranium fuel for weapons grade plutonium production,” strategist Krishnaswamy Subrahmanyam, a longtime adviser to the Indian government, notoriously wrote in December 12, 2005, in The Times of India. [Emphasis added.]

Which is exactly what India is doing. Thank you George Bush for expediting thermonuclear weapons in the Indian subcontinent. Though the West might be able to dodge direct involvement in a nuclear war between India and China or Pakistan, the ensuing nuclear winter would have a devastating effect on the entire planet for years to come.