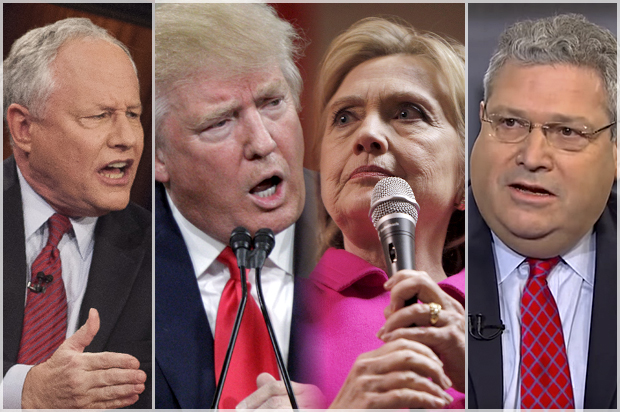 Washington's neocons are generally terrified of Trump’s unpredictability and his flirtation with the alt-right. They also support Clinton’s more assertive foreign policy, not to mention her closer relationship to Israel. (Photo collage by Salon.com)

Bush-Era Foreign Policy Delusions Are Alive and Well in 2017

In trying to unravel the debates over U.S. foreign policy currently being fought out in the editorial pages of the New York Times, The Wall Street Journal, and the magazine Foreign Policy, one might consider starting in late December on a bitter cold ridge in northern Wyoming, where 81 men of the U.S. Army’s 18th Infantry Regiment were pursuing some Indians over a rocky ridge.

The year was 1866 and the U.S. was at war with the local tribes — Sioux, Cheyenne, and Arapaho — in an attempt to open a trail into the Montana gold fields. The fighting was going badly for an army fresh from the battlefields of the Civil War.

The time and place was vastly different, but the men who designed the war against Native Americans would be comfortable with the rationale that currently impels U.S. foreign policy. In their view, the Army wasn’t fighting for gold in 1866, but was embarked on a moral crusade to civilize the savages, to build a shining “city on a hill,” to be that “exceptional” nation that stands above all others.

The fact that this holy war would kill hundreds of thousands of the continent’s original owners and sentence the survivors to grinding poverty was irrelevant.

Is that so different from the way the butcher bills for the U.S. invasions of Afghanistan and Iraq, the overthrow of Libya’s government, and the Syrian civil war is excused as unfortunate collateral damage in America’s campaign to spread freedom and democracy to the rest of the world?

The Roots of Exceptionalism

“We came, we saw, he died,” bragged then U.S. Secretary of State Hillary Clinton about the murder of Libyan leader Muammar Gaddafi. Libya is now a failed state wracked by civil war — and a major jumping off place for refugees fleeing U.S. wars in Yemen, Somalia, Iraq, and Afghanistan.

In his book The True Flag: Theodore Roosevelt, Mark Twain, and the Birth of American Empire, author and former New York Times reporter Stephen Kinzer traces the roots of this millenarian view that America’s mission was to “regenerate the world.” That this crusade was many times accompanied by stupendous violence is a detail that left unexamined by the people who designed those campaigns.

Kinzer argues that this sense of exceptionalism was developed during the Spanish-American War (1898) that gave the U.S. colonies in Cuba, Puerto Rico, Guam, and the Philippines. But, as John Dower demonstrates in his brilliant book on World War II in the Pacific, War Without Mercy, that sentiment originated in the campaigns against Native Americans. Indeed, some of the same soldiers who tracked down Apaches in the Southwest and massacred Sioux Ghost Dancers at Wounded Knee would go on to fight insurgents in the Philippines.

The language has shifted from the unvarnished imperial rhetoric of men like Roosevelt, Henry Cabot Lodge, and Senator Albert Beveridge, who firmly believed in “the white man’s burden” — a line from a poem by Rudyard Kipling about the American conquest of the Philippines.

Today’s humanitarian interventionists have substituted the words “international” and “global” for “imperial,” though the recipients of “globalism” sometimes have difficulty discerning the difference.

At the ideological core of exceptionalism is the idea that American, in the words of former U.S. Secretary of State Madeleine Albright — and repeated by presidential candidate Hillary Clinton — is the “one essential nation” whose duty it is to spread the gospel of free markets and democracy.

On the surface there appear to be sharp differences between what one could call “establishment” foreign policy mavens — like Zbigniew Brzezinski, Paul Wasserman, Jonathan Stevenson, and Robert Kagan — and brick tossers like Stephen Bannon, Sebastian Gorka, and Stephen Miller.

To a certain extent there are. Bannon, for instance, predicts a major land war in the Middle East and a war over the South China Sea. Next to those fulminations, liberal interventionists like Kagan, and even neoconservatives like Max Boot, seem reasoned. But the “old hands” and sober thinkers are, in many ways, just as deluded as the Trump bomb throwers.

A case in point is a recent article by the Brookings Institution’s Kagan entitled “Backing Into World War III,” in which he argues the U.S. must challenge Russia and China “before it is too late,” and warns that “accepting spheres of influence is a recipe for disaster.”

Kagan has generally been lumped in with neo-cons like Boot, Paul Wolfowitz, Elliot Abrams, and Richard Perle — the latter three of whom helped design the invasion of Iraq — but he calls himself a liberal interventionist and supported Hillary Clinton in the last election. Clinton is a leading interventionist, along with former UN representative Samantha Power and former National Security Adviser Susan Rice.

“China and Russia are classic revisionist powers,” Kagan posits. “Although both have never enjoyed greater security from foreign powers than they do today — Russia from its traditional enemies to the west, China from its traditional enemy in the east — they are dissatisfied with the current global configuration of power. Both seek to restore hegemonic dominance they once enjoyed in their respective regions.”

Those “regions” include Central and Eastern Europe and Central Asia for Russia, and essentially everything west of the Hawaiian Islands for China.

For Kagan this is less about real estate than “the mere existence of democracies on their borders, the global free flow of information they cannot control, [and] the dangerous connection between free market capitalism and political freedom.” All of these things, he says, “pose a threat to rulers who depend on keeping restive forces in their own countries in check.”

There are times when one wonders what world people like Kagan live in.

As Anatol Lieven, a foreign policy researcher, journalist, and professor at Georgetown University in Qatar, points out concerning Russia, “A child with a map can look at where the strategic border was in 1988 and where it is today, and work out which side has advanced in which direction.”

The 1999 Yugoslav War served as an excuse for President Bill Clinton to break a decade-old agreement with the then Soviet Union not to recruit former members of the Warsaw Pact into NATO. In the war’s aftermath, the western coalition signed up Bulgaria, the Czech Republic, Hungary, Poland, and Romania.

For the first time in modern history, Russia had a hostile military alliance on its borders, including American soldiers. Exactly how this gives Russia “greater security” from her enemies in the West isn’t clear.

Of course, in a way, Kagan has a dog in this fight. His wife, former Assistant Secretary of State for Europe and Eurasian Affairs Victoria Nuland, cheer-led the 2014 coup that overthrew Ukrainian President Victor Yanukovych. Prior to the coup, Nuland was caught on tape using a vulgar term to dismiss peace efforts by the European Union and discussing who would replace Yanukovych. Nuland also admitted that the U.S. had spent $5 billion trying to influence Ukraine’s political development.

As Lieven argues, “Russia’s intervention in Ukraine is about Ukraine, a country of supreme historical, ethnic, cultural, strategic, and economic importance to Russia. It implies nothing for the rest of Eastern Europe.”

Kagan gives no evidence of Russia’s designs on Central Asia, although one assumes he is talking about the Shanghai Cooperation Organization. Since that trade and security grouping includes China, India, and Pakistan, as well as Kyrgyzstan, Tajikistan, Uzbekistan, and Kazakhstan — Iran has also applied for membership — exactly how Russia would “dominate” those countries is not clear.

Kagan’s argument that “accommodation” with Russia only encourages further aggression is, according to Lieven, a “view based upon self-deception on the part of western elites who are interested in maintaining confrontation with Russia as a distraction from more important, painful problems at home, like migration, industrial decline, and anger over globalization.”

As for “free market capitalism,” the fallout from the ravages that American-style capital has wrought on its own people is one of the major reasons Donald Trump sits in the Oval Office.

Meanwhile, according to Kagan, who offers no evidence, U.S. allies in Asia are “wondering how reliable” the U.S. is given its “mostly rhetorical” pivot to Asia, its “inadequate” defense spending,” its “premature” and “unnecessary” withdrawal from Iraq, and its “accommodating agreement with Iran on its nuclear program.”

Again, one wonders through what looking glass the Brookings Institution views the world.

The U.S. has more than 400 military bases in Asia, has turned Guam into a fortress, deployed Marines and nuclear-capable aircraft in Australia, and sent six of its 10 aircraft carriers to the region. It spends more on defense than most of the rest of the world combined. The illegal invasion of Iraq was an unmitigated disaster, and Iran has given up its nuclear enrichment program and its stockpile of enhanced uranium.

But in a world of “alternative facts,” the only thing that counts is that the U.S. no longer dominates the world as it did in the decades after World War II. “Only the United States has the capacity and unique geographical advantages to provide global security and relative stability,” writes Kagan. “There is no stable balance of power in Europe or Asia without the United States.”

The fact that the “security” and “stability” that Kagan yearns for has generated dozens of wars, a frightening nuclear arms race, growing economic inequality, and decades of support for dictators and monarchs on five continents never seems to figure into the equation.

Where the politics of Trump fits into all this is by no means clear.

If the president goes with Bannon’s paranoid hatred of Islam — and given conspiracy theorist and Islamophobe Frank Gaffney has also advised the president, that is not a bad bet — then things will go sharply south in the Middle East. If he pushes China and follows Bannon’s prediction that there will be a war between the two powers, maybe it’s time to look at real estate in New Zealand, like a number of billionaires — 40 percent of whom are Americans — are already doing.

But no matter which foreign policy current one talks about, the “indispensable nation” concept — born out of the Indian and Spanish-American wars “weighs like a nightmare on the brain of the living,” as Karl Marx wrote in the 18th Brumaire.

A century and a half ago on a snowy Wyoming ridge, a company of the 18th Infantry Regiment discovered that not everyone wanted that “shining city on a hill.” From out of a shallow creek bed and the surrounding cottonwoods and box elders, the people whose land the U.S. was in the process of stealing struck back.

The battle of Lodge Pine Ridge didn’t last long, and none of the regiment survived. It was a stunning blow in the only war against the U.S. that Native Americans won. Within less than two years, the Army would admit defeat and retreat.

In the end, though, the Indians were no match for the numbers, technology, and firepower of the United States. Within a little more than three decades they were “civilized” into sterile, poverty-ridden reservations where the only “exceptionalism” they experience is the lowest life expectancy of any ethnic group in the United States.

The view that America’s institutions and its organization of capital are superior is a dangerous delusion and increasingly unacceptable — and unenforceable — in a multi-polar world. The tragedy is how widespread and deep these sentiments are.

The world isn’t envious of that shining “city on a hill.” Indeed, with Trump in the White House, “aghast” would probably be a better sentiment than envy.