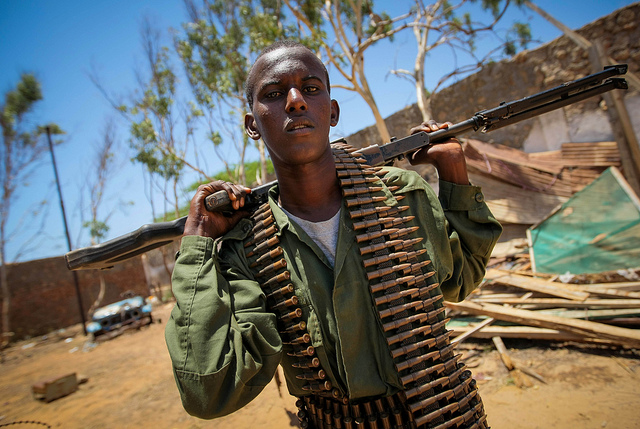 No “Cake Walk” for Kenya in Somalia

When Kenya invaded Somalia in 2011, it overturned a 48-year-old policy of not involving itself in the armed conflicts of its neighbors—and now innocent Kenyans are paying the price.
By David Zarembka | September 27, 2013

When Kenya invaded Somalia in October 2011, it overturned a wise, 48-year-old policy of not involving itself in the armed conflicts of its neighbors—and Uganda, Sudan, South Sudan, Ethiopia, and Somalia have all had times of conflict. In the best cases—as with South Sudan’s secession from Sudan—Kenya, as a neutral country, was able to broker a peace agreement between the warring parties. As a belligerent in Somalia it will have no such possibility.

The invasion of Somalia came quite unexpectedly. It was not much discussed in the media, and even the U.S. State Department and military advisers in Kenya seemed to have been surprised by it. It seems that Kenyan officials, like official Washington when the United States invaded Iraq, thought that the invasion would be a “cake walk,” confidently announcing that the disputed port of Kismayo would be taken within a month. They assumed that since their army was better armed and organized, they would easily defeat the ragtag al-Shabaab.

This was delusional. The invasion of Somalia happened at the height of the rainy season so, as with Napoleon and Hitler’s invasions of Russia, Kenya’s big armaments, tanks, and trucks soon became submerged in mud. It took Kenyan troops almost a year to take Kismayo.

More significantly, Kenya, like the United States, does not seem to understand asymmetrical warfare. War in the eastern part of Africa is not like the U.S. Civil War or World War I, where gigantic armies lined up, attacked, and shot at each other. The Kenyan military, employing what is called in Washington the “Powell doctrine” of overwhelming force, “conquered” Kismayo in this old-fashioned way, leaving overwhelmed al-Shabaab fighters to evaporate into the local population. But this victory was incomplete, as terrified shoppers discovered recently in Nairobi.

Kenya should have realized something like this was coming.

Al-Shabaab had attacked soft targets in the past. In July 2010, in retaliation for Ugandan troops joining the Africa Union mission in Somalia, al-Shabaab bombed two Kampala restaurants where people were watching the World Cup, killing 74 people. Al-Shabaab had similarly threatened to attack soft targets in Kenya after the invasion, even indicating that the target might be one of the upscale malls where wealthy Kenyans and expatriates frequented.

Over the last two years, there have been a number of terrorist attacks by al-Shabaab and its supporters in Kenya. Many were simple attacks, where a person on a motorcycle would throw a grenade at a bus stop or someplace else where people were gathered—a common tactic in this region. In a number of instances, attackers crossing the Somali border in northeastern Kenya targeted government posts and vehicles, or sometimes aid workers. But these attacks landed far from thickly populated southern Kenya, and so remained out of mind for the majority of Kenyans.

Compared to the previous attacks in Kenya, the Westgate Mall attack was well organized, thoroughly planned, and well resourced. The Kenyan newspapers claim that this is the dying gasp of a defeated enemy pleading for relevance, but I would think that this is another delusion. As long as Kenya keeps its military in Somalia, al-Shabaab will remain in the shadows, ready to attack now and then when the opportunity arises.

This dynamic is driven in part by financing from the United States and its allies, since the African Union forces in Somalia are paid for mostly by the United States, United Kingdom, France, and other EU countries. If they didn’t pay, there would be no foreign armies in Somalia. In Burundi and Uganda, soldiers are reportedly paid around $100 per month (if their commanders don’t embezzle their pay), while as part of the AU forces they are paid $1000 per month (and much more likely to get it). So there is great competition among the soldiers back home to be appointed to go to Somalia.

Since the attack, Kenyan authorities have yet to acknowledge that the vast majority of the region’s Muslims condemn the violence as much as anyone else. Likewise, no one is cautioning that the 2 million Kenyan Somalis and the almost 1 million Somali refugees in Kenyon are also totally innocent of this crime. There is a real danger—as experienced by Muslims, Sikhs, and people of Middle Eastern descent in the United States after 9/11—that the Kenyan government will use this attack to curtail civil liberties, commit ethnic and religious profiling, and challenge anyone who opposes state policies as unpatriotic, potentially leading again to a repressive autocracy reminiscent of the Moi years.

What is the solution? Talking. This is what ends every war and conflict. This is already occurring in Somalia and in North Kivu in the eastern Congo. But the antagonists are not going to engage in dialogue until they are pushed by others, particularly the international community. The United States in particular has the leverage to drive negotiations, since it controls the purse strings.

The U.S. government, along with its hawkish allies at the United Nations, seems averse to this approach. But in the absence of a negotiated settlement, innocent Kenyans and their neighbors in the region will continue to reap the deadly harvest of an asymmetric war.