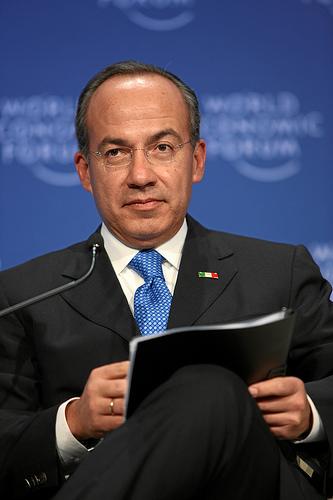 U.S.-Mexican relations might look at little different in the age of Obama, but the Bush-era priorities remain the same.
By Manuel Perez-Rocha | May 24, 2010 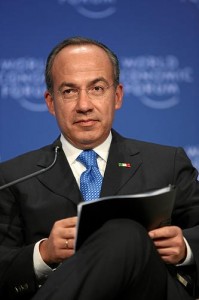 Mexican President Felipe Calderón came to the United States last week assuming the moral high ground as a victim of U.S. drug consumption and weak gun laws. In his speech before the U.S. Congress, Calderón firmly called on the United States to take concrete steps to cut the traffic of high-caliber arms and illicit money from the United States to Mexico, and reform its immigration policies, particularly Arizona’s new anti-immigrant law. By contrast, President Barack Obama had nothing but words of support for his southern neighbor.

Obama has already accepted shared U.S. responsibility for the drug-related violence in Mexico, and he also disagrees with Arizona’s new law. But given his inability to do much about these issues in Congress, he could do little more than nod at Calderón. He told Calderón that he is committed to immigration reform, but that he needs 60 percent of the Senate to get it passed. As a peace offering, Obama expressed his total support for Calderón’s efforts in Mexico.

This was a huge missed opportunity to address problems in both countries that could lead to healthier U.S.-Mexico relations. It’s a shame, for example, that while Calderón focused on human rights issues related to U.S. immigration policy, he said nothing about his own regime’s systematic violations of fundamental worker rights in Mexico. Despite protests from Mexican and U.S. unions, Obama continued to turn a blind eye to Calderón’s intent to dismantle independent democratic unions. In response to Calderón’s decision to bust an electricity union, 93 workers have been on a hunger strike for more than three weeks. Although Calderón is correct in speaking out against racial profiling in Arizona, his government is also violating human rights of Mexicans at home.

Calderon also got away with presenting an absurdly rosy picture of Mexico’s economic and social reality. He told Congress that Mexico is recovering from the crisis, and that its economy is becoming competitive and “capable of generating the jobs Mexicans need.” He talked about the thousands of jobs created during his administration, but not about the millions that have been lost (in 2009 alone, approximately one million jobs were lost). Insufficient job creation has been a trend during the 16 years of the North American Free Trade Agreement (NAFTA), and it has only increased Mexican migration to the United States. Despite this, Obama has backed down to pressure from Calderón to abandon his campaign promise of revising NAFTA.

Obama’s unwillingness to confront Calderón on Mexico’s grave deficit on human rights — complaints about abuses of the military have increased tenfold during this presidential term — needs to be considered from a broader political and economic perspective. Mexico remains of critical importance to U.S. security and economic expansion in the hemisphere, and Calderón is a subservient ally.

While Obama has written off the infamous, Bush-led Security and Prosperity Partnership (SPP) of North America, its main elements persist in today’s bilateral relations. Some of the terminology has changed: the “smart border,” for example, is now the “21st-century border.” However, U.S. priorities continue to be deregulating trade, enforcing intellectual property rights, and guaranteeing “energy security in North America” to meet the energy needs of the United States. The United States has channeled more than $1.3 billion into security operations in Mexico. Although violence in Mexico continues to soar, claiming more than 23,000 lives since Calderón took office, the Obama administration continues to back Calderón’s failed military strategy to curb drug trafficking. And Washington seems to care very little about addressing the root causes of Mexico’s poverty and migration.

Calderón’s visit to Washington was yet another sign that the priorities in the U.S.- Mexico relationship haven’t changed much since Bush’s days in office.

Manuel Perez-RochaManuel Pérez-Rocha is an associate fellow at the Institute for Policy Studies.