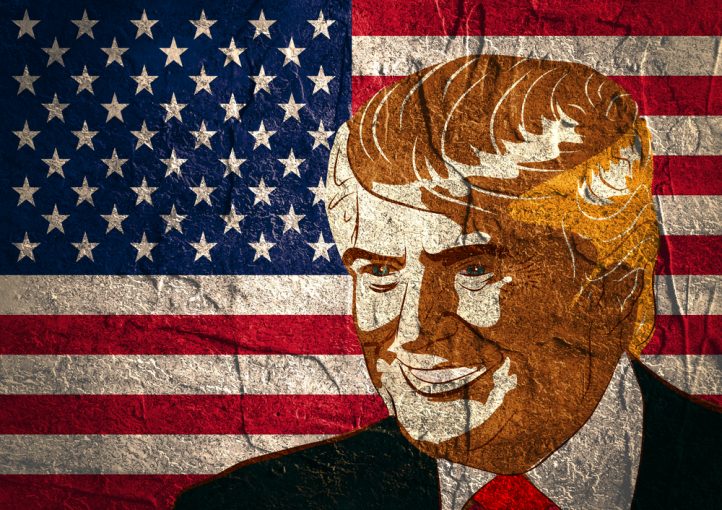 In the wake of the disastrous G7 meeting in Canada and the successful summit in Singapore, it’s hard to know what to call U.S. foreign policy these days.

It’s not just unilateralism, where Washington acts alone and allies be damned. Nor is it merely unipolarism, in which the United States targets all hegemonic challengers in an effort to preserve its position as the world’s dominant military and economic power.

According to unileaderism, only the U.S. president makes foreign policy decisions of any import. Those decisions do not betray any strategic thinking. They may well be contradictory. And they often leave other members of the administration — not to mention Congress and the American people — totally baffled.

Unileaderism, at least as it’s embodied by Donald Trump, is a philosophy bound up entirely in the personal quirks of the president himself. Instead of strategy, there are only tactics: wheedling, bluffing, threatening. It’s like playing tennis against someone with John McEnroe’s legendary temper and will to win, but few if any of his actual skills.

Neither unilateralism nor unipolarism can explain the spectacle of the last week, when Trump blasted U.S. allies at the G7 meeting in Canada and then blasted off for Singapore to negotiate with the leader of the longest standing adversary of the United States. Only unileaderism can capture this surreal reversal of traditional U.S. foreign policy norms.

The summit with Kim Jong Un was Trump at his most theatrical. He flattered the North Korean tyrant and signed a declaration of little substance. He showed off his limousine. He played Kim a White House-produced video crafted to appeal to the North Korea leader’s vanity and nationalism (for instance, by juxtaposing images from North Korea with those from around the world, by barely mentioning South Korea, and by ignoring China and Japan altogether).

Don’t get me wrong: I’m thrilled that Trump sat down with Kim and initiated a détente between the two countries. Trump’s pledge to stop war games with South Korea is a major step forward. As for the declaration, it was a good thing, not a bad thing, that it didn’t go into details. North Korea doesn’t want to denuclearize immediately, and Trump doesn’t really understand the particulars of the process anyway. Anything more detailed would have been a conversation stopper.

But the mutual respect that the two leaders expressed was all about unileaderism: their preference to rule without any regard for democracy or human rights. The format of their 30-minute colloquy was telling: just the two leaders with their translators and no advisors. It was a throwback to the diplomacy of yesteryear, when royals met to determine the boundaries of their respective kingdoms.

The contretemps in Quebec was far more disturbing. Trump refused to sign the G7 declaration, continued to pursue tariffs against major U.S. trading partners, and insulted Canadian leader Justin Trudeau to boot. It was an extraordinary display of presidential pique.

Trump’s tantrum about Trudeau divided his administration into those who leapt into the fracas to slap the Canadian prime minister and those who shifted into high gear to repair the fraying U.S. relationship with its northern neighbor. U.S. Trade Representative Robert Lighthizer continued to work with his Canadian counterparts to negotiate a new NAFTA. But White House trade advisor Peter Navarro sided with Trump by saying that “there’s a special place in hell” for Trudeau — the kind of epithet once reserved for the mortal enemies of the United States.

It was like something out of Canadian Bacon, the satirical 1995 film about a president hoping to boost his dismal popularity by promoting a war against the Canucks. Has America been suddenly plunged into wag-the-beaver territory?

Meanwhile, Trump’s proposal to bring Russia back into the G7 caught many of his colleagues off guard, including the National Security Council. Methinks the NSC doth protest too much. This is the same president who congratulated Russian President Vladimir Putin on his recent electoral win even though his aides had written “DON’T CONGRATULATE” in all-caps on his briefing notes. This president delights in ignoring even is closest “advisors.”

Trump’s invite to Russia is no surprise. The president wants his buddies at the G7. Angela Merkel is not his buddy. Vladimir Putin is. Trump treats world affairs like it’s an elementary school club.

Unileaderism may well be the logical endpoint for a country that has used unilateralism to preserve its unipolarism. And Trump is certainly the product of a particular tendency within the U.S. political culture that rejects liberalism and multilateralism.

But it goes beyond that. In its rejection of strategy in favor of tactics, Trumpism is a repudiation of geopolitics altogether. Trumpism isn’t a new kind of opening in the chess game of international relations. The president, out of rage and stupidity and arrogance, has simply picked up the board with all of its pieces and flung the whole thing against the wall. He’s playing a different game altogether.

Ordinarily when pundits come up with a doctrine to define an administration’s approach to the world, they put a label on a collective stance — even though the label inevitably goes by the president’s name.

In the case of the Trump doctrine, however, the philosophy points more to the president’s gut instincts rather than an approach hammered out by a group of “Vulcans” (in the case of George W. Bush) or a set of liberal internationalists (Barack Obama). The Trump doctrine boils down to Trump. And the word “doctrine” is something of an overstatement.

In this week’s Atlantic, Jeffrey Goldberg canvassed administration officials for their one-sentence characterization of this Trump Doctrine. Goldberg narrowed it down to the pugnacious phrase: “We’re America, Bitch.”

The phrase reveals the Trump approach for what it is: sexual harassment.

When he calls other leaders “weak,” Trump is resorting to the old playground epithet: they are “pussies.” And, as he put it so indelicately in the Access Hollywood tape, he feels perfectly free to grab them by the pussies. The president is using the power invested in his office to take what he wants.

Rape, it has often been said, is not about sex: it’s about power. Having divided the international community into female (Angela Merkel, Emmanuel Macron, Justin Trudeau) and male (Vladimir Putin, Xi Jinping, Kim Jong Un), Trump is now buddying up with his locker-room pals and boasting of how’s taken advantage of the “weaker sex.”

To Trump’s followers, “We’re America, Bitch” could be understood as a middle finger directed at a cold and unfair world, one that no longer respects American power and privilege. To much of the world, however, and certainly to most practitioners of foreign and national-security policy, “We’re America, Bitch” would be understood as self-isolating, and self-sabotaging.

Sexual harassment, thanks to the #MeToo movement, has become self-sabotaging. Has the G7 just had their #MeToo moment? Perhaps America’s top allies are finished with appeasing Trump and saying “yes” when they really mean “no.” I look forward to the photo op with Merkel and Macron both wearing their pink pussyhats in solidarity with Trump protesters worldwide.

The End of Geopolitics?

The G7 represents the liberal international order: an attempt by the world’s top economies to manage disputes and develop a common commitment to certain principles like free trade. The grouping is an acknowledgment that global capitalism can’t survive by the “invisible hand” alone and needs the guidance of many hands.

The G7 has been spectacularly ineffective in addressing the major issues of the time: global poverty and inequality, climate change, pandemics. It doesn’t represent robust multilateralism. It leaves out obvious players like China and India. It makes no effort to represent voices of the powerless.

Still, the G7 has been a very modest check on both U.S. unilateralism and unipolarism. And now it’s emerging as a counterbalance to Trump’s unileaderism. The president’s combative trade policies and indiscriminate use of personal invective are uniting much of the world against the United States. The approval rating of the United States, across 134 countries, dropped in two years from 48 percent to 30 percent, according to a 2018 Gallup poll.

On the other hand, the American public’s satisfaction with U.S. standing in the world reached a 13-year high in 2018, a worrisome sign for those of us pushing for progressive foreign policy alternatives. Trump’s unileaderism strikes a chord with a segment of the American public. It’s not just the Russians who crave an “iron fist” leader.

Trump’s tactics run afoul of the basic laws of geopolitics: identifying long-term goals, developing corresponding strategies, and cultivating key allies to achieve those goals. The allies that Trump has cultivated — Poland, Hungary, Russia, North Korea, the Philippines — don’t advance any particular national security interests. They reflect only the personal preferences of Trump himself.

According to a progressive take on foreign policy, the United States should relinquish its unipolar status as part of a transition to a peaceful multilateral order. Trump’s unileaderism won’t, in the end, preserve this unipolar status. It will ultimately destroy the international community and the very possibility of geopolitics. As the United States sinks further into aggressive resentment, the world will splinter into hundreds of “Make [My Country] Great Again” warring factions.

Beginning with the Reagan administration, the concept of a “unitary executive” has gathered force in both constitutional law and presidential practice. According to this theory, the president controls the entire executive branch. So, for instance, George W. Bush expanded presidential power through his use of signing statements that reinterpreted legislative decisions.

Trump has taken this concept to a whole new level with his meddling in the Russiagate investigations and his willingness to pardon everyone indicted in the matter, even himself. Here’s a president who can’t seem to wait to get rid of his chief of staff because he no longer wants to have anyone managing him. Trump can’t be bothered with briefings because he prefers to make decisions based on some cocktail of his own hormonal urges and what he gleans, often mistakenly, from Fox News.

Unileaderism raises the doctrine of the unitary executive to the power of 10. It’s bad enough that a deeply insecure man-boy has latched on to this doctrine. Much worse will happen when a canny adult adopts the same approach. Trumpism without Trump would finalize America’s descent into the maelstrom.